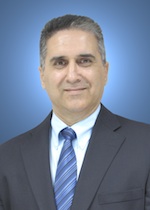 May 13, 2014, New York, NY. – FlightSafety International announces that Tasneem Hashmi has been appointed Manager of the company’s Learning Center in Toronto, Ontario. He succeeds Patrick Coulter who has been named Director, Business Development, Commercial Training.

May 13, 2014, New York, NY. – FlightSafety International announces that Tasneem Hashmi has been appointed Manager of the company’s Learning Center in Toronto, Ontario. He succeeds Patrick Coulter who has been named Director, Business Development, Commercial Training.

“Tasneem consistently goes above and beyond to respond to the needs of our Customers,” said Daniel MacLellan, Vice President Operations. “We recognize and appreciate his leadership skills, experience, and commitment to provide the outstanding training and Customer service FlightSafety is recognized for around the world.”

Tasneem has held a number of positions of increasing responsibility since joining FlightSafety in 1999 at the Toronto Learning Center. He started as a ground school and simulator instructor for the Twin Otter. Tasneem then served as Program Manager for FlightSafety’s Twin Otter and Bombardier Dash 8 training, Quality coordinator, and Manager of the Center’s Safety Management System. He was promoted to Director of Training in 2001 and most recently served as Assistant Center Manager.

He earned a Master of Science degree in Management and Strategic Leadership from New England College in New Hampshire. He graduated from the University of Wolverhampton in the United Kingdom with a Bachelor of Arts degree in Business Studies, and completed FlightSafety’s Senior Leadership training program. Tasneem holds Airline Transport Pilot certificates issued by the FAA and Transport Canada, and a Dash 8-400 type rating. He was a pilot for Union Texas Petroleum and Exxon Mobil prior to joining FlightSafety.

FlightSafety’s Toronto Learning Center is equipped with 9 flight simulators. It offers training for the Bombardier Dash 6, Dash 7, Dash 8 100/200/300, and Q400 aircraft, as well as the Beech 1900D.
FlightSafety International is the world’s premier professional aviation training company and supplier of flight simulators, visual systems and displays to commercial, government and military organizations. The company provides more than a million hours of training each year to pilots, technicians and other aviation professionals from 167 countries and independent territories.