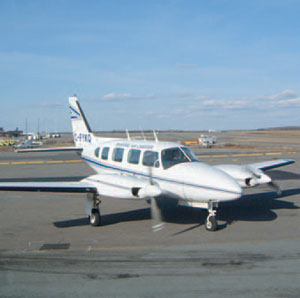 Despite ever-increasing fuel prices, Canada’s fixedwing charter
industry is in good financial health. The only disagreement among
industry people contacted by WINGS magazine is over just how good their
business is. In Halifax, “Business is holding fairly steady,” says
Steven Christiansen, president of Maritime Air Charter. MAC flies four
prop aircraft: two Piper Navajos, an Islander, and a Beechcraft King
Air A-100.

“Business
is going well,” says Adam Penner, operations manager of Harv’s Air
Service in Steinbach, Manitoba. “We have our loyal clientele in
northwestern Ontario and central Manitoba, and they continue to stick
with us.” Including aircraft used for its flight school, Harv’s Air has
13 Cessna 152s, five Cessna 172s, two Citabria 7-ECAs, a Piper Warrior,
a rebuilt 1944 Taylor Craft L2 C-FGER and a Pitts S2B biplane. In the
twin-engine category, Harv’s Air has a Twin Beech 95, a Twin Piper
Seneca and a Navajo.

“The fixed-wing charter business is
excellent,” says Larry Libman, president of Corporate Aircraft Charters
in Montreal. “As an international charter broker, we get requests from
everywhere.” By virtue of being a broker, CAC’s aircraft inventory
changes on an ongoing basis. However, according to its website, the
company offers everything from de Havilland Beavers and Bell JetRanger
206s to Navajos and King Airs; plus business jets (Challengers,
Citations, Gulfstreams, and Lears). As well, if you should want to book
a business-configured Airbus A319, Boeing 727, 737 or 757, CAC can
supply them.

WHO’S FLYING CHARTER
So who are the customers who are keeping Canada’s fixed-wing charters busy?

Libman
says they come from all over the spectrum. “We do a lot of flying for
mining and resources companies, native businesspeople, film and
entertainment, sports teams, and emergency and fire crews,” he says.
“Overall, we have a very diversified client base.”

“Our
customers are mainly business people out of Halifax,” says Maritime
Air’s Steve Christiansen. “We also serve a lot of government
passengers.”

“We’re flying people all over the north,” says
Dylan Fast. “Although a number of people fly with us for the
destinations we can reach, many are former commercial travellers who
have become dissatisfied with the airlines.”

FACING CHALLENGES
Even
in an industry that’s experiencing good times, there are many obstacles
that hamper fixed-wing charter operators. Of these, “The biggest
challenge is to try to keep costs down in the face of big increases in
fuel prices,” says Christiansen. “We also still coping with the huge
rise in insurance costs a few years ago, when the rates were
effectively doubled. They have stayed steady since then, but the
increases haven’t been reduced at all.”

“Fuel costs are a big
challenge,” agrees Fast, but they are fairly easy to deal with. That’s
because “we just pass the cost onto the customer,” Penner of Harv’s Air
says. “They grumble about it, but everyone is in the same boat. Anyone
who drives a car understands what we’re going through.”

Government
regulations are another headache for Canada’s charter operators. In
particular, “the bond that the Americans now require for using their
airports is a real problem,” says Penner. “It’s about $2,000 an
aircraft, and you don’t get much for it. It’s my understanding that the
bond will pay your fine if you do something wrong with US Customs, but
that’s about it. They’re just making sure they get their money; meaning
that you’re guilty until proven innocent. For us, the $2,000 bond is a
cost that pops out of nowhere. It forces you to decide which of your
aircraft will serve the States, and which will not. That restricts your
flexibility.”

“I don’t have any issue with better security, but
the paperwork and bureaucracy that goes with it is such a pain,” adds
Maritime Air’s Christiansen. “The system is designed for airline
carriers, including the requirement to use very expensive passport
readers. For charter services such as ourselves, the cost is
prohibitive.”

Making matters worse is that when government
officials mess up, it’s the charter operators that end up paying for
their mistakes. In one instance, “Maritime Air Charter Ltd. was
threatened with a $35,000 fine due to Homeland Security’s incomplete
database,” says Chirsitansen. “We were told in no uncertain terms that
we would be fined on landing, and it was up to us to prove that the
error was theirs. Not all DHS personnel are that bad, but if you get
someone nasty or who got out of the wrong side of the bed that morning,
their individual powers are scary.”

Then there’s marketing:
Although the air charter business is doing well, there’s no doubt that
more travellers would use this service if they only knew it existed. To
make this happen, “we are trying to educate travel agents as to the
benefits of charters,” says Christiansen. “A few of them are onboard,
but for most travel agents, charter is a little blip on their radar.”

The
next big challenge, as far as Corporate Aircraft Charters is concerned,
is finding the leased aircraft space that customers want. “For us, the
big problem is inventory,” Libman explains. “It’s hard to get access to
enough aircraft, especially jets in the 25-passenger category. They
don’t build many aircraft that can hold this number of people. The
Falcon 900 can hold 16, but to hold more than that, you’ve got to use a
727-200, 757 or Airbus configured for 50-60 businesspeople. The trouble
is that these larger aircraft are expensive; you don’t hold the price
down just because these planes have been configured to only hold 50
seats.”

BIG CHANGES AHEAD?
Today, Canada’s fixed-wing
charters rely on prop planes. They have to; in most cases, comparable
jet transports are just too expensive to buy and maintain. However,
this may soon change as VLJs (Very Light Jets) make their presence
known in the aviation world. Built to have a maximum takeoff weight
under 10,000 pounds, they can seat between three and six passengers.
VLJs are meant to compete with prop planes on purchase, operational and
maintenance costs.

Among the VLJs that are available now or
coming to market soon are the Eclipse 500, Cessna Citation Mustang, the
Adam A700 AdamJet, and Diamond Aircraft Industries’ D-JET. Meanwhile,
if you’re a charter operator who wants to sell your passengers a
thrilling ride, get an ATG Javelin Mk.10. Powered by a pair of Williams
FJ33 turbofans, the two-seat ATG Javelin looks like a T-38 jet trainer
with an F18’s twin tail, thanks to the Javelin’s seat-behind-seat
cockpit arrangement, fighterstyle fuselage and clear fighterstyle
canopy.

“We see ourselves moving into VLJs,” says Dylan Fast.
“We still have yet to have one certified in Canada, but eventually that
will come.”

“When they get VLJs into service, it will be
tremendous for the air charter business,” enthuses Larry Libman.
“Compared to conventional business jets, they cost 50 per cent less to
buy and operate. This should result in us being able to offer a 35-40
per cent lower ticket price for flights from Montreal to Toronto, New
York and Chicago. This should increase our closing rate by at least 50
per cent.” Does this mean that VLJs are the ‘Next Big Thing’, as far as
fixed-wing charters are concerned? On this point, operators disagree.

“If
the VLJs do what their makers say they’ll do, they’ll obsolete the
Navajos and the KingAirs,” adds Adam Penner. “People like jets, while
prop planes are looked down upon. Plus, the VLJs should go twice as
fast and twice as high as props, and be far more comfortable to fly in.”

“I
don’t think they’ll put props out of business,” counters Fast. “Yes,
VLJs will fill a niche market for two to four passengers. But we are
still doing a lot of flights up north where we’re carrying seven to
eight passengers. The VLJs can’t replace the props that carry them, but
I can see them creating a new market.”

A BUSY, BRIGHT FUTURE
Even
with the challenges that they face, it is clear that Canada’s
fixed-wing charter operators are well positioned to profit in the years
ahead. As commercial airline service declines in quality and coverage,
charters are a natural alternative for first-class travellers, and
those business passengers who are fed up and willing to pay more for a
better travelling experience.

Meanwhile, the advent of VLJs will
make jet aircraft more affordable and accessible for air charter
operators, allowing them to offer an enhanced level of service at
prices customers should be willing to pay. Put it all together, and
it’s a good time to be in the fixed-wing charter business – especially
if you can justify buying a fighter-like ATG Javelin Mk.10 for your
company!