Why are we not attracting enough new pilot recruits? 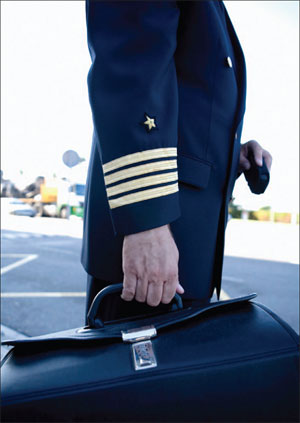 Maybe it’s that I’m of an age when I realize that I will never again be
allowed to wear a Speedo in public. Or perhaps it’s that I’ve had my
first ride in an ambulance (“Hello dear. I’ve missed my plane.
Something’s come up…”) Whatever it is, I’ve been thinking about the
aviation industry workforce and the impact of its aging upon the future
of the industry.

Aviation
is particularly dependent upon the quality of its workforce. Virtually
all industry personnel employed in operational, manufacturing, quality
assurance, training and maintenance certification capacities must hold
valid certifications issued by Transport Canada. We need particular
combinations of certification and experience to fill many requirements
and all critical positions. It takes considerable time to develop the
necessary skill and knowledge to fill those needs. Basic training
programs for commercial pilots and maintenance personnel take two years
to complete. Then add another two to three years of work experience to
season our new pilot or maintenance person. So, say five years to
develop a pilot or maintenance engineer. Clearly, we can’t just go out
and hire appropriately qualified personnel off the street.

Well,
it seemed that we used to do just that. Chief pilots of just a few
years ago tell of the stacks of unsolicited resumés that they received
on a daily basis. They never worried about replacement pilots (or
maintenance personnel or design engineers or anyone else, for that
matter) as there was always an excess supply as close as the telephone.
And if you didn’t like a particular pilot, there was another one out in
the waiting room trying to get in to see you. There were always more
prospective employees than jobs. Pay and working conditions reflected
the relative strength of the employer in the bargain.

Today, the
resumés don’t come in so often and job offers are frequently turned
down by prospective employees. The tide is turning more in favour of
the prospect and the employer has to work harder to recruit new staff.
This is more critical right now for smaller fixed-wing companies as the
major airlines, Jazz, Air Canada and WestJet are all expanding and
recruiting, again. The majors are always able to hire the best that the
industry has to offer – no surprise as they meet the criteria of
bigger, higher, faster, further. Oh, and don’t forget better working
conditions, better pay (eventually) and benefits and more, much more,
time off.

The current hiring binge by the majors is hollowing
out the middle of many small and medium fixed-wing flight departments
who are finding that the pilots they have developed over the past five
years are now moving on to the major leagues. This turnover is making
the issues of personnel replacement and retention much more important,
elevating them to the level of strategic matters for many companies.
Their survival may depend on their ability to adapt to the changed
environment.

Now, those of us who have been around a while have
seen hiring booms before, gone through the high turnover, replacement
hiring and training and then seen the very people that we lost to a
major come back for a job in two years. But we should be careful in
assuming that this time will be the same as in the early eighties and
early nineties. There are fundamental changes taking place in the
demographic structure of the workforce. These changes are happening
slowly, almost imperceptibly, but are steady and unceasing.

The
baby boomers, the group that defined youth culture 50 years ago and who
have influenced every aspect of our lives today, are aging. And, as
always, their passage through the final phases of their working lives
will affect about twothirds of everything.

Transport Canada
maintains extensive historic records of certified personnel
(individuals holding TC-issued licences, authorities, permits and the
like issued under the Aeronautics Act and CARs). I have used some of
this data (thank you, Rick Schobesberger) to look at the pilot
workforce for this article. DEMOGRAPHICS

Pilots, both fixed-wing and rotary, are sticking
with their aviation careers much longer than they did 20 years ago. In
1986, the vast majority of pilots, 67% of fixed-wing pilots and 77% of
helicopter pilots, were under 40 years of age. The proportion of
fixed-wing pilots 55 years of age and over was just 7% of the total
while for helicopter pilots the number was much lower, just 4% of the
total number of pilots. These folks were speaking with their feet.
Aviation was a young person’s game then.

Things change over 20
years. In 2006, the percentage of fixed-wing pilots 55 years old and
over was 13.5%, almost double the 1986 level. Helicopter pilots 55 and
over are now 13% of the total pilot group, an increase of more than
300%. And that’s not all. In 2006 there was a relatively even
distribution of pilots across the age groups. The pronounced under-40
bias is gone, replaced with a slight bias to the over-50 crowd among
fixed-wing.

The boomers are sticking around. Improved working
conditions and equipment have helped, especially for helicopter pilots.
The lack of pension plans for most of those who aren’t employed by a
major company will also be an important factor in keeping pilots on the
job. This should be good news for operators who should have ongoing
access to experienced, senior personnel, right? Yes, mostly. There is a
price that employers must pay for this experienced help.

Boomers
have never been especially docile employees. Mature boomers expect
their employer to recognize and respect the experience and expertise
that they bring. They especially expect that their time will be
respected and well used by their employers. They don’t respond well to
poor planning, disorganization or indifferent leadership. Cheques have
to be on time and the equipment kept in good repair. The employer must
meet high standards to earn the boomer’s respect and loyalty and this
may present some challenges to owners who have traditionally focused on
sales, finance and operations. The soft skills of personnel management
have not traditionally been highly valued where replacement employees
were plentiful.

Pilots still tend to move out of the industry
after 55 years of age. Older boomers, those over 55, are leaving in
large numbers. Where 8% of the fixedwing pilots are between 55 and 59,
only 3.5% are between 60 and 64. Much of this will be the result of the
requirement for pilots in international scheduled service to be 60
years old or less, some will be due to early retirement and
increasingly, others due to loss of medical status.

A SHORTAGE OF YOUNGER PILOTS
At
the other end of the demographic scale, there is significant cause for
concern as young people are not entering the industry in sufficient
numbers to meet the demand for pilots resulting from industry growth
and retirements.

In 1986, 27% of fixed-wing pilots were under 30
years old, the biggest demographic group. There has been a significant
shift over the 20 years to 2006. The ‘under 30s’ remain the largest
single group among fixed-wing pilots at 20% but form a significantly
smaller proportion of the total pilot pool. What’s more, their numbers
have declined from 4,000 in 1986 to 3,630, a drop of nearly10%. The
situation is slightly different for rotary where pilots under 30
comprise about 16% of helicopter pilots, down significantly from 29% in
1986. Their actual numbers are also down 10% to 575 pilots.

The
decline in proportion and in total numbers of pilots under 30 is cause
for concern as it indicates that the industry is falling behind its
needs for new entrants. Significant declines in the numbers of private
pilots and student pilot permits are bellwethers that further emphasize
the seriousness of the situation.

Why are we not
attracting young people? They face a bewildering array of potential
career choices and the competition for their attention is fierce. When
air travel was fresh and exciting, young people would come to us in
great numbers with no effort on our part to attract them. We still
don’t put much effort into promoting employment in the industry even
though the romantic cachet has long since worn off. It’s hard to be
young, fresh and sexy in a commodity marketplace.

The very high
costs of training followed by years of poor pay, indifferent working
conditions and volatile employment don’t help to persuade either
parents or students that aviation is a desirable career choice: $50,000
spent on education to earn $10 an hour. Yeah, right. I’ll get back to
you on that.

So, the good news is that the boomers can probably
be persuaded to stay around and help out. The bad news is that the kids
on whom we have always depended for a supply of willing, cheap labour
are on to us. How will we change their minds?