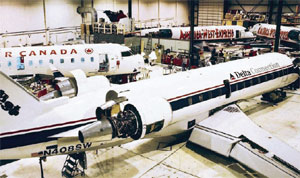 With projects either cancelled or delayed at home, and a shortage of
maintenance slots in the US due to labour limitations, the $3.9 billion
Canadian aircraft maintenance, repair and overhaul sector is leveraging
home field advantage to pursue business opportunities abroad.

Canada,
according to the Canadian Aviation Maintenance Council (CAMC) has
developed a market expertise in turboprop aircraft such as the
Bombardier Q series and is now moving into the burgeoning market for
maintenance of small regional jets such as the Bombardier CRJ. Aircraft
manufacturers like Bombardier and leasing companies such as
International Lease Finance Corporation (ILFC) have put major
conversion projects Canada's way either for clients, or as aircraft are
returned from bankrupt and financially troubled operators.

The
failure of Ansett Airlines in Australia, has resulted in 10 CRJ 200s
and a Dash 8 outside the Calgary hangar of Field Aviation. Once resold,
Field will refurbish and modify the aircraft to the next operator's
specifications. It is projects like these that are opening doors to
foreign operators who might not have previously considered Canadian
companies. Once here the advantages of doing business in Canada become
readily apparent: a skilled and reliable workforce, quick turn-around
times and a low Canadian dollar in an industry where routine labour is
approximately 15% of every invoice.

Nevertheless, AMOs cannot
afford to become complacent. A stronger dollar will place added
pressure for increased labour productivity, while foreign-ownership of
mid-sized companies could see work destined for Canada diverted
elsewhere, although this is not expected to impact on the larger AMOs.