April 20, 2008, Grensboro, NC - Honda Aircraft Company, Inc., has announced plans to expand sales of HondaJet to Europe, beginning in May. 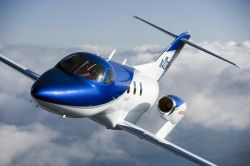 The sales expansion comes as Honda Aircraft Company today finalized its U.S. distribution network with the selection of Albany, New York, as the final location among its five sales and service facilities being established across the country.

Honda's decision to expand sales of its advanced light jet to the rapidly growing European market is in response to strong demand for the aircraft from customers throughout the region. Offering class-leading performance, fuel efficiency, interior cabin space and cargo capacity, HondaJet is well suited to meet the needs of European business and personal light jet owners and operators.

"We are excited to initiate sales in Europe, where we have received a steady stream of inquiries from interested customers who will now have the opportunity to reserve delivery of a HondaJet," said Michimasa Fujino, Honda Aircraft Company president and CEO. "We are committed to providing our customers with both a class-leading product and a sales and service support system that exceed their expectations for private jet ownership and travel."

Honda recently expanded HondaJet sales throughout North America, announcing the establishment of a sales and service strategy for Mexico and Canada. "The expansion of HondaJet sales to Europe is an important step in the continued evolution of our business strategy, which seeks to address the extensive worldwide demand for HondaJet," said Fujino.

Further details regarding the HondaJet European sales and service support strategy and delivery timing will be released by Honda on May 20, 2008, at EBACE.

Construction on all of the U.S. HondaJet sales and service facilities will begin in the near future, and completion is scheduled to coincide with the anticipated certification and first deliveries of HondaJet in 2010.

About HondaJet
Honda Aircraft Company began U.S. sales of the HondaJet in October 2006 and quickly amassed orders for well over 100 units. HondaJet is Honda's first-ever commercial aircraft and lives up to the company's reputation for dynamic performance together with superior efficiency, delivering class-topping cruise speed and fuel efficiency, greater luggage capacity and a more spacious cabin with seating for up to eight people, compared to other similarly sized jet aircraft. All major assembly and testing of the prototype HondaJet has been conducted at the company's existing Greensboro, N.C., facility, which opened in 2001 as an extension of Honda's global R&D operations.

Working closely with the U.S. Federal Aviation Administration (FAA), Honda Aircraft Company anticipates its first test flight of a conforming model in early 2009, with the overall timetable calling for the achievement of type certification in 2010. The company is scheduled to begin deliveries of HondaJet to U.S. customers in 2010. European Aviation Safety Agency (EASA) certification is being pursued concurrently with FAA certification.

Worldwide HondaJet pilot training will be conducted in partnership with Flight Safety International, which will include the development of a Level-D full-motion flight simulator for HondaJet. The first simulator will be installed at Honda Aircraft Company's new headquarters facility. Additional training facilities will be established in the future as HondaJet sales continue to grow.