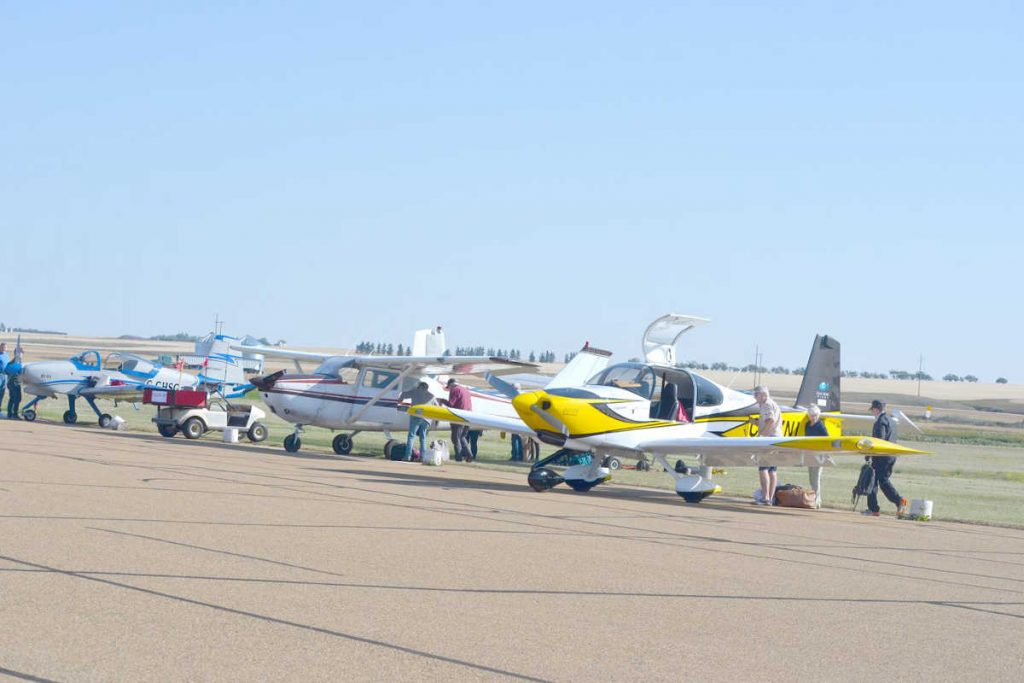 Chief pilot for the Give Hope Wings expedition Dave McElroy prepares for take off from the Drumheller Municipal Airport on Wednesday, August 25, continuing their journey from Boundary Bay, B.C. to Hudson Bay at Churchill, Manitoba to raise awareness and funding for charity organization Hope Air. (Photo: Lacie Nairn / The Drumheller Mail)

Pilots from the fourth annual charity expedition Give Hope Wings made a stop at the Drumheller Municipal Airport, the first of eight stops in Western Canada, on Monday, August 23; the expedition continued on their way from Boundary Bay, B.C. to Hudson Bay in Churchill, Manitoba on Wednesday, August 25.

The annual expedition helps raise awareness and aims to raise $400,000 in funding to support the charity Hope Air, which has provided flights and accommodations, at no cost, to Canadians with financial need who require medical care far from home since 1986.

Dave McElroy, President of the Kelowna Flying Club, is the chief pilot for the 2021 flight. He has previously flown the Give Hope Wings expedition in 2018 and 2019, raising over $750,000 for Hope Air. He has more than 4,200 hours of flight time and has flown more than 30 aircraft across the world.

Calgary-based pilot and specialist physician Dr. Magnus Murphy is making the more than 5,500 kilometre, or 3,000 nautical mile, journey with Give Hope Wings for the first time. As a specialist physician, Dr. Murphy has seen the value of Hope Air first hand as he receives patient referrals from across the province, and says he has seen patients from as near as Drumheller, to as far as north of Edmonton.

“If it’s only once, it’s not so bad, but when you have to come back for multiple treatments, it can be difficult,” Dr. Murphy tells the Mail.

He says the Drumheller Municipal Airport has grown in popularity recently among pilots, and attributes its growth to the involvement of the community, mayor and council, as well as the hard work and dedication put in by airport managers Patrick and Catherine Bonneville.

The Give Hope Wings pilots enjoyed breakfast at the downtown plaza on Wednesday, August 25 before continuing their expedition to their next destination in Yorkton, Saskatchewan.