Sometimes, moment-ous events in aviation take place on the ground, far from any airfield or manufacturing facility. Before anyone can fly – safely – they need to understand the rules . . . and someone must out of necessity write those rules. 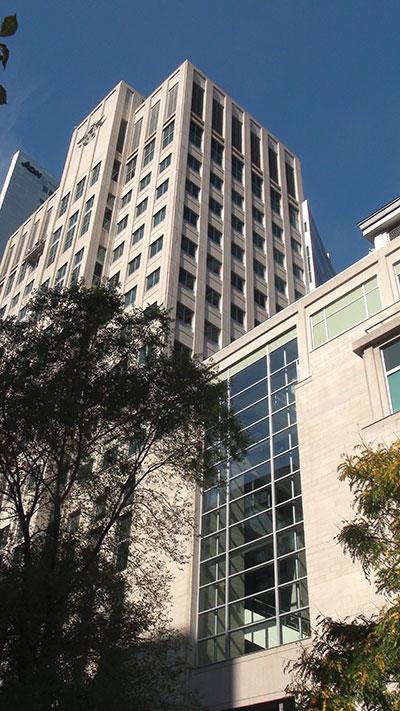 The worldwide air transport industry was born 95 years ago in 1919 in the aftermath of World War I, but it would take a quarter-century for the industry to converge on Montreal as the centre of the fledgling industry.

Though there had been efforts to organize commercial aviation co-operation in prior years, the global conflict had interrupted such notions. But in March 1919, a special Aeronautical Commission was established under the auspices of the Paris Peace Conference (Congrès de la Paix) at Versailles. Represented were Belgium, Brazil, the British Empire, Cuba, France, Greece, Italy, Japan, Portugal, Romania, the Kingdom of the Serbs, Croats and Slovenes, and the United States. The Commission agreed to a set of basic principles and air navigation laws, similar to the structure which would become the International Civil Aviation Organization (ICAO). The “Convention Relating to the Regulation of Aerial Navigation” – consisting of 43 articles that dealt with technical, operational, and organizational aspects of civil aviation – was signed by 27 nations on October 13, 1919.

One of the driving forces behind the Peace Conference aviation initiative and subsequently the first and only Secretary General of ICAN was Albert Jean François Roper, air expert at the French Cabinet of the Undersecretary of State for Aeronautics. Dr. Roper (he had a Doctor of Law degree) enlisted in the infantry at the beginning of WWI but later transferred to the Flying Corps where he eventually commanded a fighter squadron. He was shot down in May 1918 and left for dead, but obviously recovered from his injuries. Dr. Roper was awarded five citations and the Cross of the Chevalier of the Legion of Honour.

Over There
Canada had been amply and ably represented in WWI air battles, although the country had no planes of its own. More than 23,000 Canadians flew with British air services such as the Royal Flying Corps and the Royal Naval Air Service, 180 of them earning the designation of “ace” for five or more aerial victories, including E. R. Grange (Canada’s first ace) and other notables such as Billy Bishop, William George Barker, and Alan Arnett McLeod, each of whom received the Victoria Cross.

The Canadian government at the time reportedly demonstrated little interest in aviation, making no attempt to fund aircraft, airfields, or flight training. Ironically, a small Curtiss Aeroplane and Motor Company factory set up in Toronto to manufacture JN-4 aircraft (taken over by the government and operated as Victory Aircraft) produced nearly 3,000 of the trainer aircraft – but for export only to the U.S. and Spain primarily. Aircraft construction stopped at the end of the war. The Royal Canadian Air Force (RCAF), finally established in 1918, was disbanded shortly after war’s end, then reconstituted in 1920.

The year 1919 was nonetheless significant for the future of Canadian aviation. On June 14, British aviators John Alcock and Arthur Brown became the first to fly nonstop across the Atlantic, taking off from St. John’s, N.L., in their Vickers Vimy, landing about 16 hours later in Clifden, Ireland. Ernest Hoy was the first to fly over the Canadian Rockies, from Vancouver to Calgary, in a Curtiss JN-4 Jenny. The Canadian Pacific Railway petitioned to start air service in 1919 (though they did not immediately get involved in aviation). And the Aeronautics Act of 1919 established Federal control over aviation with legislative authority for air regulations.

Also significant in 1919, six European airlines founded the International Air Traffic Association, forerunner of today’s International Air Transport Association (IATA). At the post-WWI international air navigation discussions, Canada was only a minor player, but managed to secure an amendment that would permit Canada and the U.S. to make their own agreements on cross-boundary air regulations.

Post-Paris Progress
Subsequent to the 1919 Paris conference, Dr. Roper and others, through a series of conférences aéronautiques internationals of national aeronautics administrators, obtained ratification of the aviation agreements from 14 States – the British Empire and its Dominions including Canada counting for fully half of those. ICAN was therefore officially constituted on 11 July 1922. The convention was ultimately ratified and in force for 33 states by 1940. At that time, there were approximately 50 sovereign states in the world.

The First International Conference of Private Air Law (Dr. Roper, Secretary General) convened in Paris in 1925 to undertake the painstaking work of coding air law. The conference created a special committee of experts, Comit International Technique d’Experts Juridiques Aériens (C.I.T.E.J.A.), in charge of the continuation of the work, which was eventually taken over by ICAO with the creation of its legal committee.

As the trajectory of World War II gradually began to favour the Allies, U.S. president Franklin Roosevelt and British prime minister Winston Churchill discussed an international organization to manage aspects of civil aviation. In August 1943, Canadian prime minister William Lyon Mackenzie King hosted Roosevelt, Churchill, and other leaders at the first Quebec Conference in August 1943 at the Chateau Frotenac, the symbol of Quebec City on the banks of the Saint Lawrence River.

Liberal Party leader Mackenzie King was the dominant figure in Canadian politics of the Depression/WWII era, PM for nearly 22 years (1921–26, 1926–30, 1935–48). Chicago University- and Harvard-educated King in 1935 created Canada’s Department of Transport, merging under C.D. Howe the former Department of Railways and Canals, Department of Marine and Fisheries, and the Civil Aviation Branch of National Defence.

From Chicago to Montreal
Discussions got more intense the next year in the wake of the Normandy landing. In September 1944, the U.S. invited more than 50 governments to a conference to be held beginning in November, at a city to be determined, to “make arrangements for the immediate establishment of provisional world air routes and services” and “to set up an interim council to collect, record, and study data concerning international aviation and to make recommendations for its improvement.”

Roosevelt asked Adolf Augustus Berle, Jr., one of his original “brain trust,” to head the U.S. delegation and to find a non-Washington site for the event. In October, the U.S. Department of State announced the selection of Chicago as the host city.

Boston-born Berle, who became the youngest graduate (21) at the time in the history of Harvard Law School, had been a member of the American delegation to the Paris Peace Conference. Best known for corporate law and author of The Modern Corporation, Berle argued for government regulation and “business statesmanship,” which advocated that corporations must fulfill responsibilities toward society in addition to their traditional responsibilities toward shareholders.

The historic Chicago Convention was attended by nearly 1,000 people: 185 official delegates; 156 advisers, experts and consultants; 45 secretaries; 105 clerks and stenographers; 306 members of the Conference secretariat; 158 press representatives. This was estimated to be the largest international conference held in the U.S. in those years.

They gathered at the Stevens Hotel (now the Chicago Hilton), facing Lake Michigan. Louis XVI-styled, elegant in the “Roaring 20s,” when it was built for US$30 million ($400 million in today’s value), the Stevens was regarded by some delegates as only second-rate in 1944. “It would take up to one hour a day waiting for elevators and perhaps half an hour a day waiting to complete telephone calls.” Rooms cost $4-7 per night for singles, $6-9 for double occupancy. (The Hilton’s rates now range up to $724 per night. Berle had anticipated a three-week meeting. The Conference lasted more than a month, 37 days. The most-welcome recreations were sleep, after sessions that sometimes lasted all night, or the bar.

The conference opened November 1, 1944, and concluded on December 7, drawing up a Convention on International Civil Aviation (known today as the Chicago Convention), the charter of a new body – the International Civil Aviation Organization (ICAO) – established to guide and develop international civil aviation. The drafts of 12 technical annexes covered the technical and operational aspects of international civil aviation, such as airworthiness of aircraft, air traffic control, telecommunications, etc., the implementation of which documents would make international flying safer and more reliable. (Today there are 19 annexes with more than 10,000 standards and recommended practices – SARPs – published in six languages.)

Berle declared: “As a result of the work of these and many other men, when we leave this conference we can say to our airmen throughout the world that they can go out and fly their craft in peaceful service.”

With war still raging in Europe, and eager to get work started on the aviation standards, Canada was the executive committee’s logical choice for the provisional ICAO, referred to as PICAO. The Canadian government selected Montreal for the interim PICAO’s interim headquarters. Montreal was the leading metropolis, the most “cosmopolitan’ city,” and Canada’s main hub for international civil air transport.

With the 26th signatory to the Interim Agreement on International Civil Aviation, exactly one year after D-Day, PICAO was officially born on June 6, 1945. C.D. Howe, by then Canada’s minister of reconstruction, noted it was “the first post-war organization of the United Nations to get under way.” The first session of PICAO was held August 15, the day Japan surrendered.

Dr. Warner was elected the first president of the council of PICAO. He would continue as president of the ICAO council until his retirement in 1957. Born in Pittsburgh but raised in Boston, Edward Pearson Warner studied mathematics at Harvard and graduated from the Massachusetts Institute of Technology (MIT) with a degree in mechanical engineering. He was a founding member of the U.S. Civil Aeronautics Board in 1938, predecessor to today’s Federal Aviation Administration (FAA).

In May 1946, PICAO hosted a plenary meeting in Montreal during which 400 international delegates selected Montreal as PICAO’s permanent headquarters. Less than a year later, on April 4, 1947, interim PICAO became the permanent ICAO. In October 1947, president Warner signed the protocol by which ICAO became a Specialized Agency of the United Nations.

Dr. David MacKenzie, professor in the department of history at Toronto’s Ryerson University, who wrote a history of ICAO that was published in 2010, told Wings that the organization’s most significant accomplishment, in his opinion, “has been its ability to limit the interference of politics in its actions and decisions. I know there are always political issues and implications in such organizations, but ICAO has, for the most part, consistently put aviation safety ahead of state/political interests. I would encourage ICAO to continue doing so in the future – we benefit from it every time we fly.”

Last year, Canada solidified its relationship with ICAO, signing an agreement to keep the aviation organization’s headquarters in Montreal for another 20 years. The renewal had been in some doubt when Qatar made overtures to have ICAO HQ moved to Doha, which would have required a vote of 60 per cent of member states.

Recognizing that ICAO generates more than $100 million annually to the local and national economy through more than 1,200 direct and indirect jobs, Ottawa lobbied more than 100 countries to maintain the status quo.

Prime Minister Stephen Harper called Montreal, “a sophisticated city that is a hub of the aerospace industry around the world. There is absolutely no reasonable case to move the centre out of Montreal.”