Careers in Aviation News Training
Inside Centennial’s School of Transportation

The new $72 million Centre for Aerospace and Aviation at Downsview Park combines innovation, hands-on learning and industry partnerships to develop a new generation of highly skilled technicians and managers 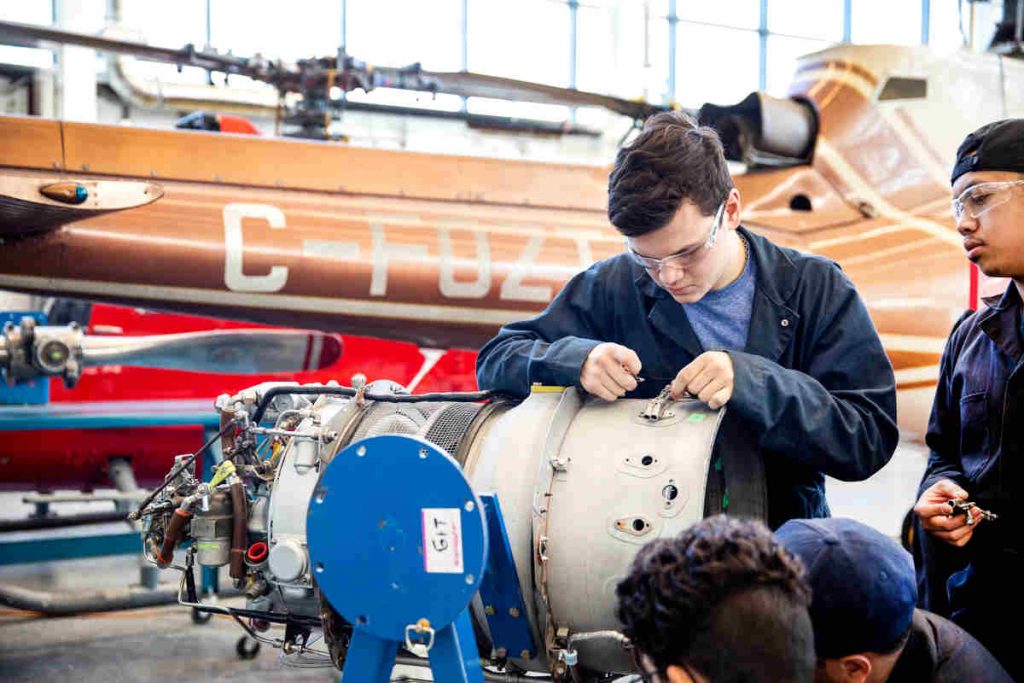 Centennial College’s School of Transportation is flying high. Since the mid-1970s, graduates of its Aviation Technician, Aircraft Maintenance and Avionics Maintenance programs have been in hot demand across Canada and around the world. At a time when the requirement for qualified technicians has never been stronger, Centennial is raising the bar with a new $72 million advanced education and training centre situated in the heartland of Canada’s rich aviation heritage.

Centennial’s new 12,700-square-metre Centre for Aerospace and Aviation at Toronto’s Downsview Park involved rebuilding the historic de Havilland Canada plant to include modern classrooms, laboratories, workshops and two hangars housing an expanded fleet of airplanes and helicopters for hands-on training. The campus enables the college to increase its capacity to over 1,000 students who are preparing for exciting careers in aviation and aerospace.

This past September, Centennial took in the first cohorts for two brand-new, three-year, advanced diploma programs. One of the programs is focused on Aircraft Maintenance and Management and the other on Avionics Maintenance and Management. They build upon the existing, two-year Aviation Technician programs and add a variety of complementary skillsets that include technical writing, quality assurance, maintenance planning and supervisory skills. In addition to these broader skillsets, the two programs are also accredited by Transport Canada for Aviation Maintenance Engineer “E” (Avionics) and “M” (Maintenance) licenses.

Bombardier named Centennial its trainer of choice in the manufacturing and maintenance of its aerospace products. In April 2019, the Montréal transportation giant donated a CRJ200 regional jet to the college’s extensive fleet of modern-day aircraft, which includes a number of Cessna 172s, a Citation II business jet and Sikorsky S-76 helicopter, in addition to other aircraft, engines and avionics components. An Intel Falcon mapping drone was recently added to support growing demand for unmanned aerial vehicle (UAV) training.

The opportunity to work on modern-day aircraft and equipment, and new technology training aids such as fuel and hydraulics systems, and cockpit communications and navigation is what helps a provide a Centennial student with the skills to standout in a competitive market. “Hands-on is the best way to learn a skill,” says Jamie Milks, coordinator of the Aircraft Maintenance programs. “They get a greater feel for the training and a sense of what is needed. The light bulb comes on a lot faster.”

A student’s day is typically filled working in the new hangars on fixed- and rotary-wing aircraft, getting practical training on various systems and working in the lab where they participate in computer-based learning. Students can expect to design complex aircraft parts on state-of-the-art computers and simulators. New laboratories will also enable the school to boost its presence in value-added research.

The school’s experienced instructors walk students through industry-standard techniques as they work on components such as airframes, engines, electrical and hydraulic systems, propellers, avionics equipment and aircraft instruments. Classroom instruction also includes essential theory and base knowledge as a key to better employment opportunities.

The Aviation Technician – Aircraft Maintenance program provides students with an understanding of aircraft maintenance in areas such as general, commercial and private aviation. The program equips students for a number of career opportunities, including manufacturing (Canada is one of the world’s largest manufacturers of aircraft and components, including engines), the airline industry, corporate and general aviation, flight training and the military.

The Aviation Technician – Avionics Maintenance program provides students with an understanding of complex electronic and electrical systems related to the navigation, guidance, communications, instrumentation and flight controls of modern aircraft. Graduates are equipped with skills to install, inspect and troubleshoot sophisticated equipment across a diverse range of fleets as they become more digitally advanced.

Experiential learning for Centennial students is an area of significant focus. For Aviation Technician students, Centennial has a partnership with Air Canada and the Canadian Council for Aviation and Aerospace on a Work Integrated Learning Program. This unique program provides approximately 30 students with 15 months of paid work experience in one of Air Canada’s maintenance operations after their second semester of full-time study. During the work placement, the students gain valuable experience on-the-job under the mentorship of fully qualified Air Canada technicians. At the end of the 15-month placement, students return to Centennial to complete the final year of their diploma program. Centennial also works in partnership with Air Georgian, Jazz, Hope Aero, Bombardier and industry organizations to provide eligible students with the opportunity to take part in work integrated learning and job shadowing.

The introduction of management courses to the basic two-year Aircraft Maintenance and Avionics Maintenance program is a welcome option for students who are plotting a career that extends beyond the hangar floor. “These are new three-year programs that add a management component to the existing programs and offer the fundamentals of management for positions such as crew chief or director of maintenance,” Milks says.

Centennial operates in lockstep with Canadian industry and its new Downsview Campus Centre for Aerospace and Aviation ensures the college remains an industry leader in providing future generations of aerospace professionals. The campus anchors an aerospace hub that will attract new investment and propel innovation. Centennial is a lead partner in the Downsview Aerospace Innovation and Research (DAIR) consortium, a cluster of industry heavy-hitters including Bombardier, Pratt & Whitney Canada, Honeywell, Siemens, Safran Landing Systems and Canadensys Aerospace, offering added training initiatives and job opportunities within the aerospace sector.

“The aviation and aerospace sectors are a constantly growing industry that is always providing different opportunities and challenges,” Milks says. “It is always on the lookout for highly skilled employees, and they are always coming to us.”