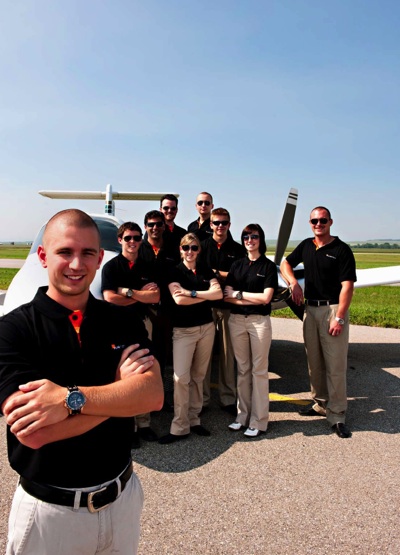 It is intended that the winner will be acknowledged and presented at the Annual General Meeting of the Air Transport Association of Canada in Vancouver in November.

The holder of the runner-up position is Cameron MacLean who represents the British Columbia Region and is currently flying out of Coastal Pacific Aviation Ltd. Abbotsford B.C. Our runner-up last year was also from Coastal Pacific so that is quite an achievement for that flight training unit.

The winner of the competition receives a bronze medallion depicting the Webster Trophy, two tickets anywhere on the Air Canada system, a top-of-the-line HME 460 Series head-set from Sennheiser (Canada), a professional development day with the Canadian Armed Forces elite aerobatic team the Snowbirds, a cheque this year for $1,000 from the Air Canada Pilot’s Association, a framed print of John C. Webster in his Curtiss Rambler signed by the renowned Canadian artist Robert Bradford, a Certificate of Congratulations Award from the Air Transport Association of Canada and an $1,800 X-Wind watch from Hamilton Watches. James Pouget’s name will now be placed on the pedestal of the Webster Trophy, which is on permanent display at the Canada Aviation Museum.

The runner-up of the competition received a plaque depicting his receipt of the Eunice Carter Memorial Award, a HMEC 110 series head-set from Sennheiser, a personalized professional log book from Aviation World (Toronto) and a framed print of John C. Webster in his Curtiss Rambler signed by Robert Bradford and a $1,100 Khaki Pilot watch from Hamilton Watches. Cameron MacLean’s name will now be attached to the base of the Eunice Carter Memorial Award, which is also on display at the Canada Aviation Museum.

All remaining finalists received beautiful plaques depicting their participation in the competition and $1,100 Khaki Pilot watches from Hamilton Watches. Every finalist also received a one year personalized membership presented by Kevin Psutka on behalf of the Canadian Owners and Pilots Association. All competitors were also presented with personalized lithographs of the Snowbirds in flight, an Online Single-Pilot Resource Management programme module and a one year subscription to WINGS magazine.

Air Canada Flight Operations sponsors the Webster Memorial Trophy Competition and assures that operational costs for the running of the competition along with the travel, accommodations and banquet costs of the finalists are entirely covered.

The Airline Pilots Association provided a cheque of $5,000 to cover the cost for each of the finalist’s two flight tests required during the competition, along with an additional night of accommodation for those who had to arrive early in order to take familiarization flights.

Aviation World also supplied all the VNCs required for the competition.

Calgary Flying Club was the 2010 host and was tremendous in every way throughout Webster Week. The Flight Centre donated the familiarization flights for all of the finalist’s who required one. Scott Wilcox, Manager and Pierre vanden Brink CFI, along with the entire staff is to be complimented highly, but especially Spencer Howard Chief Dispatcher who offered so much of his time and effort prior to and during the entire event. Spencer organized a Meet and Greet for all of the Webster finalists, judges and guests for Wednesday evening, was on standby to transport us whenever required and organized and monitored every facet of Calgary Flying Club’s involvement all week long.

As part of the entertainment this year and through the involvement of Westjet Airlines, all our finalists had a tremendous evening flying two B737NG full-motion, full-visual simulators all Thursday evening. A special thank you to Capt. Scott Wilson, Director Flight Operations and Capt. Karl Lingwood for showing our finalists and some of our alumni such a wonderful evening of sim flying including the opportunity to sit in the actual cockpit of one of their B737s

It is impossible to successfully organize and complete a competition of this magnitude without the willing and enthusiastic support of many people from within the aviation community. Each one is important for without the assistance of any one of those listed below, the competition would have lost something valuable. On behalf of the Webster
National Administrator, Amy Foy and all of the Webster Teams, Arlo Speer, Brian Shury, Kevin Psutka , Wayne Foy and Tim Mell, we wish to sincerely thank the following companies, organizations and people for their participation in the 2009 Webster programme:

And this year a special thank you to the Delta Bow Valley, especially Franciso Alves Sales Manager, James Tingley – General Manager, Kimberley Magarvey – Conference Service Manager and the entire staff who contributed to making every aspect of Webster Week the success that it was. The Delta Bow Valley Hotel of Calgary Alberta was absolutely phenomenal.