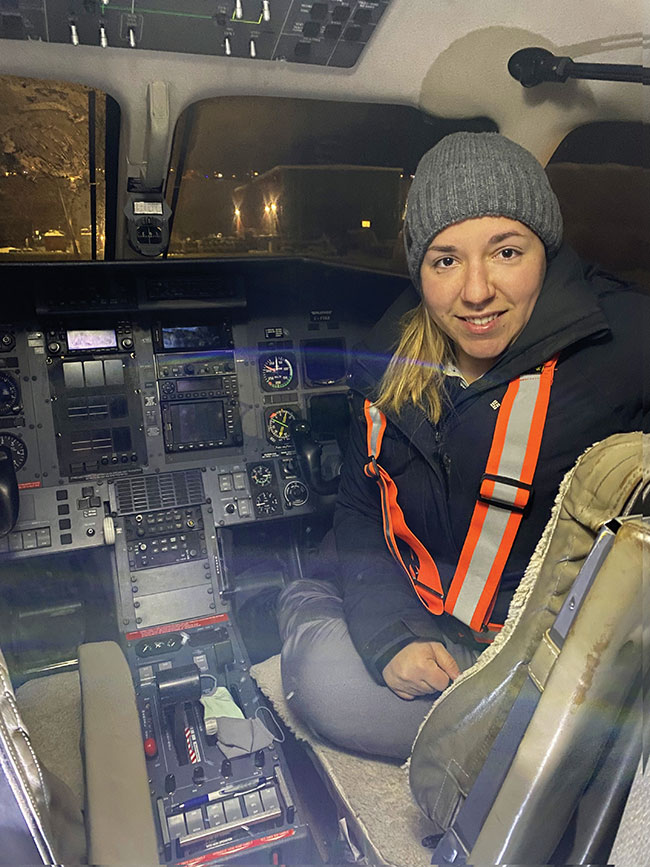 Kelly Lamontagne is a pilot. This statement seems so simple and straightforward, but it is a declaration laced with inspiration for an entire community who needs to look no further for an example of what a dream – driven by passion and hard work – can achieve.

At the young age of six months old, Lamontagne’s family moved to Iqaluit and the beautiful, vast tundra of Nunavut settled deep in her soul. Even after moving to Quebec at age 11, where she finish college, Lamontagne knew one day she would return to the north and make it her permanent home.

“It felt like I flew back home after a long vacation,” Lamontagne says, upon her returned to Iqaluit in 2014, embracing once again the nature, friends and community of the territory’s capital. This is her home, where she is part of something important. “When I moved back up to Iqaluit in 2014, my first job was at the high school and I met so many awesome students that I still chat with these days. I love following them as they grow into young adults with dreams and aspirations; and I hope they are inspired by my path in becoming a pilot.”

Five years ago, Lamontagne was living in Iqaluit uncertain of what to do for a career. She was helping coach the Iqaluit Senior Women’s Hockey Team. When the team was invited to Kangiqsujuaq to play in a tournament they chartered  an airplane over to the small neighbouring  community in Nunavik. She could not have realized how that flight would change the trajectory of her life.

Lamontagne was offered to sit in the flight deck of the Pilatus PC-12. She was taken back seeing that the First Officer was a young woman, who opened up a world of possibility and inspired a dream. On that flight, Lamontagne made a promise to herself to one day fly a PC-12 over the beautiful tundra where she grew up.

Becoming a pilot is a long, difficult journey for most, but it was all the more arduous for Lamontagne because of her location in Canada’s north. There are no flight schools offered in her community and the closest one would take her a long way away from her friends and the community she loved. She simply did not want to leave a second time. Undeterred, Lamontagne went to work researching and planning how she could make her new dream come true.

Before she knew it, she once again set off to Quebec as a first step, where she obtained her Private Pilot’s License, muti-IFR and Commercial Licence at Lachute Aviation. She picked this flying school because it offered a modular base flight training program, allowing her to make a living as she trained to become a pilot.

Training is expensive and Lamontagne needed money to help pay her living expenses, as well as pay for the training. Perhaps it was fate that led her to find a job working as a ramp agent for Nolinor Aviation in Mirabel, Quebec. A job that made her realize she did not just love flying, she fell in love with aviation.

Nolinor is based at the Mirabel Airport, which is one of Canada’s most important aviation hubs, where Lamontagne did everything related to ground ops, fuelling, grooming, towing, luggage, passenger escorts, catering, and cargo… lots of cargo! This job also included travelling to Yellowknife, the capital city of Canada’s Northwest Territories, for a three-week cargo – an experience she will never forget.

Although for a while it looked like Kelly would stay at Nolinor for many years and ‘climb her way up,’ never once did she give up on her dream to return to Nunavut with her wings.

Luckily for Lamontagne, Nolinor’s Chief Pilot believes in helping his staff grow and spread their wings. He made a phone call on her behalf to see if their partner company Panorama Aviation was hiring. Within three months she received a call from the Chief Pilot at Panorama, and Lamontagne was given a very unique interview – jumping into one of their airplanes, instead of sitting in front of a desk answering questions. “Best way to do an interview,” Lamontagne recalls. “Anyone can prepare answers in an interview, but this shows how are you going to fly and act in front of passengers – Best interview I ever had!”

Obviously, Lamontagne aced it because three weeks later she was offered the job. She was beyond thrilled: “On the first day of flying in my new role, I landed at Toronto Pearson Airport. It was exhilarating.” Even more important than having the opportunity to land at Pearson was that this job would help her find her way back home in Iqaluit.

Today, Lamontagne is living the dream she set out to fulfill five years ago. She is now a First Officer for an air taxi charter operation in Iqaluit. In this role, her past ramp experience has made her a well-rounded employee. While the Captain does the flight planning, Lamontagne, as the First Officer, will be given information on the next flight and get to work towing the airplane out; and even fueling the airplane when it’s at the company’s home base in St-Hubert, on the south shore of Montreal. “I smell like fuel all the time,” she laughs, “it’s my favorite perfume.” Lamontagne also makes sure the airplane is configured properly for cargo or passengers. She loves having the opportunity to still work the airplane, not just fly it.

“After all the hard work is done, I get to sit down in front of the airplane, strap in, and take off into the sky,” she says. “I’m doing exactly what I set out to do – fly a PC-12 in Iqaluit, my arctic home. Bucket list item – complete.”

Lamontagne also understands what it means to serve as a role model in her community. “It’s important to show youth in Iqaluit that when you are passionate about something, you work hard, you can make your dream come true,” she says. “People in Iqaluit know if they want to do specific post-secondary programs that are not available in Nunavut after high school, they have to go away. And for many young people, they think it can be impossible. I want to show them that it’s possible. Why not encourage them to fly?” Lamontagne says. “The people in our community love airplanes… for us, they represent connection, life, safety and dreams.”

It’s very true. The airplanes in Iqaluit bring in food, allow people to access, education, medical treatment and surgeries, and connect families to their home communities. “If we don’t have airplanes, the entire community would have to revert to hunting for their food and online shopping would be impossible” she states. “Airplanes represent an entire world of options that would otherwise not be assessable to us.”

Now that Lamontagne has accomplished her dream of flying a PC-12 in the Arctic, are new aspirations starting to stir? “Wouldn’t it be wonderful if I could participate in starting a flying school right here in Iqaluit to help others have an easier time to access training for the youth of the north? It might be the most northern flight school in Canada and it would offer something that is not normally accessible for them to take a part in something that is so necessary up in the north.”

Dreams are realized through passion and hard work, staples of aviation. “My parents always told me if I work hard, life will reward me and I guess that’s the message I want to spread,” she says. “Go after your dreams – it’s possible.”

Kendra Kincade is founder and executive director of Elevate Aviation.