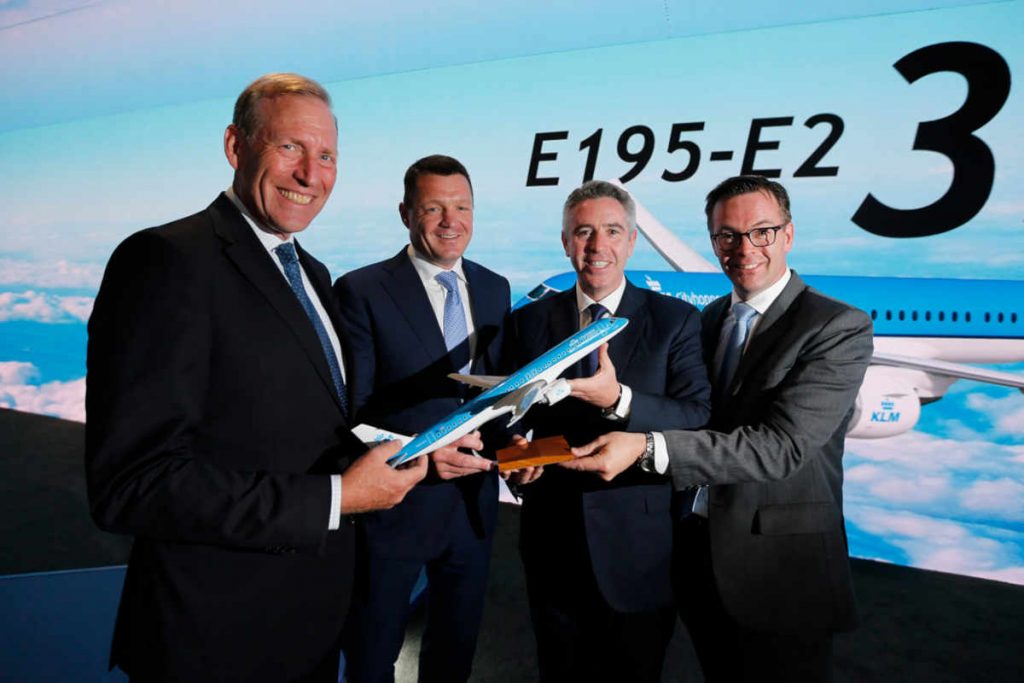 Embraer and KLM Cityhopper in early November signed a firm order for 21 E195-E2 aircraft, plus 14 purchase rights. The firm order of 21 airplanes represents KLM’s commitment to six additional such aircraft relative to its original order announced earlier this year at the Paris Airshow.

With all purchase rights exercised the deal would have a value of approximately US$2.5 billion. The 21 firm positions will be acquired via operating lease from Embraer lessor partners Aircastle and ICBC Aviation Leasing, providing 11 and 10 E195-E2s, respectively.

Embraer states its E2 generation aircraft deliver 30 per cent lower emissions when compared to KLM’s current E190s, while also providing an additional 32 seats. With deliveries set to begin in the first quarter of 2021, KLM plans to configure the E195-E2 aircraft with 132 seats.

“For KLM this aircraft is a significant part of our commitment to improving our environmental impact,” said Pieter Elbers, president and CEO, KLM. “Not only is the E195-E2 the most fuel efficient lowest emission aircraft in its class, it is also the quietest by a considerable margin – a huge benefit for both our communities and our passengers.”

Embraer’s commercial aircraft operation, focusing on places with up to 150 seats, has more than 100 customers across the world. For the E-Jets program alone, with aircraft ranging in passenger size from 70 to 150 seats, Embraer has logged more than 1,800 orders and 1,500 aircraft have been delivered. Today, E-Jets are flying in the fleets of 80 customers in 50 countries.