After years of being a major, reliable revenue driver in the business aviation industry, sales of large business jets are beginning to show signs of fatigue. “The market for these intercontinental aircraft with seating for 15-plus and price tags in the $35-75 million range were barely fazed by the 2009 worldwide financial crisis,” notes aviation analyst Brian Foley. “Conversely, sales of smaller, more modest jets declined by two-thirds forcing planemakers in that segment to halve staffing and in one case fold. The split personality between big and small is showing objective evidence of change, and is in fact reversing.” 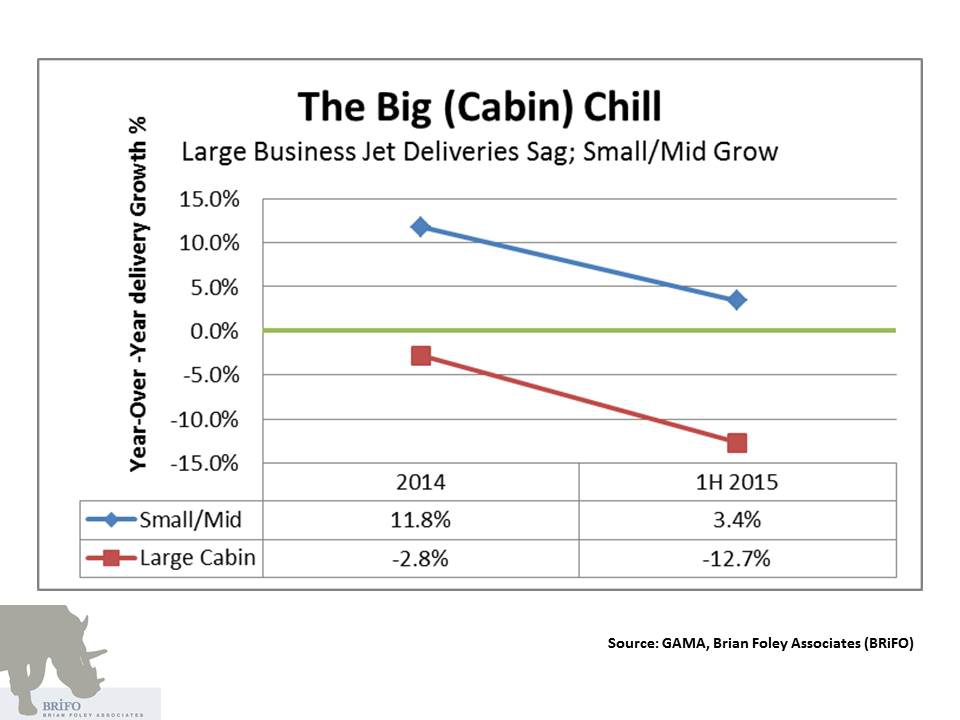 Foley delved into recent jet delivery figures published by the General Aviation Manufacturers Association (GAMA) and noted that while overall deliveries in 2014 were up 6.5% over 2013, small and medium jets drove that growth and were up 11.8% whereas big cabin jets sank 2.8%. The trend is even more pronounced when comparing the first half of 2015 with 2014 which indicates 3.4% more small/medium jets deliveries but 12.7% fewer big cabin jets.

There’s other anecdotal evidence pointing to a slowdown in the large segment, with manufacturers who participate at the top end either directly or indirectly telegraphing their declining situation. Bombardier slowed production of its large Global 5000 and 6000 business jets idling 1750 employees, and then delayed their new (even bigger) Global 7000 and 8000 jets by 2 years. Dassault reports just 5 net Falcon Jet sales in the first half due to weaker global demand and a large fleet order cancellation. “Gulfstream rarely shows its hand, but by recently accelerating deliveries of two new, large G450 jets to a fleet customer suggests to me that they’re managing their order book by making unsold delivery positions available sooner to waiting customers.”

Foley attributes the slowdown in the upper echelons to a combination of factors, including an economic decline in emerging markets that geographically have a need for ultra-long range jets, a strengthening US Dollar making them cost more overseas and declining commodity prices. “Oil-related companies and regions like their big-cabin jets, but that sector now sees oil prices that are less than half what they were a year ago.”

While Foley believes total 2015 business jet unit deliveries will match or exceed 2014 levels, he expects overall delivery values to fall due to a change in mix that has fewer high-value big cabin jets and more of the less-expensive smaller ones. “There’s now clear evidence of change, but the industry’s muscle memory of big jets always outperforming small will be tough to overcome.”