Features Operations
Lawrence of Arabia is on the wing 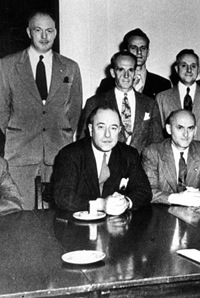 June 24, 2009 – When the Royal Air Force (RAF) courier interrupted young Harry’s crap game in London’s Savoy Hotel, the Canadian flier had little reason to believe he would be alive in a week’s time, let alone finish his game.

When the Royal Air Force (RAF) courier interrupted young Harry’s crap
game in London’s Savoy Hotel, the Canadian flier had little reason to
believe he would be alive in a week’s time, let alone finish his game.
Still, Flight Lieut. Harry Yates loved a challenge. Besides, the secret
mission offered an opportunity to settle a personal score and, since he
had only been given six months to live, Harry felt he had little to
lose.

THE MISSION
On June 20, 1919, Harry Yates was in London celebrating his recent
London-Paris multiengine flight record when the courier knocked at his
door. Three hours later, he was flying his Handley Page (HP) bomber to
Lympne near the coast. At dawn the next day, he met a British Foreign
Office agent and was airborne minutes later on a five thousand
kilometre flight to Cairo. The Foreign Office official was Harry St.
John Philby, father of the infamous Cold War era British/Soviet double
agent, Kim Philby. Philby was being dispatched to Cairo to quell Arab
unrest caused by British betrayal of promises of self-determination
made by Lawrence of Arabia in exchange for their resistance against the
Ottoman Turks.1

Harry was to leapfrog his way across Europe and the Mediterranean,
arriving in Cairo in the shortest possible time. The previous
London-Cairo record was 15 1/2days held by an Englishman, RAF Maj.
A.S.C. MacLaren. Air Ministry ground support was promised along the
way.

Harry had very personal reasons to attempt the record. Yates had been
ordered to train MacLaren to fly HPs but had never been told the nature
of the mission which, doubtless, he would have felt perfectly qualified
to do himself. Second, he began to suffer chronic stomach pain while
training in France. Eventually it became so severe that half his
stomach was removed, and the surgeon gave him just six months to live.
Harry was effectively operating under a death sentence.

GOING FOR THE RECORD
Guy Simser, a Kanata, Ontario, aviation writer, used Harry’s journal
entries to reconstruct events along each of the 10 stages of the flight
plan. Promised Air Ministry ground support consistently failed to show,
leaving Harry and crew to fuel and maintain the giant bomber themselves
and costing them valuable time. His obstacles illustrate the
rudimentary nature of flight in those days. The landing field in
Marseilles was strewn with boulders which blew out two tires. During a
quick lunch break, their map was stolen. Writes Simser, “With no
direction beams, radar or radio in 1919, maps were essential.
Improvising, they borrowed a local encyclopaedia and traced maps of
southern Europe and the north coast of Africa.”2

Particularly hazardous was the flight taking them over the mountains
across Italy’s boot. For Canadians used to flying over the relatively
sedate landscape of England and northern Europe, the sudden appearance
of mountain peaks and cliff walls was alarming. Harry called it, “the
roughest trip I have had yet,” but would have to revise his statement
the next day. The Greek leg of the route offered no possible landing
sites so when a fuel pump quit with only 15 minutes of fuel, the only
potential landing spot was a partially dry, rocky river bed. The
landing was so dangerous that Harry and his co-pilot shook hands before
making the attempt. Philby, cloistered in the rear cockpit, could only
pray.

Harry successfully landed the giant bomber in the narrow fissure
suffering only a broken tail skid and a punctured tire. Excited locals
cleared a pathway of boulders for take off and helped lift the rear of
the six-ton plane on their shoulders to make repairs.

The
most eventful portion of the journey, however, turned out to be on
arrival in Suda Bay, Crete. Nearing Crete, Harry suspected a cracked
propeller when the bomber began to shimmy alarmingly. The landing strip
was located in an extinct volcano and, when the exhausted pilot came in
too low, Yates very nearly tore a wing off the plane. Examination
confirmed the propeller was unusable, and a new one essential, or the
record attempt was doomed. Serendipity intervened when Harry was able
to cannibalize another stranded RAF bomber of its serviceable
propeller. In the meantime, Philby came across Col. T.E. Lawrence, the
legendary Lawrence of Arabia, who had also become stranded in the
extinct volcano en route to Cairo. Lawrence had slipped away from the
Paris Peace Conference, ostensibly making his way to Cairo to retrieve
his notebooks, which he would later use to write Seven Pillars of
Wisdom, an account of his First World War exploits. With the Foreign
Office secret agent, and now the iconic Lawrence of Arabia, in tow,
Harry had more incentive than ever to deliver his passengers safely and
in record time.

Flying to to Lybia the next day, the crippled HP’s fuel pump failed.
With no life jackets or lifeboats on board, ditching in the
Mediterranean meant certain death but by noon they were over the vast
desert of North Africa. After refuelling, with both crew and aircraft
at breaking point, they pushed on to Cairo. On arrival, they couldn’t
find the airport. The airport was finally spotted by Lawrence who had
bellied out onto the wing to get a better view.

When the tattered HP’s wheels touched down in Cairo on the night of
June 26, Harry had broken the 15 1⁄2-day London-Cairo flying record by
10 1⁄2 days. His new record was five thousand kilometres in 36 hours
flying time, over five days, and would have been better if promised
ground support had materialized.

HARRY YATES, DC
“In the ensuing years”, writes Simser, “Yates’s stomach responded
poorly to medical treatment. Although he outlived, by far, his military
doctor’s prognosis of six months, he found no remedy until he turned to
chiropractic. Indebted, he became a chiropractor.”3
Yates became a major figure in the chiropractic community, serving in
various capacities, including Canadian Chiropractic Association
president and parliamentary representative, president of the Ontario
Chiropractic Association, and member of the Canadian Memorial
Chiropractic College board of governors.4,5 He maintained a lifelong interest in flying, however, and died en route to the Warbirds’ 50th anniversary reunion in 1968. •


On descending through cloud cover over Pisa later that day, they
couldn’t find the airport and so, they used the Leaning Tower as a
landmark.

Steve
Zoltai is the collections development librarian and archivist for CMCC
and was previously the Assistant Executive Director of the Health
Sciences Information Consortium of Toronto. He has worked for several
public and private libraries and with the University of Toronto
Archives. Steve comes by his interest in things historical honestly –
he worked as a field archeologist for the Province of Manitoba. He can
be contacted at
\n szoltai@cmcc.ca.

This e-mail address is being protected from spam bots, you need JavaScript enabled to view it