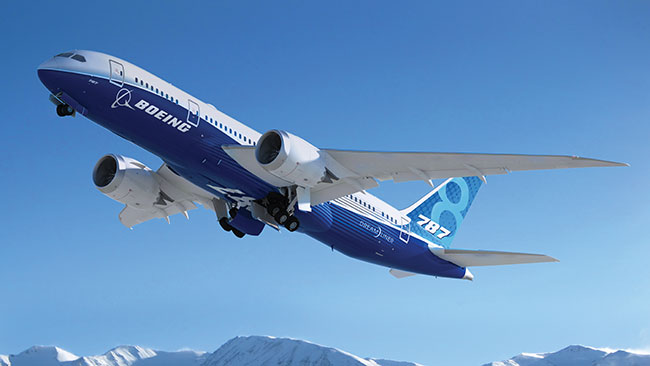 The Boeing Company expects to consolidate production of 787 jets at its facility in North Charleston, South Carolina, starting in mid-2021. PHOTO: Boeing

The Boeing Company in mid-October announced plans to consolidate production of 787 jets at its facility in North Charleston, South Carolina, starting in mid-2021. The company explains this decision was made to preserve liquidity and reposition certain lines of business given the current global business environment. Just days earlier, the company released its annual global forecasts for the commercial aviation, defence and aerospace sectors, which accounts for the ongoing impact of the COVID-19 pandemic on near-, medium- and long-term market conditions.

The 2020 Boeing Market Outlook (BMO) projects that the commercial aviation and services markets will continue to face significant challenges due to the pandemic, while global defense and government services markets remain more stable. “While this year has been unprecedented in terms of its disruption to our industry, we believe that aerospace and defense will overcome these near-term challenges, return to stability and emerge with strength,” said Marc Allen, chief strategy officer, Boeing.

The BMO forecasts a total market value of US$8.5 trillion over the next decade, including demand for aerospace products and services. That forecast is down from US$8.7 trillion a year ago due to the impact of the COVID-19 pandemic. Boeing states airlines globally have begun to recover from a greater than 90 per cent decline in passenger traffic and revenue early this year, but a full recovery will take years.

The 2020 BMO includes projected demand for 18,350 commercial airplanes in the next decade – 11 per cent lower than the comparable 2019 forecast – valued at about US$2.9 trillion. In the longer term, the commercial fleet is forecast by Boeing to return to its growth trend, generating demand for more than 43,000 new airplanes in the 20-year forecast time period.

The BMO also projects a US$2.6 trillion market opportunity for defense and space during the next decade. This spending projection, explains Boeing, reflects the ongoing importance of military aircraft, autonomous systems, satellites, spacecraft and other products to national and international defense. This demand continues to be global in nature, explains Boeing, with 40 per cent of expenditures expected to originate outside of the United States.

Beyond the lower demand for near-term commercial services, the BMO forecasts a US$3 trillion market opportunity for commercial and government services through 2029, with digital solutions emerging as what Boeing describes as a critical enabler with customers focused on leaner operations to adjust to future market demand. Boeing notes life-cycle services and support will help customers scale their operations to meet efficiency and cost objectives aligned to market recovery trends.

Boeing also released its 2020 Commercial Market Outlook (CMO), an annual 20-year forecast addressing the market for commercial airplanes and services, projecting an increase in the share of deliveries replacing older passenger aircraft that are being retired in an accelerated replacement cycle, especially in the first decade.

According to its commercial forecast, Boeing notes, that over the next 20 years, passenger traffic growth is projected to increase by an average of four per cent per year; and the global commercial fleet is expected to reach 48,400 by 2039, up from 25,900 airplanes today. During this period, Boeing states Asia will continue to expand its share of the world’s fleet, accounting for nearly 40 per cent of the fleet compared to about 30 per cent today.

Boeing states single-aisle airplanes, such as the 737 MAX, will continue to be the largest market segment, with operators projected to need 32,270 new airplanes in the next 20 years. Single-aisle demand will recover sooner, according to Boeing, due to its key role in short-haul routes and domestic markets as well as passenger preference for point-to-point service.

In the widebody market, Boeing forecasts demand for 7,480 new passenger airplanes by 2039. The company explains the widebody demand will be affected by a slower recovery in long-haul markets, typical after air-travel shocks, as well as uncertainties from COVID-19’s impact on international travel.

Air cargo demand is expected to grow four per cent annually, according to Boeing, and generate further demand for 930 new widebody production freighters and 1,500 converted freighters over the forecast period.

A month after Boeing released its forecasts, CAE of Montreal followed suit with its own projections over the period of 2020 to 2029, as part of the CAE Pilot Demand Outlook. The report includes a short-term forecast for 27,000 new professional pilots starting in late 2021, as well as a global demand forecast for more than 260,000 new pilots over the next 10 years.

CAE states it analysis shows that the active pilot population is expected to return to 2019 levels in 2022, noting retirement and attrition are expected to continue to be a challenge for the civil aviation industry as air travel recovers. This is expected to drive an acute demand for pilots, resulting in an estimated short-term need for approximately 27,000 new professional pilots starting in late 2021.