Call me a cynic but I don’t use the word “wow” too often, especially when it comes to achievements in the aviation world that are supposed to impress me. 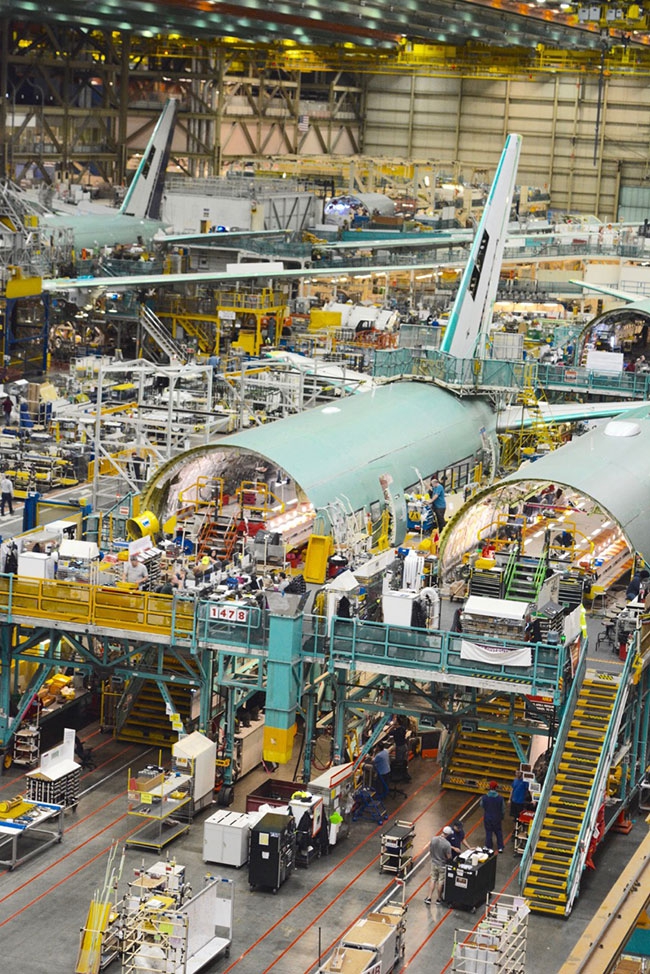 “If you’ve ever wondered if there’s an aerospace achievement out there that merits countless ‘wows’ here’s one that does.” Call me a cynic but I don’t use the word “wow” too often

I’ve encountered some pretty cool things in my tenure as editor of  Wings  magazine. In the last three months for example, I have been all over North America bearing witness to some great product launches, OEM facilities and more. I’ve even managed to make every young fighter pilot’s job that much more secure after my stint in a Boeing F/A-18 E/F Super Hornet simulator. Yes, I rid the world of a few critical “threats” – trees, rocks and other nasty intruders – in my time in the cockpit. Sorry Maverick and Goose; guess I didn’t feel the need for speed.

One experience that certainly hit the “wow” factor for me, however, was a recent tour of Boeing’s commercial airline manufacturing site in Everett, Wa., home of the production lines for the 747, 767, 777 and 787.

Standing there, gazing at the line of 777s in production, the highly-organized manufacturing processes at full, highly-efficient capacity, I couldn’t help but think what aviation pioneers Orville and Wilbur Wright might have thought had they had the opportunity to gaze down at the aircraft being produced.

Could they have even fathomed what impact their makeshift flying machine would have had when it soared to the skies on that magical December day in 1903? Could they have envisioned what ingenuity had germinated there and where the engineers at companies like Boeing were going to take it?

Let’s start with a few numbers. Boeing’s Everett facility is the largest manufacturing operation in the world by sheer volume at a remarkable 472 million cubic feet. Located on the northeast corner of Paine Field, Everett is essentially a small city with intricate “roadways” for the efficient movement of the more than 30,000 employees that work here. For those doing the math, that’s just a tad smaller than the entire population of two Canadian Territories and countless cities, towns and hamlets across Canada.

Employees here are blessed with all the creature comforts of a small community on site to make sure things run as productively as possible. Several cafés dot the premisis as does a bank (BECU branch), fitness centre, daycare, theatre and more. Everett even has its own fire department! A short jaunt away is The Boeing Store and the Future of Flight Aviation Centre, which runs a factory tour for aviation enthusiasts. There are even individual pathways that run throughout the facility for the more than 1,300 bikes and trikes employees can use to get around.

Boeing’s footprint in Canada is as impressive as the Everett site. For more than a century, Canada’s commercial, military and research and development opportunities have played a key role in the growth of the company. With more than 17,518 employees nationwide at several sites, Canada is Boeing’s second-largest international supplier with a 2015 company-wide spend of US $1.3 billion.

Canada’s largest airlines – Air Canada (AC) and WestJet – are flying a wide selection of Boeing products and more than a dozen other Canadian airliners operate some 270 aircraft. Daily, 620 commercial flights and 80,000 passengers fly on Boeing equipment, a number that will increase as both WestJet and AC update their fleets to increase their international footprints.

“We have had – and continue to have – a very strong relationship with Canada,” notes Roberto Valla, vice-president of global sales, Canada. “It’s a longstanding relationship that will most certainly grow on so many levels going forward.”

The numbers certainly don’t lie. Boeing’s presence in this country will continue to flourish in the months and years ahead – and, to me, that’s certainly a “wow” factor worth noting.