Fall in Canada brings with it significant alterations to the national landscape as the sultry days of summer are replaced by the frigid winds of change, prompting a new direction and preparation for the winter season ahead. 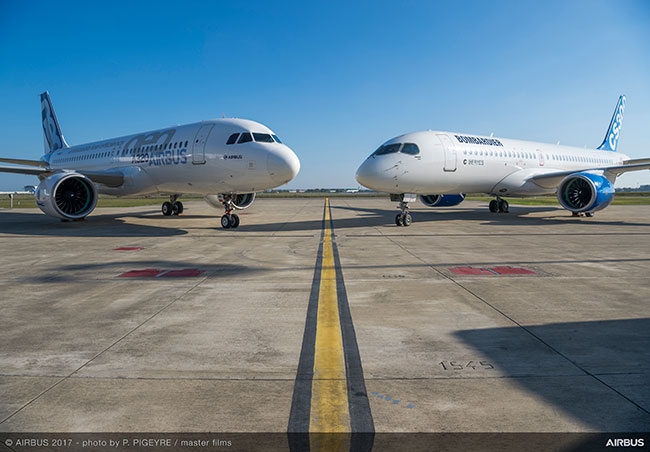 It is no surprise the C Series is attracting interest from all corners. Fall in Canada brings with it significant alterations to the national landscape

The Canadian commercial aviation and aerospace industries are also undergoing changes that promise to reshape the landscape in the months and years ahead.

As Wings went to press, Airbus and Bombardier sent shockwaves through the aerospace industry, announcing they were joining forces to manufacture the C Series – the CS100 and CS300 aircraft designed to make hay in the competitive single-aisle, medium-range airline class.

The new deal gives Airbus a 50.01 per cent stake in the C Series Aircraft Ltd. Partnership, while Bombardier retains 31 per cent and the Quebec Government’s investment agency holds 19 per cent.

Currently embroiled in a trade dispute with rival Boeing which saw the U.S. Commerce Department impose harsh duties on the company, the deal could mean Bombardier circumvents the duties being imposed on its C Series aircraft.

The deal also enables the C Series headquarters to remain in Montreal, though a second assembly line will be added at Airbus’s facility in Mobile, Ala., allowing for the sale of aircraft in the U.S.

The new pact also contains a clause that would enable Airbus to buy the program outright from Bombardier in 2025 for what is highlighted as “fair value” – a price to be determined. The C Series program is an important one for Canadian aerospace companies as some 238 suppliers contribute in some way to aircraft development.

“On the surface, Bombardier’s new proposed partnership with Airbus would help position the C Series for success by combining excellence in innovation with increased market access and an unrivalled global salesforce,” noted Navdeep Bains, minister of innovation, science and economic development. “The C Series is the benchmark for excellence in the narrow-body aircraft and a cutting-edge Canadian innovation. It is no surprise the C Series is attracting interest from all corners.”

While the C Series/Airbus deal stole headlines from an aerospace perspective, the potential influx of ultra-low-cost-carriers (ULCCs) into the Canadian commercial space will drastically alter the segment going forward.

As Wings correspondent David Carr notes in “Getting High on Low,” pg. 20, the race for ULCC service is heating up, as new offerings from WestJet (Swoop), Canada Jetlines, Flair Airlines (which picked up the pieces from NewLeaf Travel earlier this year), as well as Air Canada’s discount offering Rouge, converge on new markets. ULCCs will give Canadians more choices, lower fares and present a more competitive commercial environment. It also means potential revenue streams for regional airports, such as the Region of Waterloo International Airport (YKF). For more, see “Open For Business,” pg. 23.

As YKF’s  Chris Wood notes of the new initiatives his airport is implementing to grow its commercial footprint, “I think we are well on our way to seeing great things.”