In the classic children’s book, “The Little Engine That Could,” a long, stranded train of toys must be pulled over a mountain to reach its destination. After other powerful train engines refuse to make the trek, a spunky little blue engine steps up to the plate and gives it a go. Repeating the motto, “I think I can, I think I can,” the feisty blue engine successfully pulls the train over the mountain, much to the delight of its passengers. 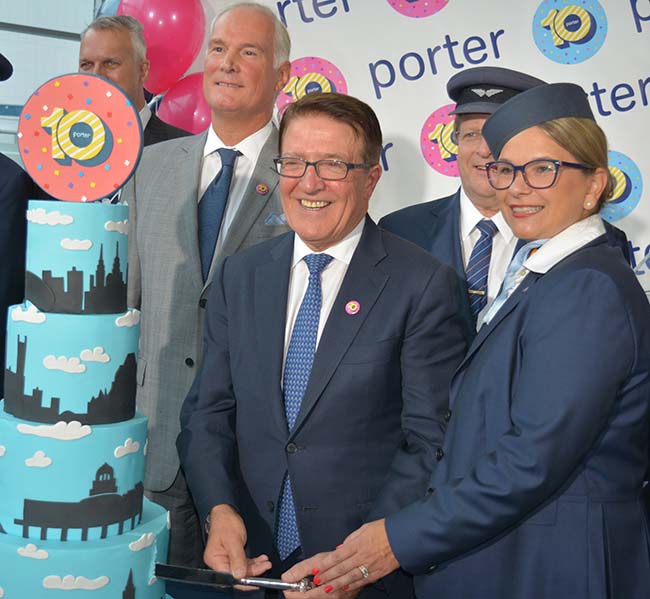 “The next 10 years are going to be equally exciting if not more so.” In the classic children’s book

It’s a tale that illustrates the importance of hard work, determination and an optimistic perspective. I would argue it also applies to another “little blue engine” in the Canadian aviation industry – the story of Porter Airlines, the reliable, efficient and highly successful commuter airline celebrating its 10th anniversary this year.

The brainchild of Porter president and CEO Robert Deluce, a successful airline executive whose family has more than 50 years in the aviation business, Porter kicked off operations on Oct. 23, 2006 with 10 daily return flights from Toronto’s Billy Bishop Toronto City Centre Airport to Ottawa International. Porter has since grown operations to 23 destinations (including seasonal routes) throughout North America.

It’s fleet of 26 quiet and reliable Bombardier Q400 aircraft have served more than 18 million passengers and Porter staff has grown from a handful of employees and two aircraft to more than 1,400 employees – an incredible achievement in an industry where airline startups – and subsequent successes – are rare indeed.

The Porter model of providing passengers with quick and hassle-free flights with efficient service harkens back to the philosophy instilled in the airline by Deluce at its inception. As the proud Porter leader told Wings at the vibrant 10th anniversary celebration at Billy Bishop in late October, the vision was always to restore pleasure and convenience to modern flight – a time when passengers looked forward to travelling and reaching their destinations sans excuses and hassles.

“Ten years went by very quickly and we are very pleased with where we are today and how we are positioned for the future,” Deluce said. “The next 10 years are going to be equally exciting if not more so. I think everyone at Porter is looking forward to that.”

Deluce has never been one to shy away from the “I think I can” philosophy and has looked to capitalize on any and all opportunities. It’s a philosophy that transcends setbacks, including political strife throughout the start-up process and last year’s announcement by the federal government to put the kibosh on future plans of expansion at Billy Bishop. Porter had a conditional offer of up to 30 Bombardier C Series jets that would have opened up new routes and destinations had the deal gone through. The airline soldiers on with its Q400s and its service is obviously making its mark with passengers: Porter continues to garner a number of top awards for service excellence in several industry publications.

So, what does the future hold for Porter and what excites the man who drives the “little blue engine” to ascend the mountain to success?

“What excites me is we are 10 years in and we have such a strong team,” Deluce said. “I’m excited about the fact that there are so many options for passengers, more flights, lower fares, definitely more people flying. You only have to look back a few years and remember that there were many one-way walk-up fares at about $1,000 or more in the marketplace. None of that exists today because there are alternatives and people recognize that Porter has been instrumental in bringing this to the marketplace. It makes one proud of what has been accomplished.”

“I think I can indeed.” Porter is certain to be making plenty of noise in the months in years ahead.