When Rudy Toering sat down with Wings last year for a comprehensive one-on-one conversation about the state of the Canadian business aviation industry, several things piqued my interest. 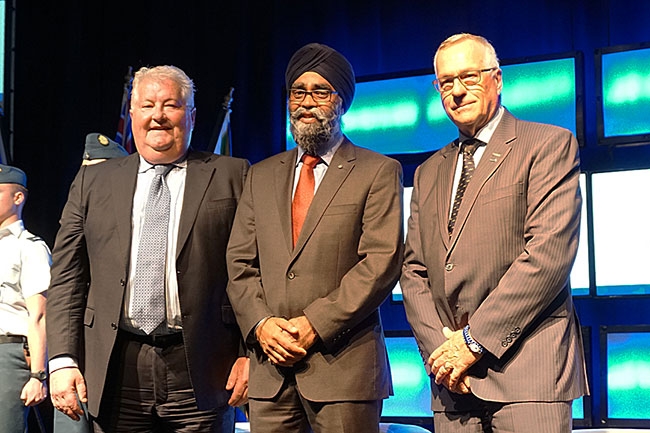 This helped us raise the stature of ADSE as one of the premier aerospace and defence events in Canada. When Rudy Toering sat down with Wings last year

Perhaps the most telling was the decision to bring the annual CBAA convention and exhibition to Abbotsford, B.C. and partner with the Aerospace Defence and Security Expo (ADSE) – and the popular Abbotsford International Air Show – to create one large mega conference. It made sense – an opportunity to bring two important industry associations together to showcase B.C.’s aerospace might, as well as the West Coast’s BizAv footprint.

True to Toering’s word, the joint CBAA 2017/ADSE conference Aug. 7-12 did precisely that – enabling attendees a chance to comprehend the sheer potential that exists for future growth and development within the B.C. aerospace sector and business aviation.

Final numbers from the show were solid. According to the CBAA, the show brought in more than 1,000 exhibitors and attendees and some 100 booths. A varied static display outside the TRADEX centre also tempted attendees. The team from ADSE noted 400-plus delegates took part in its educational program and the tradeshow.

Key CBAA sessions included updates and progress reports from Denis Guindon, director of civil aviation at Transport Canada; a report on ADS-B and more from NAV CANADA’s executive vice president Rudy Kellar; an analysis of the BizAv footprint at various Canadian airports; and an update on the CRA’s current tax conundrum with operators from Jamieson Collins, a barrister and solicitor with Jamieson Collins & Company (more stories to follow on these issues in Wings.”

The show marked the seventh year for ADSE, but the first in partnership with the CBAA. Following a one-year break – the 2018 CBAA event will touch down June 19-21 at the Waterloo International Airport – the association’s will join forces and co-locate in Abbotsford in August 2019.

“I was very pleased with the show,” Jim Quick, president and CEO of the Aerospace Industries Association of Canada (AIAC), told Wings. “The CBAA is a big part of our industry and we felt it was a good fit. This helped us raise the stature of ADSE as one of the premier aerospace and defence events in Canada.

“In terms of the B.C. aerospace footprint, three years ago, the leaders of industry in B.C. came to me and said, we think we have all the tools here to be a significant aerospace cluster inside of a national framework. And it’s certainly the case – we have world-class companies that are globally focused. There are academic institutions that are some of the best in the world. You have research capability here and companies that are also the best in the world. Add in a new provincial government that is very supportive, and you have the ingredients that fuel the development of a solid cluster.”

Quick and his team are now diligently preparing for the Canadian Aerospace Summit Nov. 7-8 in Ottawa. A must-attend event, this year’s focus on innovation promises to give Canadian firms ideas and strategies to make inroads in the global aerospace market.

“Our object is to get thought leaders from around the globe, people that head our industry to come and tell us what the future of our industry looks like,” Quick said. “For them to come to Canada and share their perspectives – it’s pretty powerful stuff.”

Powerful stuff indeed. Kudos to the CBAA and AIAC for laying the foundation for growth and cohesion within important sectors of Canadian aviation.