Innovation and effective change management is never easy, no matter what stage of your professional development. It takes hard work, passion and a willingness to develop new processes while remaining efficient and flexible – a commitment to steadfastly follow a perceived vision and path. It also never hurts to inject some fun along the way. 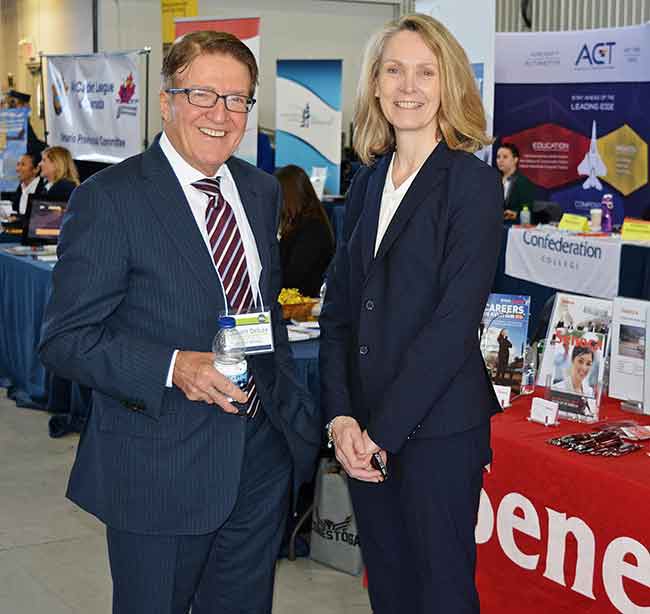 These were some of the salient messages shared by Porter Airlines’ president and CEO Robert Deluce at the Wings and Helicopters Careers in Aviation Expo (CIA) at the Porter Hangar April 9 at Toronto’s Billy Bishop City Centre Airport. The annual GTA version of the CIA Expo brought together a sold-out crowd of more than 230 air cadets, high school and college students, and aviation professionals seeking career changes to the bustling Porter Hangar for an informative day of information gathering, insight and invaluable networking opportunities with a wide cross-section of industry professionals and suppliers.

Complete with a mini-Porter lounge and a shiny Q400 shadowing the stage, it created a dramatic backdrop to showcase the possibilities and future of what a career in aviation or aerospace could bring young adults – where they could be working, on what aircraft and with what industry players. And who better to deliver an informative morning keynote, highlighting the possibilities in a career in aviation than Deluce.

Porter’s president and CEO comes from one of the most dedicated Canadian families in aviation and aerospace with more than 60 years in successfully financing, restructuring, organizing and operating regional airlines in Canada. With Porter, Deluce has seen the airline expand from two Q400s and a single route to Ottawa, to 26 Q400s and 23 scheduled destinations throughout Canada and the U.S. And if airport expansion plans at Billy Bishop are approved, future growth including the deployment of the Canadian-made Bombardier C Series will mean a bevy of new destinations and opportunities. From a career opportunity standpoint, it would mean many more blue-uniformed workers winging their way across North America.

It is a great Canadian aviation success story, giving credence to Deluce’s message that if you focus and understand your abilities (and limitations), build on your strengths, plan well, and make strategic choices for the future without being afraid to differentiate yourself from the crowd, success is a distinct possibility.

Porter’s chief executive also hit on a critical point: success will always only be predicated on the people you hire, for they truly are your wings. “In the end, it’s all about people – we are always seeking to find those future leaders who can drive change.”

Riding on the wings of the people who drive your success is an apt way to describe how Calgary’s Westjet is achieving new heights. As David Carr explains in “Spreading its Wings,” on page 28, WestJet is off to a very strong start in the New Year and is poised for one of its best operating years on record in 2016. The airline, which is the lead sponsor for the CIA Expo in Calgary May 14 at the WestJet Campus, is currently introducing its Encore regional subsidiary into the U.S. and introducing or expanding upon a number of international routes, all despite less-than-robust economic realities in Western Canada.

In sticking to its DNA and making strategic decisions in a slow economy, WestJet is finding resourceful ways to achieve its goals and find success – a worthy recipe to follow both as an individual or corporation – one I am sure Ferio Pugliese, president of WestJet Encore is bound to touch on when describing WestJet and WestJet Encore’s paths to success at the CIA Expo in Calgary.