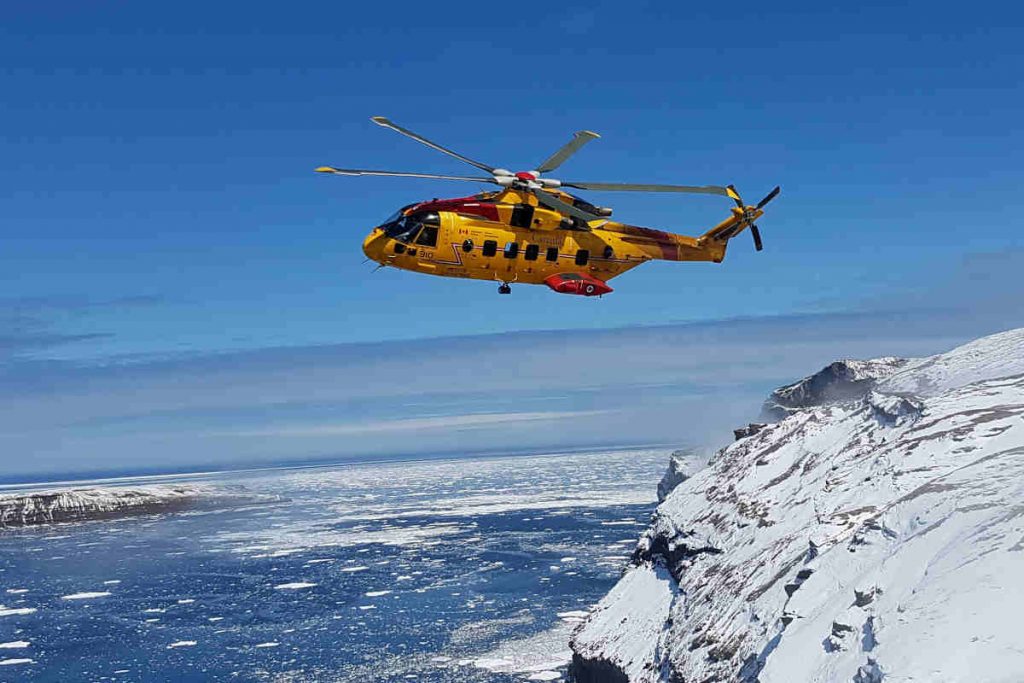 The Royal Canadian Air Force has been operating the AW101/CH-149 Cormorant since 2001, undertaking thousands of lifesaving search and rescue missions. (Photo: Leonardo)

Leonardo updated the progress of the Cormorant Mid-Life Upgrade Project during the virtual Maritime & Arctic Security & Safety (MASS) Conference, which ran from November 3 to 4, organized by the Atlantic Canada Aerospace & Defence Association (ACADA).

The Government of Canada in May 2018 committed to proceeding with the CH-149 Cormorant Mid-Life Upgrade (CMLU) Project under its Strong, Secure, Engaged defence policy. The Royal Canadian Air Force has been operating the AW101/CH-149 Cormorant since 2001, undertaking thousands of lifesaving search and rescue (SAR) missions from coast-to-coast.

Currently in the Definition Phase, the CMLU Project is major program under Strong, Secure, Engaged with a range of planned Cormorant fleet milestones, including: Extend the life of the Cormorant until 2040 and beyond; return the Cormorant fleet to Canadian Forces Base Trenton as the primary SAR helicopter; provide enhanced aircraft flight management, communication and navigation systems; address existing and projected obsolescence while incorporating maintainability and reliability enhancements; introduce modern SAR mission sensors; ensure there is no disruption to Cormorant Rotary-Wing SAR capability during the Project; and deliver Industrial Technological Benefits to Canadian companies.

Canada’s CMLU Project will leverage the existing design and development work Leonardo has undertaken on the latest generation of the AW101 – the Norwegian All Weather Search and Rescue Helicopter (NAWSARH) – that is currently being delivered to Norway.

“From the outset we have proposed a low risk upgrade solution utilizing an existing design which will provide the RCAF with much greater SAR capability and provide greater peace of mind to all Canadians across Canada,” said Dominic Howe, Head of International Campaigns, America and Canada at Leonardo Helicopters.

The CMLU Project includes augmentation of the fleet with a minimum of two additional helicopters, explains Leonardo, enabling the return of the Cormorant to the Trenton Main Operating Base, which covers the Great Lakes region.

“This isn’t a development program – it’s using commercial off-the-shelf technology,” said Howe. “This is utilizing the design and development undertaken for the NAWSARH project which will provide Canada with a low risk, and value for money solution. It also provides long-term benefits with a drive towards a standardized common configuration across multiple AW101 operators.”

Leonardo’s Team Cormorant partners include IMP Aerospace, CAE, GE Canada and Collins Aerospace. The company explains it will provide significant Industrial Technological Benefits through CMLU, as required by the government’s procurement process, including long-term domestic employment with Leonardo transferring knowledge and technology for the vast majority of the CMLU work to be performed in Canada by Canadians.

“The significant capability the CMLU Project will deliver, through the introduction of the surveillance radar, EO/IR device, the Mobile Phone Detection and Localization System and other updated systems, will ensure less search and more rescue,” said Howe.

Leonardo explains, that by transitioning the AW101/CH149 Cormorant SAR helicopter fleet to the latest standard currently being delivered for SAR in Norway, it will provide Canada with arguably the best search and rescue helicopter in the world. The proposed upgrades and enhancements, as described in greater detail by Leonardo, include:

Avionics
The avionics upgrade to the Cormorant will improve mission effectiveness through the reduction in crew workload and most importantly, it will increase safety. This is made possible with state-of-the-art avionics systems and radars which enable the crews to focus on the rescue at hand.

Glass Cockpit
The Cormorant will be updated with five 10 x 8 inch Multi-Function Display Units which will show the necessary information on the operation of the aircraft under Visual Flight Rules and Instrument Flight rules within civil and military airspace.

Avoidance Systems
A Helicopter Terrain Avoidance System (HTAS) will provide ground proximity warnings and alerts to obstacles or obstructions enhancing the ‘eyes’ of the Cormorant when in SAR mode. These technologies are further complimented by the Traffic Collision and Avoidance System (TCAS) and Automatic Identification System (AIS).

Sensors, Radar and SAR systems
The proposed CMLU upgrade also consists of an advanced EO/IR device and high intensity search light which makes locating people in challenging conditions that much easier. Utilizing the new Aircraft Management System, the search light can be automatically coupled to the EO/IR.

Leonardo also notes crew situational awareness is enhanced by an external camera system that provides the crew with a bird’s eye view of the aircraft, in addition to both an under belly and hoist view – extremely valuable when operating in close confines such as forests and cliff sides.

Sensors such as the Mobile Phone Detection and Localization system and Leonardo Osprey 30 surveillance radar will deliver an increased SAR capability, explains Leonardo, able to locate and rescue quicker in more hostile environments.

In terms of advancing the AW101 SAR type, Leonardo explains it is the sole industrial participant in ARCSAR, the Arctic and North Atlantic Security and Emergency Preparedness Network, a five-year EU program funded through the Horizon 2020, which aims to promote collaboration in security, emergency-response activities and sustainable technology development in the Arctic region. The ARCSAR project involves 13 countries and is led by the Joint Rescue and Coordination Center of Northern Norway.

As part of ARCSAR, Leonardo contributes with its heritage and expertise in areas like SAR helicopters, such as those already used by Canada, Denmark, Norway and the United Kingdom, radar systems, maritime patrol systems, communications, satellite imagery and analysis, and integrated solutions that can control and mitigate the effects of climate change.