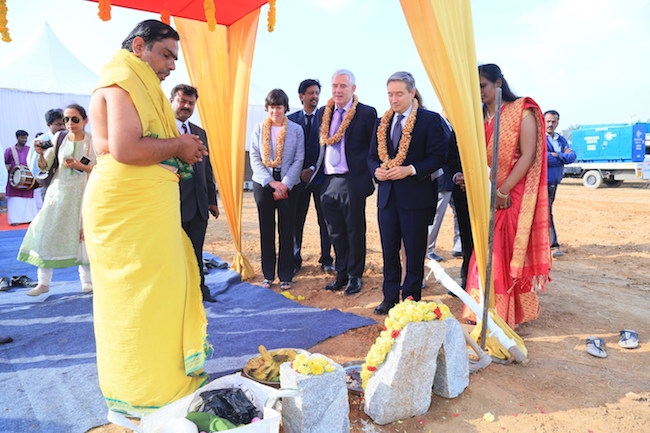 Magellan was honoured to have Canada’s federal minister of International Trade, François-Philippe Champagne participate in the event that was also attended by an esteemed group of customers, government officials and local business colleagues.

The new 140,000 square foot building will be constructed on seven acres in high itech Defence and Aerospace Park (Aerospace SEZ Sector) in Devanahalli, Bengaluru, near the Bangalore International Airport.

Already an established presence in India’s aerospace sector for more than a decade, Magellan will invest more than $28 million in this state-of-the-art manufacturing and assembly plant. Construction of the plant will be in two phases with the first phase planned to become operational near the end of 2018.

The plant will employ approximately 120 high technology and support positions, and will be equipped with a comprehensive range of high speed 4 and 5-axis machining centres, selected to optimise manufacturing efficiency.

“Canada’s world-class aerospace sector is an international success story that symbolizes excellence and provides more jobs for the middle class for both Canada and India,” Champagne said. “We are proud of Magellan’s long-standing presence in the Indian market and today’s expansion illustrates how Canadian companies have always been at the forefront of aerospace innovation. Continued commercial engagement in this region is at the core of our progressive trade agenda which helps contribute to stronger and more innovative economies for both Canada and India.”

Haydn Martin, vice president, vew business development with Magellan Aerospace added, “Magellan is excited to officially launch this important new venture in India. Together, with our two longstanding Joint Venture relationships in India – API Surface Treatments and Triveni Aeronautics PVT Limited – Magellan is positioned to be one of the largest suppliers of ‘Make in India’ manufactured commercial aircraft components. This new facility, coupled with Magellan’s extensive machining operations in Europe and North America, will give us a highly competitive offering for our customers.”

This facility supports Magellan’s major North American and European OEM customers’ drive to grow the ‘Make in India’ content on their aircraft and demonstrates Magellan’s on-going commitment to play a major role in developing the supply chain in India.