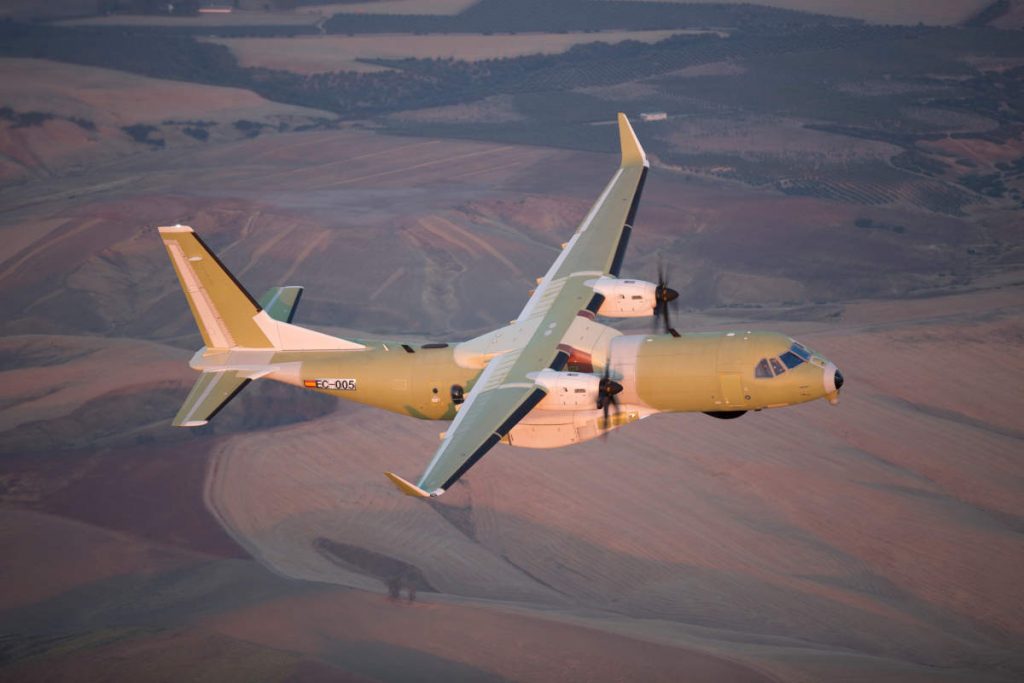 Maiden flight of the first RCAF C295, which features reinforcements in the fuselage to improve ditching operations and a hatch for rapid aircraft evacuation in case of a forced landing in the ocean. (Photo: Airbus)

The first Airbus C295, purchased by the Government of Canada for the Royal Canadian Air Force’s Fixed Wing Search and Rescue Aircraft Replacement (FWSAR) program, has completed its maiden flight. The aircraft, designated CC-295 for Canada, took off from Seville, Spain, on July 4, and landed back on site one hour and 27 minutes later.

Delivery of the first C295 is scheduled to take place by the end of 2019 when the Royal Canadian Air Force (RCAF) will begin operational testing. The contract was awarded to Airbus back in December 2016, including 16 C295 aircraft and all In-Service Support (ISS) elements like training and engineering services, the construction of a new training centre in Comox, British Columbia, and maintenance and support services.

The aircraft will be based with the RCAF’s current search-and-rescue squadrons located in Comox, British Columbia; Winnipeg, Manitoba; Trenton, Ontario; and Greenwood, Nova Scotia. Beyond the initial CC-295, Airbus explains another five aircraft are in various stages of assembly; and seven simulator and training devices are in various testing stages. In addition, the first RCAF crews will begin training in late summer 2019 at Airbus’ International Training Centre in Seville.

Airbus points out that the FWSAR program is supporting approximately $2.5 billion in Industrial and Technological Benefits (ITB) to Canada, through long-term partnerships with Canadian industry. As of January 2019, 86 per cent of what Airbus describes as key Canadian ISS tasks have been performed in-country by Canadian companies in relation to establishing the FWSAR ISS system.

The final assembly of C295s is performed at Airbus’ San Pablo industrial facility in Seville. This activity is divided into six phases taking place at different assembly stations. Work at each of the stations lasts approximately 14 days, explains Airbus, after which the aircraft moves onto the flight line and then is authorized for customer delivery. These six stations include: Wing integration, including power plant; Fuselage-wing mating and installation of landing gear and other equipment; Integration of vertical and horizontal tailplanes with the fuselage and electrical/hydraulic installation; Doors, ramp, flight control integration and functional tests; Cabin furnishing and additional functional tests; and Finishing and final functional tests.

The C295 variant that Canada is receiving is the latest version of the aircraft, equipped with winglets that make it capable of transporting more payload over larger distances. Expecting the aircraft to routinely operate in the harsh conditions of the North Atlantic, the C295s for Canada include several safety improvements like an advance avionics package, as well as reinforcements in the fuselage that improve ditching operations and a hatch to allow a rapid aircraft evacuation in case of a forced landing in the ocean.

The C295 cabin interior is also tailored to RCAF’s operational need, including a new wireless intercom system for crew communications, increased space for storing SAR equipment, additional lighting for medical evacuation duties, and lighting compatible with the use of night vision systems. The C295’s 41-foot-long cabin is the largest in its class, providing ample space for both sensors and mission systems, as well as crew rest and preparation areas.