With high winds, the Red Bull Air Races season finale was heart stopping from the very beginning. Canada’s Pete McLeod, who came to Indianapolis at third in the overall standings with a chance to take the title, was in the first heat and blazing his way to advancement over French pilot Mikaël Brageot when – going through the Finish Gate – he clipped a pylon for a three-second penalty. His 2017 championship hopes were over, but the points the Canadian had accumulated throughout a season that included four podiums were enough to hold him in third place when the race was over. 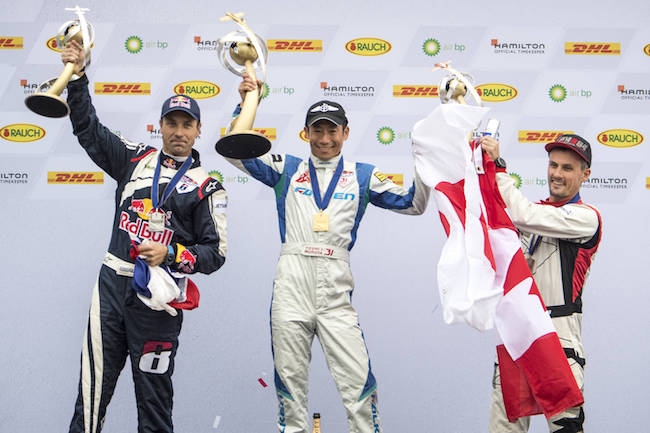 “It was wild out there, and I expected that. I had a lot of fun, enjoying the run is all you can do on a day like today, and I’d go out there again if I could. On the bright side, I made it all the way through the track before I hit my pylon, which is better than some of the guys out there. But that’s how it was today,” said the Team McLeod pilot, who will be taking his trophy home to his wife and a brand-new baby daughter. “Overall, I’m really happy with the season – you’re going to have ups and downs, but it was great.”

The Czech Republic’s Martin Šonka and Japan’s Yoshihide Muroya, ranked one and two in the standings, went head to head in the Round of 14. Flying first, Muroya’s championship hopes also seemed to be over when he incurred a two-second penalty – but in the strong winds Šonka hit a pylon for a three-second penalty that advanced Japan’s hero to the Round of 8. Muroya still couldn’t rest, because Šonka ended up advancing after all as the round’s fastest loser. When the title contenders both won their Round of 8 heats, it all came down to the Final 4.

There, going first with everything on the line, Muroya flew to a new track record of 1:03.026 that 2016 World Champion Matthias Dolderer of Germany and Spain’s Juan Velarde couldn’t match. The pressure all was on Šonka. The Czech pilot flew cleanly, but with a technical issue plus a wing stall in the Vertical Turning Maneuver, he could manage only 1:07.280, and both the race win and Asia’s first Red Bull Air Race World Championship belonged to Muroya.

As the race awards were handed out in the iconic infield of the Indianapolis Motor Speedway, Muroya was joined on the podium by Dolderer in second and Velarde in third. Then, when the World Championship trophy was presented, Muroya was sprayed with champagne by McLeod and Šonka, who finished second overall.