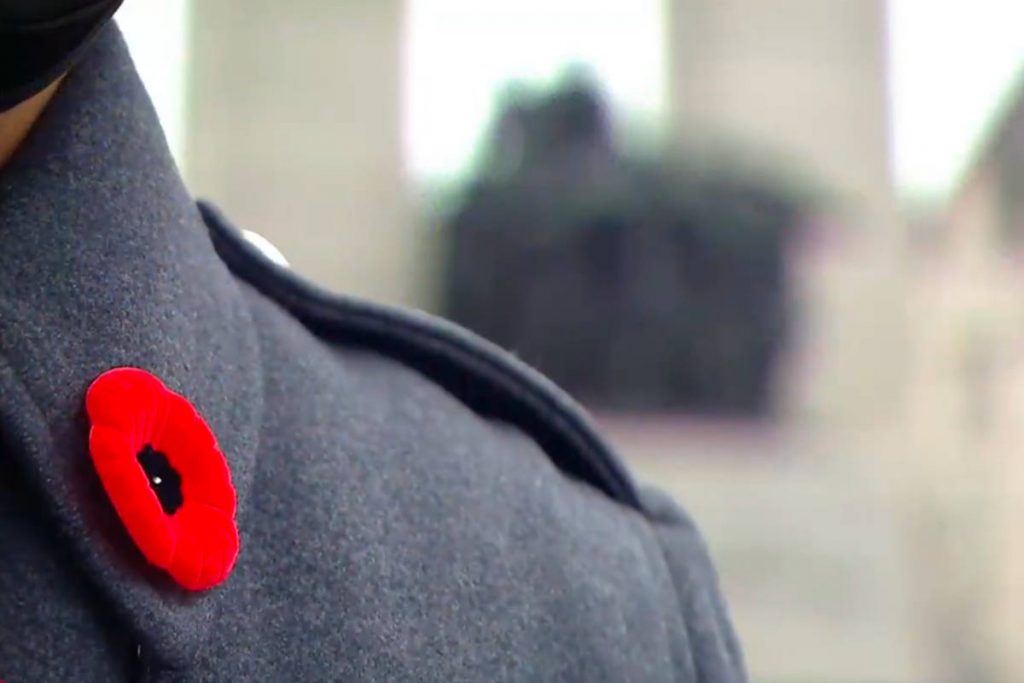 A still image from CPAC's coverage of the 2020 Remembrance Day ceremony at the National War Memorial in Ottawa. (Image: CPAC)

OTTAWA — A modest crowd gathered in downtown Ottawa to witness a solemn Remembrance Day ceremony at the National War Memorial, instead of the tens of thousands who normally show up.

Many of the wreaths were already positioned around the cenotaph, one way to keep the number of people down as the country grapples with the deadly second wave of the COVID-19 pandemic.

“On this day when so much has changed since the last time we gathered, may we be comforted by the words from Her Majesty the Queen to Canadians in the context of this pandemic,” Maj.-Gen. Guy Chapdelaine, a Roman Catholic priest who is chaplain general of the Canadian Armed Forces, said Wednesday morning.

“Hope is to be found in the care given to the vulnerable and to those in need,” he said, repeating the message twice.

Canadians are being encouraged to stay home today while they mark the service and sacrifice of those who have given their lives to defend the country.

The solemnity of Remembrance Day is butting up against the threat posed by COVID-19, prompting a small gathering of about several hundred people, rather than the usual 30,000, observe the two minutes of silence around the National War Memorial in Ottawa.

The Royal Canadian Legion is explicitly discouraging Canadians from attending Remembrance Day ceremonies in person this year and instead asking people to watch on TV or online.

Still, there was a small crowd who watched the ceremony from behind the barriers the police put along Elgin Street in downtown Ottawa, under a gloomy sky.

Chris Turenne was one of them, saying that being able to come to the ceremony is what matters to him.

He said people should be responsible and respect COVID-19 rules but the ceremony should have happened as normal.

“There’s been other protests and rallies, and they seemed to be fine,” he said. “I don’t know why this should be any different.”

As promised by the legion, there were many of the traditional elements of the ceremonies, such as the playing of the Last Post, the singing of In Flanders Fields.

A planned flyby of military aircraft over downtown Ottawa after the ceremony was cancelled due to the weather.

There was also a special emphasis on the 75th anniversary of the end of the Second World War after many commemorations planned for earlier this year in Europe and elsewhere were cancelled because of the pandemic.

Prime Minister Justin Trudeau arrived at the National War Memorial with his wife, Sophie Gregoire Trudeau. Both wore masks, as did others in attendance.

Sullivan’s son, Chris Saunders, was a naval officer who was killed after a fire broke out on HMCS Chicoutimi, a submarine that was on its way to Canada in October 2004.

They all laid wreaths as part of the ceremony Wednesday.

Replacing the usual chorus of voices were three members of the Ottawa Children’s Choir. One sang a solo rendition of the national anthem ahead of the two minutes of silence introduced by a bugle.

Another later gave a solo performance of “God Save the Queen.”

Perry Bellegarde, national chief of the Assembly of First Nations, as well as chief of the defence staff Gen. Jonathan Vance were also there. There was a small military parade with a band, but no parade of veterans down the street.

Many other legion branches across the country have also prepared stripped-down ceremonies, with parades by veterans and serving military personnel cancelled and wreaths laid before the events.

Private ceremonies are also being planned by long-term care facilities that are home to some of Canada’s oldest surviving veterans, many of whom might normally attend a local commemoration but who are at particularly high risk due to COVID-19.

On Tuesday, Trudeau encouraged Canadians to mark Remembrance Day despite the pandemic.

“Even though we can’t gather as we usually do, we can always show our support for our veterans by wearing a poppy and watching the ceremonies online on Remembrance Day,” he said in French.

“Thinking of Remembrance Day, let’s pay homage to our veterans who have given us so much and to those who continue to serve today.”

“”Reflection, remembrance, and respect — these are not actions that can only happen during parades or at cenotaphs. They are emotional acts we will uphold during a year when Canadians have dedicated themselves to adapting and persevering through these challenging times,“ he said.

A modest crowd gathered around the National War Memorial in St. John’s, N.L., Wednesday morning lifted their heads following two minutes of silence as a Cormorant helicopter soared over the harbour and the memorial below.

Residents of St. John’s were asked to observe the 11 a.m. Remembrance Day moment of silence from their doorways this year, to keep safe in a global pandemic. Still, about 100 onlookers gathered along Water and Duckworth streets by the memorial to pay their respects to soldiers lost in war. They wore masks as they bowed their heads, distanced from each other.

Premier Andrew Furey and federal Natural Resources Minister Seamus O’Regan laid wreaths of the foot of the memorial as cannon shots echoed out over the water and through The Narrows.

St. John’s Mayor Danny Breen, who grew up near the memorial, was among those laying wreaths.

His father’s eldest brother, Jack Breen, was just 19 when he was killed fighting at Beaumont Hamel with the Newfoundland Regiment.

“He was lost in action. He has no known grave,” Breen said.

Many young men in the downtown neighbourhood beside the memorial fought at Beaumont-Hamel and didn’t come home, Breen said, who has been coming down to the memorial every year to honour them.

“It’s a privilege and an honour to lay a wreath,” he said.

— With files from Maan Alhmidi in Ottawa and Sarah Smellie in St. John’s, N.L.