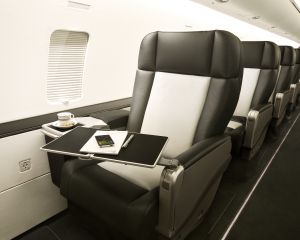 March 18, 2009, Montreal – MJET, an Elisen Group company, providers of integrated engineering, completion, customization and maintenance services for commercial and business aircraft, has announced the release of a converted CRJ200.

The 50-seat airliner was transformed into an 18-seat VIP corporate-shuttle configuration and delivered to Avmax Group; a Canadian owned company focusing on aviation support, training and management services. A second CRJ conversion is in its final stage at the MJET facility and scheduled to be delivered in April 2009 to the same operator.

“We are pleased to be actively pursuing the CRJ200 conversion market with a superior engineering and interior completion solution,” said Stéphane Durand, President, MJET. “This market is a natural fit for MJET given the expertise that our permanent team has in both business jet completions and CRJ engineering work,” Mr. Durand concluded.