A look inside Mohawk College’s new Centre for Aviation Technology, By David Carr 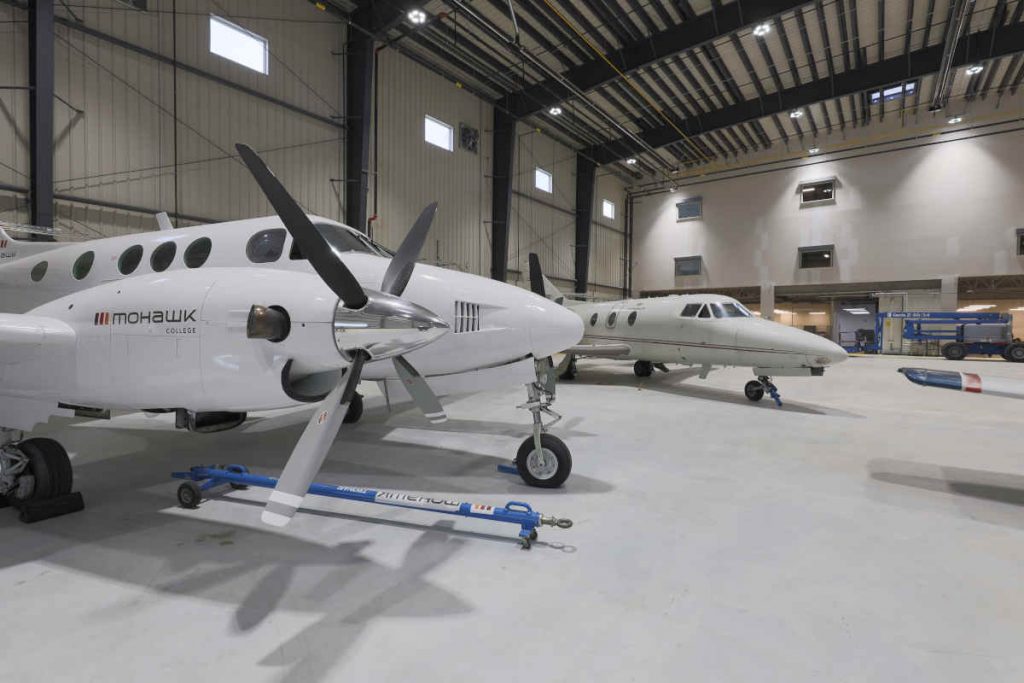 Mohawk’s Centre for Aviation Technology is housed in a 75,000-square-foot hangar at the busy Hamilton International Airport.

Canada’s aviation industry had a shortage of aircraft maintenance engineers (AMEs) before Covid-19, and will contend with a deeper skills shortage as the industry pulls out of the pandemic at a time when experienced AMEs have jumped on the Covid-hiatus to retire. For students considering a career in aircraft maintenance or aerospace manufacturing, the timing could not be better.

While the deep impact of the pandemic will be felt for years to come, the importance of air transport and travel has been reinforced by the crisis and there is a great deal of optimism that the industry will resume its pattern of growth and expansion.

Holding that long view is Hamilton-based Mohawk College of Applied Arts and Technology, which recently opened a new state-of-the-art Centre for Aviation Technology in a 75,000-square-foot hangar at the busy Hamilton International Airport.

The state-of-the-art building, which is adjacent to KF Aerospace, an Okanagan, BC-based nose-to-tail heavy maintenance and modification specialist, enabled Mohawk to consolidate its Aviation Technician – Aircraft Maintenance and Aviation Technician – Aircraft Structures and Avionics programs, previously spread out over four campuses, under one roof.

The new facility also allows Mohawk to house a fleet of 16 hands-on training aircraft, including a Falcon business jet, Sikorsky helicopter and a Boeing 727 cargo jet; and expand the college’s push into composites, the cutting edge of airplane structures manufacturing.

Operating the Centre of Aviation Technology airside at one of Canada’s fastest growing passenger and cargo airports, alongside the country’s largest commercial maintenance, repair and overhaul (MRO) provider, opens up a new world of opportunity for Mohawk students.

“We hire avionics, mechanics and structural engineers. All of the programs that Mohawk offers,” says Grant Stevens, vice president of corporate services for KF Aerospace. “This gives students the opportunity to observe real-world work that’s going on and ask questions in real time. So, that as we grow the business, it is a natural progression for Mohawk grads to come next door and continue their apprenticeship with us.”

Even during the pandemic, KF Aerospace finds itself on a growth trajectory. Hamilton has been a centrepiece of KF’s Canada-wide footprint for 25 years; and is the location for the company’s first wide-body maintenance hangar, which opened in November 2019.

KF provides third-party maintenance for Sunwing, WestJet and Air Transat, as well as a growing number of international customers. KF had outgrown their original hangar built in 1995 and, looking to support wide-body aircraft, broke ground on an ambitious 150,0000-square-foot expansion.

As one of the top aeronautical employers in Canada, KF puts a premium on creating job and education opportunities for apprentices to build their career and support its global reputation for service excellence. KF has a partnership with a local college at its MRO facility in Kelowna, BC, and Mohawk’s Centre for Aviation Technology was always part of the Hamilton expansion picture. But KF had to think bigger when they learned what the college had in mind. “It grew from carving out learning space in a new hangar to building the second hangar to support Mohawk’s vision,” Stevens explains.

“It takes highly skilled people working on airplanes to keep our customers happy and safe,” he continues. “As an employer, we can’t complain that there aren’t enough students coming out of school for us to hire if we haven’t pitched in and helped to encourage people to think about a job in aircraft maintenance and get into school. At the end of the day, it’s about the jobs.”

With MRO facilities Kelowna and Hamilton, KF can now support 19 lines of concurrent maintenance, including wide-bodies, and diversify into the lucrative aircraft modification market, including the conversion of passenger airplanes into dedicated freighters by installing cargo doors. “Our reputation for quality and on-time delivery is always exceptional,” Stevens says. “The expansion has allowed us to significantly improve customer service and slot availability. We already have the majority of Canadian airlines as customers, so the next expansion will be global.”

“There is no better place to run an aviation program than at an airport,” George Miltenburg, Mohawk’s associate dean of engineering technology, points out. Mohawk is plugged into Hamilton’s air transport scene and many of the students in the aircraft maintenance programs have jobs at the airport loading cargo, refuelling and taxiing aircraft after class.

The move to a state-of-the-art purpose-built facility has given Mohawk the coveted blank sheet of paper to build classrooms, labs, study halls and other facilities specific to needs of the industry for aviation maintenance, avionics and structures learning.

The new campus is also supporting Mohawk’s accelerated push into composite material manufacturing; and students will be involved with the research and development into one of the industry’s leading-edge technologies. “They are very forward thinking as they continue to grow their programs,” says Desirée Squires, an engineer and now the CEO of Sunset Renewables, a cleantech company that provides sustainable end-of-life solutions for the renewable energy industry.

Previously, Squires studied aeronautical engineering and worked with composites for aircraft structures. Today, lighter weight composite material can make up approximately 50 per cent of a modern airliner like the Boeing 787. Materials for the program are supplied by Airbus Helicopters Canada, part of the world’s largest commercial aircraft builder.

“Composites is a special area, because they’re more complex than traditional materials,” Squires says. “Offering these programs means that Mohawk students will be future-ready.”

Squires was recently invited to be part of the Centre for Aviation Technology’s program advisory committee and wants to focus on putting sustainability into the curriculum. “Mohawk is a big supporter of sustainability and they are already offering renewable energy training to students. It’s another new avenue of learning,” she adds.

Connections with innovative players in the airline and aerospace sectors continues to fuel Mohawk’s aviation program development. “They have great insight into what’s going on in the industry,” says Robin Lovell, president of Comtek, a highly specialized manufacturer of advanced components and MRO supporting business jets and regional airplanes for 140 airline operators worldwide. Comtek began its ties with Mohawk a few years ago when the college was looking at a composite training program, and a couple of technicians were involved in helping to develop the program.

Mohawk is a college where employers often go to snap up apprentices before they graduate. Covid has slowed that process, but Lovell is bullish on aviation’s resilience and the emerging need to back fill retired workers.

“It’s going to be a challenging couple of years. But all of the hits aviation has taken over the years, it still continues on a doubling trend after each correction,” he says. “Going into the pandemic, one of the things that was driving growth in the job market was the ageing workforce. If anything, that has accelerated during Covid. Older people at the higher-end are exiting the industry sooner. We’re going to see the skills shortage open up pretty quick.”

KF Aerospace will be ramping up operations at the Hamilton facility in the fall and expects business to be “red hot” by spring 2022, Stevens says. The new Centre for Aviation Technology and its important industry partnerships provide a built-in showcase for the future of Mohawk and the Canadian aviation industry.

“One of the great strengths of our partnership with Mohawk is students and parents can see the training environment and working environment, have candid conversations with technicians and know that there are jobs and how much they will earn at the end of training,” Steven says. “That’s a winning formula and a solid platform to build a career on.”