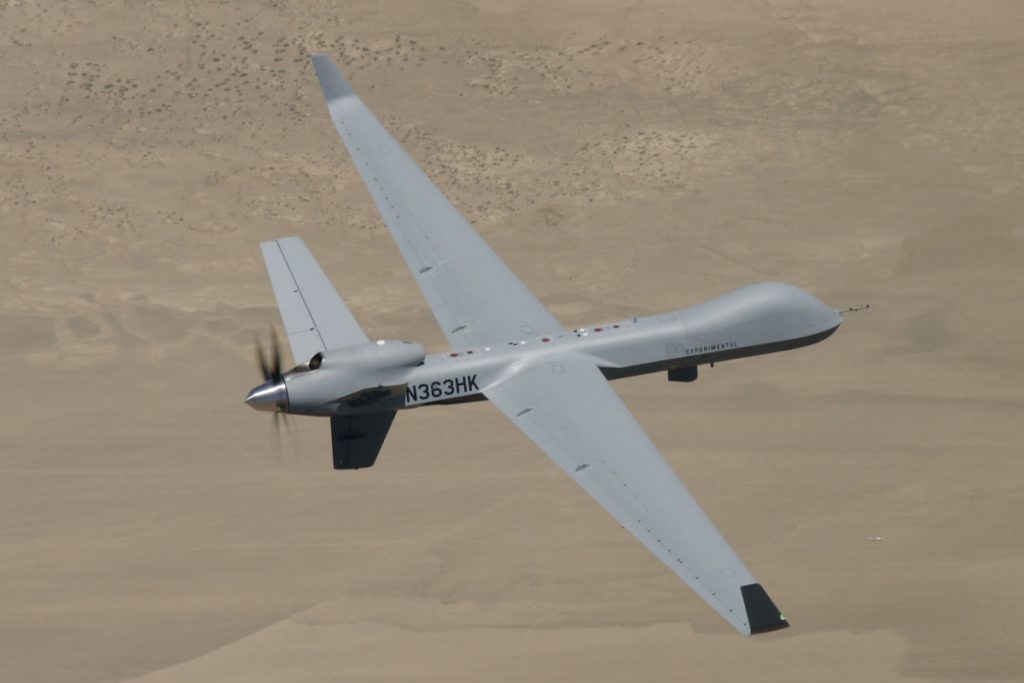 MQ-9A, when modified with the Big Wing, has an endurance of more than 43 hours, speeds of 220 KTAS, and can operate at altitude of up to 45,000 feet. It has a 4,800 pound. (Photo: General Atomics Aeronautical Systems)

GA-ASI explains a traditional limitation of long-endurance UAS has been their inability to operate at extreme northern (and southern) latitudes, as many legacy SATCOM datalinks can become less reliable above the Arctic (or below the Antarctic) Circle — approximately 66 degrees north. At those latitudes, GA-ASI explains the low-look angle to geostationary Ku-band satellites begins to compromise the link. GA-ASI states it has now demonstrated a new capability for effective ISR operations by performing a loiter at 78.31° North, using Inmarsat’s L-band Airborne ISR Service (LAISR).

The flight over Haig-Thomas Island, in the Canadian Arctic, demonstrated the MQ-9A’s flexibility by operating at very high latitudes, explains GA-ASI. The flight, which took off on September 7 and returned to the FTTC on September 8, was conducted with cooperation from the Federal Aviation Administration, Transport Canada and NAV Canada.

Covering 4,550 miles in 25.5 hours, it was one of the longest-range flights ever flown by a company MQ-9. The flight was performed under an FAA Special Airworthiness Certificate and a Transport Canada Special Flight Operations Certificate.

GA-ASI partnered with Inmarsat Government, a provider of secure, global mission-critical telecommunications to the U.S. government in the design, acceptance testing and deployment of an enhanced satellite communications (SATCOM) system. The SATCOM was one of the key enablers of the flight and consisted of a GA-ASI-designed L-band High Data Rate system, as well as an Inmarsat Low Data Rate backup datalink that could retain the aircraft’s link to the Ground Control Station even when operating in the high-latitude environment.

“As the global leader in UAS, we have enabled our UAS to operate in Arctic regions, over land and sea, where effective C2 and ISR-data transfer was previously not feasible,” said Linden Blue, CEO, GA-ASI. “As new customers come online, we want our aircraft to be able to provide them with the high data rate surveillance and high endurance that our aircraft are known for and be able to do so in any environment.”

MQ-9A, when modified with the Big Wing, has endurance over 43 hours, speeds of 220 KTAS, and can operate at altitude of up to 45,000 feet. It has a 4,800 pound (2,177 kilogram) payload capacity that includes 4,000 pounds (1,814 kilograms) of external stores. It provides long-endurance, persistent surveillance capabilities, with Full-Motion Video and Synthetic Aperture Radar/Moving Target Indicator/Maritime Radar. MQ-9A Big Wing is equipped with a fault-tolerant flight control system and triple redundant avionics system architecture. It is engineered to meet and exceed manned aircraft reliability standards.