Features Operations
Mustangs on the Horizon

Is the market ready for Cessna's VLJ? 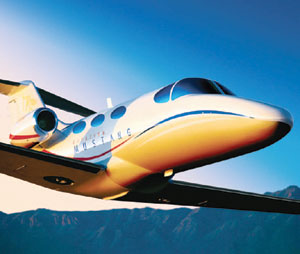 Safely flying a single-pilot, twin-engine light jet has never been one
of aviation’s easier tasks, but these days it seems like everybody
wants to take a crack at it – enough interest to justify the creation
of an entirely new class of aircraft, the Very Light Jet. And now, as
we slide farther into 2006, no fewer than a dozen companies are
actively developing VLJs in the US$1- 3 million range. Are all of them
going to make it? The harshly Darwinian history of this industry says
no, but like baby turtles scampering for the sea, a few will always get
through. At this point the quickest and most confident turtle on the
beach appears to be Cessna’s Citation Mustang. The aircraft has an
orthodox low-wing design crafted mainly from aluminum, with a chubby
countenance, flattish oval side windows and a pair of aft-mounted
turbofans mounted in the back under a high T-tail. It’ll cruise
comfortably in the flight levels at 340 knots – a speed comparable to
that of a World War II fighter – and make it from Calgary to Montreal
with a fuel stop in Thunder Bay if the winds and Nav Canada cooperate.

But
what makes the Mustang unique among its peers is that it has a solid
support structure behind it. For those joining us late, Cessna has for
decades owned a commanding share of the corporate jet market. So, while
a long list of startup companies had revealed their VLJ development
plans by mid-2002, it wasn’t until Cessna launched the Mustang at the
NBAA convention in September of that year that the engine manufacturers
and other industry heavyweights began taking the concept seriously. If
an organization like Cessna is getting in on this market, they figured,
then it must be real.

Still, for Cessna to compete with
celebrated VLJ startup Eclipse, whose aircraft was then priced under
US$1 million a copy, it was clear that the Mustang could not simply be
a shrunken variant of the US$4.3-million CitationJet CJ1. Clearly,
radical action was needed to corral the Mustang at a price point
millions less than the next Citation up the line.

NEVER SAY CHEAP
Cessna’s
answer is to construct the smallest Citation as inexpensively as
possible and pull out many of the bits that make its bigger jets so
pricey. Mustang wings and tail sections will be built in Columbus,
Georgia, where labour costs are significantly lower than in Wichita,
with final assembly occurring at the company’s streamlined, high-output
single-engine piston aircraft plant in Independence, Kansas. Also, it
doesn’t hurt to be a risksharing partner on the new Pratt & Whitney
Canada PW615F turbofan engine (new engines emerge so rarely that launch
customers typically get a significant break on the price), or to use
the Garmin G1000, a relatively low-end Electronic Flight Information
System already offered with Cessna’s top-end piston singles.

Other
ways to make the Mustang’s business case bespeak Cessna’s refined
ability to match product to market and make a profit. They’ve omitted
the typical cockpit centre pedestal and skipped the composite flaps,
gear doors and horizontal stabilizers used on the larger Citations.
Mustangs will have a sealed lead-acid battery instead of an expensive
nickel-cadmium unit and its complex over-temperature regulation system.
Instead of an engine-driven hydraulic pump and related plumbing to work
the landing gear, Cessna has gone with a hydraulic power pack not
unlike the one found on oldstyle single-engine retractables like the
Cessna 182RG and 210. In addition, they’re using an automotive style
ventilation system instead of Wemacs (those turning ball thingies) for
each seat.

This is not to imply that the Mustang is cobbled
together with leftovers from the Cessna parts bin. Refinements featured
on the aircraft include a dual-zone environmental control system with
temperature controls for each respective side, with an 8.33-psi
pressure differential providing an 8,000-foot cabin altitude at 41,000
feet. The fuel system is a wet-wing type with overwing fuelling and the
ability to run any engine from either wing fuel source. A 28-volt DC
electrical system will be provided through dual generators and battery
buses, including an emergency bus, to keep key systems running should
the primary electrical power system fail.

In the unlikely event of a hydraulic power
pack failure, the Mustang pilot can still blow down the landing gear
using a nitrogen bottle system that doubles as an assist for emergency
braking. The trailing link main landing gear is uncovered in its wells,
while the nose gear is covered, extending forward and retracting
backward. Landing gear deployment is allowed at all speeds up to
maximum, so it may be used to slow the aircraft during rapid descents.
Flaps are electric and each wing has a set of clamshell-type speed
brakes. In short, the Mustang is a highly evolved design incorporating
many of the latest safety features found on much larger and more
expensive jet aircraft.

PRODUCTION PICTURE
Examined in
detail at the recent 2005 NBAA convention in Orlando, the first
production Mustang has a squat, purposeful look and from a fit and
finish standpoint, was absolutely undistinguishable from its larger
Citation brethren. And, judging by the constant crush of middle-aged
shoppers around Production Unit 0001, customer interest in the new
aircraft among its target market has never been higher. Since September
2002, Cessna has taken around 230 Mustang orders, each secured with a
non-refundable US$10,000 deposit. In August 2003, not long after a
Mustang mockup appeared at EAA AirVenture 2003 – the world’s largest
general aviation gathering – Cessna collected US$50,000 that served to
solidify those existing orders. First flight of the Mustang prototype
on April 27, 2004 required depositors to invest additional money, with
the balance most likely due on delivery. As with any new aircraft, some
orders are made with arbitrage in mind. Savvy investors put money down
when a new airplane is announced, then sell their ‘delivery position’
for considerable profit when the price of the aircraft under
development begins its inevitable climb.

Several Canadian
operators have placed orders for Mustangs, but as for who they are and
how many they’ve purchased, Cessna isn’t saying. Nor would we expect
them to. What Cessna has divulged is that the Mustang, despite its
rapid development, remains a work in progress. A lot has to happen for
the aircraft to meet its key milestone dates – the big one being FAA
certification before the end of 2006. To support early Mustang
production, 45 Independence based and 15 Columbus-based Cessna
employees moved to Wichita to build the airframes and install systems
on the certification flight test and ground test aircraft, and
production tooling was moved to Independence in July.

Before the
Mustang final assembly line is fully operational, however, the 400,000-
square-foot Independence plant will receive an 112,000- square-foot
addition that includes a production flight test support building, a
‘sandand- fill’ building for painting and an expansion of the current
delivery building. By the time the Mustang enters full-rate production
in the spring of 2007, the Independence facilities will employ more
than 850 people.

POWER PLAY
Engines represent the
greatest unknown of the Mustang program, but Montreal-based P&WC
appears to be performing under the pressure. Early versions of the
PW615F engine have flown more than 700 hours on a Citation CJ1 test bed
aircraft and 1,700 hours in the test cell, and Cessna says around half
of all certification testing tasks had been accomplished by the late
fall of 2005. Such tasks include icing, overspeed and cold starting
tests, as well as a test that requires the engine to keep running after
a chicken (dead, plucked and thawed) is fired into it from a
compressed-air cannon. This simulates resistance to bird strike in
flight, an FAA requirement dating back to the forties.

Engineers
are also working to fine-tune a Full Authority Digital Engine Control
(FADEC) system that translates to singlebutton starts and easy
operation for Mustang pilots. FADEC also provides another important
advantage that’s made it the standard on new jets. Traditionally, jet
engines always produce a measure of thrust while they’re running,
obligating pilots to heat up their brakes or deploy thrust reverse to
keep taxi speeds down. FADEC eliminates this residual thrust, and thus
the need to attenuate or reverse it.

Though some would consider
it risky to develop a new engine and airframe at the same time (Vern
Raburn over at Eclipse probably has a few opinions on this topic), this
doesn’t appear to be an issue with the Mustang. P&WC engineers are
performing test runs that simulate the Mustang’s expected flight
profiles, air starts, ground power starts and other scenarios that
pilots will face in the field. While the numerous details and
arcane-seeming requirements are important and are often a challenge to
resolve, it appears that the two critical points – that the new
turbofan is able to reach its weight and 1,350-pound thrust target –
are being met. In the rest of the market, competition to the PW600 is,
at this point, limited to Williams International, whose FJ44 engines
power the Cessna CitationJets. Williams’ newest is the FJ33, a small
fan now making its appearance on the ATG Javelin and Adam A700 – two
VLJ proposals that, oddly enough, hail from the same Denver suburb. A
smaller variant of the PW600, the PW610F, is slated for the Mustang’s
main competitor, the Eclipse 500, and P&WC is planning a family of
PW600-series engines producing anywhere from 900 pounds (as on the
Eclipse) to 3,000 pounds of thrust. Future turboprop and turboshaft
engines based on this common core could one day serve as the follow-on
to the ubiquitous PT-6A engine family.

THE BIG QUESTION
Despite
all the talk about professionally flown VLJ ‘air taxis’ filling the
skies, the average Mustang pilot is likely to be the well-heeled owner
of same. It is safe to assume that the person who can afford to buy a
US$1-3 million jet has not spent a lengthy apprenticeship building the
thousands of hours of flight experience traditionally required of
pilots moving up to command aircraft of this speed, range and
complexity. This is the most controversial aspect of the light jet
movement and the VLJ manufacturers can hardly be blamed for being a bit
defensive about it.

“We’re aware that the guys flying the
Mustang might not be as experienced as we’re used to seeing on our
other jets,” says Russ Meyer III, a 10-year Cessna veteran who heads
the Mustang program. “We’re working on a simulator training program and
on a mentor system where an experienced pilot flies with the customer
until they can operate safely and feel comfortable. Still, we know the
market and we’re doing everything we can to make this airplane as
simple and as easy to fly as possible.”

Will the Mustang and the
other VLJs make it? If any of them do, it is likely to be this one, due
to Cessna’s unquestioned track record in bringing new aircraft to
market and supporting them over lifetimes measured in decades. The
larger question is whether the world is ready for very light,
owner-flown jets. Those who say “no” should consider another radical
aviation idea, one that survived its critics to revolutionize an
industry. Of course we’re referring to that uniquely Canadian baby
turtle, the regional jet.