Help Wanted: Seeking intelligent, capable engineers, scientists, educators and pilots willing to sleep in their office in exchange for a great view. 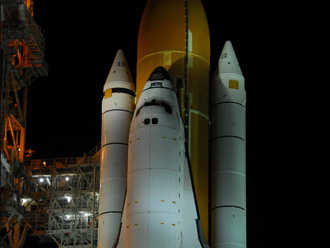 Help Wanted: Seeking intelligent, capable engineers, scientists, educators and pilots willing to sleep in their office in exchange for a great view.

NASA’s looking for candidates for its 20th astronaut class. In the past 48 years, NASA has hired 321 astronauts, but this group will have the distinction of being the first class since 1978 to be selected for something other than shuttle flight. Because the selection period won’t end until 2009, and because it takes about two years to train to become an astronaut, this new class won’t be ready to fly until 2011 – a year after the space shuttle program is scheduled to be retired.

Still, the astronaut program thinks it can make applicants an appealing offer: the chance to spend three to six months orbiting the Earth from 200 miles up, in the International Space Station.

“The long-duration flights are strenuous and more tedious, and training time is longer,” said Duane Ross, astronaut candidate selection and training manager. “But can you imagine being in space for 90 days or six months? It’s awesome.”

Awesome pretty much describes most of the astronaut experience, according to those who have been there and done that. The training is difficult, they say, and the hours sometimes long. But the payoff is worth it, if a little on the surreal side.

The space station is the largest international scientific and technological endeavor ever undertaken. It’s a permanent laboratory in a realm where temperature, pressure, even gravity can be manipulated in ways impossible on the ground, making it the perfect test bed for the technologies of the future and the best place to learn about living in space – not to mention an exciting place to work.

“We’re up there, using the space station to figure out how to go other places in the universe,” said Suni Williams, a station flight engineer who recently broke the record for longest spaceflight by a woman after spending 195 days in space. “I think it’s something we need to do as we’re getting more and more people on this Earth. How to work in a low-gravity environment and how to work in an environment that is not habitable for us – that will take us to the next place.”

And speaking of the next place, astronauts selected for the class of 2009 are going to right in the middle of preparations for NASA’s next big adventure.

“What we’re doing right now is planning for Constellation, Orion, Ares – going back to the moon,” Ross said. “I was here when we went to the moon the last time, and that’s really exciting stuff. This class that we select will be here during all that preparation time, all the planning. There will be some really interesting things for them to do and be involved in.”

And eventually, when all those preparations come to fruition, members of this class could be among the ones to see them through.

“The opportunity for this class to participate in exploration is something that hasn’t been at NASA since the Apollo program,” Steve Lindsey, chief of the astronaut office, said. “We’re actually entering a completely new phase of exploration. While we’re in the low Earth orbit, long-duration business, we’ll also be transitioning to the interplanetary phase, starting with the moon. I, personally, would love to be coming in as a new astronaut for this next decade. The opportunities are tremendous.”

A future full of moonwalks may be a little hard to imagine, but Leland Melvin, who will be taking his first flight into space later this year, would tell you that it’s worth giving it a try. As a chemist, he never planned to become an astronaut or even considered trying until a friend of his joined the program.

“I applied and came down to Houston for an interview,” he said. “And it was all these people, these top gun military pilots and triple Ph.D.s, and I thought, ‘Wow.’ I went through the whole process not thinking that I’d get in, just kind of a whim thing. And then I got a phone call – ‘Hey Leland, we want you to come down.’”

To be eligible to apply, you need to be a United States citizen with a bachelor’s degree in engineering, biological science, physical science or mathematics and either 1,000 hours of pilot-in-command time, or three years of experience in your field or as a teacher. Advance degrees can be substituted for experience, however – a master’s degree counts for one year of experience, and a doctorate counts for three.

You also need to have vision correctible to 20/20 – though for the first time, NASA is accepting applicants who have had refractive eye surgery, if one year has passed without problems since the procedure. In addition, your blood pressure should be below 140/90 and your height between 62 and 75 inches.

The astronaut selection board will narrow the pool down based on their applications, and then invite finalists down for a week of medical screenings, personal interviews and orientation. At that point, Ross said, if you meet all the medical requirements, the board will be looking for people with a good technical background who are hands-on, practical operators – and who are nice people.

“The bottom line is, you’ve got to be a nice person,” he said. “You’ve got to be able to get along with people. If you get assigned a station mission, you’re going to be up there for a long time. The thing I’m thinking about is, would I want to fly with this person.”

And if you aren’t selected for the 2009 class, that doesn’t mean you should give up. Clay Anderson, who’s been living on the space station since June, applied for every astronaut class between 1981 and 1998 before he was finally chosen.

“Mentally it was hard to get that little card that said, ‘Thanks, we got your ap, but we didn’t select you,’” he said. “I wish I would have saved all those cards. But as far as I’m concerned, it’s been worth the wait.”

Applications are due by July 1, and can be submitted at www.usajobs.gov . More information on the qualifications and job responsibilities can be found at www.nasa.gov/astronauts/recruit.html .