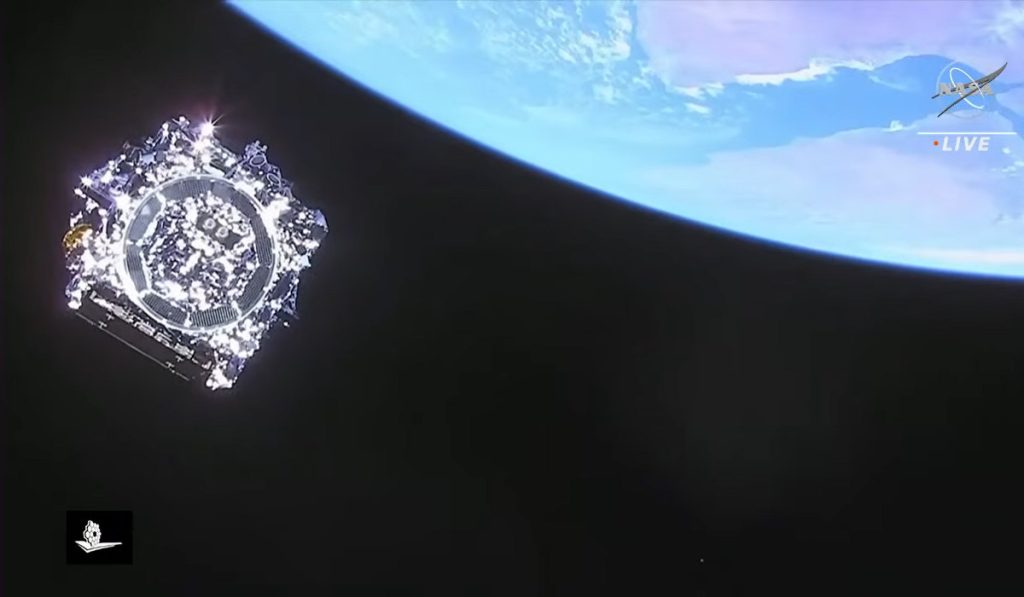 This image, captured by cameras on the upper stages of an Ariane rocket, holds what NASA describes as humanity’s final look at the James Webb Space Telescope as it heads into deep space. The telescope was to then begin a critical two-week process to deploy its antennas, mirrors, and sunshield. (Image: Arianespace, ESA, NASA, CSA, CNES)

CAPE CANAVERAL, Fla. (AP) — NASA’s new space telescope is on the verge of completing the riskiest part of its mission — unfolding and tightening a huge sunshade — after ground controllers fixed a pair of problems, officials said Monday.

The tennis court-size sunshield on the James Webb Space Telescope is now fully open and in the process of being stretched tight. The operation should be complete by Wednesday.

The $10 billion telescope — the largest and most powerful astronomical observatory ever launched — rocketed away Christmas Day from French Guiana. Its sunshield and primary mirror had to be folded to fit into the European Ariane rocket.

The sunshield is vital for keeping Webb’s infrared-sensing instruments at subzero temperatures, as they scan the universe for the first stars and galaxies, and examine the atmospheres of alien worlds for possible signs of life.

Getting the sunshield extended last Friday “was really a huge achievement for us,” said project manager Bill Ochs. All 107 release pins opened properly.

But there have been a few obstacles.

Flight controllers in Maryland had to reset Webb’s solar panel to draw more power. The observatory — considered the successor to the aging Hubble Space Telescope — was never in any danger, with a constant power flow, said Amy Lo, a lead engineer for the telescope’s prime contractor, Northrop Grumman.

They also repointed the telescope to limit sunlight on six overheating motors. The motors cooled enough to begin securing the sunshield, a three-day process that can be halted if the problem crops up again, officials said.

“Everything is hunky-dory and doing well now,” Lo said.

Ochs expects the tightening of the sunshield to be drama-free.

“The best thing for operations is boring, and that’s what we anticipate over the next three days, is to be boring,” he told reporters in a teleconference.

If that holds true, the telescope’s gold-plated mirror — more than 21 feet (6.5 meters) across — could unfold as soon as this weekend.

Webb should reach its destination 1 million miles (1.6 million kilometers) away by the end of January. As of Monday, the telescope was more than halfway there. The infrared telescope should begin observing the cosmos by the end of June, ultimately unveiling the first stars and galaxies formed in the universe 13.7 billion years ago. That’s a mere 100 million years after the universe-creating Big Bang.

Launched in 1990, Hubble, which sees primarily visible light, has peered as far back as 13.4 billion years ago. Astronomers hope to close the gap with Webb, which is 100 times more powerful.

In another bit of good news Monday, officials said they expect Webb to last well beyond the originally anticipated 10 years based on its fuel efficiency.