Nov. 25, 2008 - Ottawa - NAV CANADA is proud to announce that David Longman, Flight Service Specialist at Lloydminster, Alberta, is this year's recipient of the Air Traffic Control Specialist of the Year Award for Flight Service.

Longman was celebrated for his efforts in helping an 18-passenger aircraft narrowly avert disaster at Lloydminster Airport during severe weather conditions on June 21, 2007. 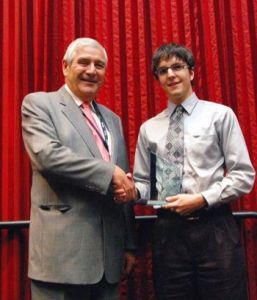 The 21 year-old Flight Service Specialist was working the radio position as a Central Mountain Air flight was set to take off on the departure runway.
With thunderstorms in the area, Longman advised the captain of convective
activity and a dark wall of precipitation close to the airport.

As the plane was a few hundred yards down the runway, he noticed a
Significant dangerous tail wind forming as a microburst and alerted the
captain of the rapidly worsening conditions. With the tail wind now gusting up
to 40 knots, the captain rejected the takeoff scant seconds before rotation.

"David's swift and decisive action exemplifies the dedication and commitment to safety that NAV CANADA employees constantly strive for," said Rudy Kellar, Vice President of Operations. "David is a skilled and dedicated Flight Service Specialist who, at a young age, is already living the values of this important group of aviation professionals. We're pleased and proud to see his excellent work recognized with this prestigious international award."

Longman also earned praise from the Central Mountain Air captain. In a letter of commendation, he cited the urgent call warning the crew of the dangerous microburst, saying that his assertive and authoritative communication was integral to the subsequent reject of the takeoff roll.

He had been working as a Flight Service Specialist for just under one
year at the time of the incident. Both his father and mother have careers in
Air Traffic Services working at the Edmonton Flight Information Centre and the Villeneuve Control Tower.

The medallion was presented on November 4, 2008, by Peter Challan,
Chairman Elect of ATCA at the association's annual awards ceremony held in
Washington D.C.  Upon presentation of the award, Longman was cited for his
situational awareness, swift action and clear, authoritative communications.

His efforts had earned him recognition from NAV CANADA earlier this year with a Chairman's Award for Employee Excellence in the category of Safety.