A look at Nav Can's first decade of operations. 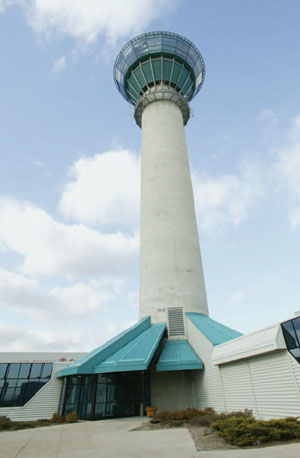 At the beginning of the 1990s, the Canadian government faced a very
political problem. The air navigation system (ANS), consisting of the
air traffic control towers and Area Control Centres, Flight Service
Stations, radars and other infrastructure, was in trouble. Costs were
out of control and service levels were declining. The main funding
mechanism, an Air Transportation Tax, was insufficient to cover costs
and by 1994 more than $200 million was being drained from general tax
revenues annually. The system was clearly overbuilt, but efforts by
Transport Canada to rationalize ANS operations were thwarted by local
political interests. The radar modernization program was far over
budget. Airline customers were furious, but no relief was in sight
unless the rules of the game changed. Virtually all stakeholders, from
air traffic controllers to consumer groups, advocated a rethink of the
way services were delivered.

In
1996, the Canadian Air Navigation Services Commercialization Act
(CANSCA) created a commercialized entity called Nav Canada, which
purchased the ANS for $1.5 billion. The new creation was a non-share
capital corporation with a stakeholder board of directors. Since it had
no shareholders, it had no profit motive. Any “excess revenue” could be
used to pay down debt or finance capital programs; otherwise it would
be rebated to the airlines. The use of debt financing, rather than
equity, also meant that the company could operate without the
expectations for profit that would have been demanded by investors.

John
Crichton was selected as chief executive officer and has guided the
corporation through its turbulent early years to its current status as
one of the most respected ANS providers in the world. For Crichton, the
initial goals remain at the heart of the corporate philosophy: “Our
goals were to create a corporation that could take over the ANS,
maintain or enhance the safety of the system, improve the service
levels and do it more cost effectively. That’s what we focus on and by
any measure we have achieved these goals, despite some obstacles we
have encountered on the way.

“Safety in the system is
demonstrably better; the data indicate that. The service has improved,
the trend was going the wrong way before and that has been reversed,
and the costs are way better. Notwithstanding the 9/11 problem and
everything else, our increases in charges were about 15 per cent below
inflation through the period. We set targets in those areas, and when
we compare ourselves with other ANS providers in the world, we are
meeting or exceeding them.”

Many of the efficiency gains do not
show up in the Nav Canada coffers but in those of its customers. The
Northern Radar Program has produced $18 million in fuel savings to date
because aircraft are able to fly more often at economically optimal
altitudes and with fewer diversions for separation. The implementation
of Reduced Vertical Separation Minima has generated $39 million. Total
customer savings from capital projects and changes in operations are
$100 million per year.

The company inherited a troubled air
traffic management (ATM) system development program and simply getting
it operational was a significant achievement. The experience brought
about a very conservative approach to software rollout: high use of
proven commercial off-theshelf applications, combined with “spiral
development,” which ensured that working versions of the software were
in place while new functionalities were added. This way of doing
business, led by vicepresident and chief technology officer Sid Koslow,
involved operational level controllers in the development process and
led to the formation of one of the best in-house ATM development teams
in the world.

What started as an effort to control internal
costs and development risks has become a development shop that sells
its products abroad: the Gander Automated Air Traffic System (GAATS)
has been adopted by the UK’s ANS for oceanic control and the Extended
Computer Display System (EXCDS) – a “stripless tower,” which provides
controllers a purely electronic environment, has been sold in the UK
and to Copenhagen airport.

“Any other ANS in the world would
look at our technology and our technology management as the best in the
world,” says Crichton. “We spend half the money the government did, but
we get three times the product three times as fast. We are not captive
to any suppliers and in fact we are becoming a supplier.”

The
most difficult changes were in the area of labour relations, in an
environment in which almost everything changed simultaneously.
Government work patterns were supplanted by private sector standards,
administrative functions were rationalized, employment in the company
fell by 1,000 and productivity rose 22 per cent. The corporation
reduced the number of control towers from 44 to 42 and Flight Service
Stations from 83 to 63, centralizing many flight information functions
such as flight planning and weather briefing into six New Flight
Information Centres, and at the same time opening seven new Community
Aerodrome Radio Stations (CARS) for a total of 50 (most of these in the
North).

Crichton believes that the trauma for the workforce was
greater than would be experienced in a corporate merger: “In the early
years there were a number of things happening that were not conducive
to good labour relations. There were some inflated expectations of the
wage settlements that could be achieved as the result of privatization
and there was disappointment when those expectations were not met. And
all that was happening at the same time we were restructuring the
business. There were major changes and layoffs; the management group
itself was being affected. As time went on and we settled in, I think
people realized that the company was trying to accomplish its mission,
doing it honestly and achieving success. And people started to buy in.
Our unions have a reasonable approach to wages and a constructive
approach to problem solving.”

The business of an ANS is not
static. Future developments define a new operating paradigm for air
traffic management that is as significant as the evolution from primary
to secondary radar. Automated dependence surveillance (ADS-B)
technology offers an increased level of safety at one-tenth the price
of radar. Groundbased stations, coupled with airborne components, allow
a “radar-like” environment that provides pilots increased situational
awareness and the controllers a more accurate position for the
aircraft. In most of northern Canada, international overflights are
managed using “procedural” separation standards that require aircraft
to be separated by 10 minutes over a fix, or roughly 80 nm. The
deployment of ADS-B can reduce that to the five-mile standard of an
enroute radar environment.

“We have recently announced that we
see the future system as a satellitebased, with ADS-B as its backbone,”
says Crichton. “We will fill in the Hudson Bay basin first, followed by
the rest of the north. We will put PAL stations across the north and
overlay that with ADS-B. We will basically eliminate procedural [IFR
control] in the domestic airspace. The third phase will be to deploy
ADS-B in the south.”

The first phase of the project will cost
$10 million but will generate $200 million in reduced fuel costs over
the next 15 years. The deployment of ADS-B in the southern domestic
airspace will be fully coordinated with deployment in the U.S. and the
international blueprint developed by ICAO.

As Nav Canada enters its second decade, the corporation has its eyes firmly on the future.