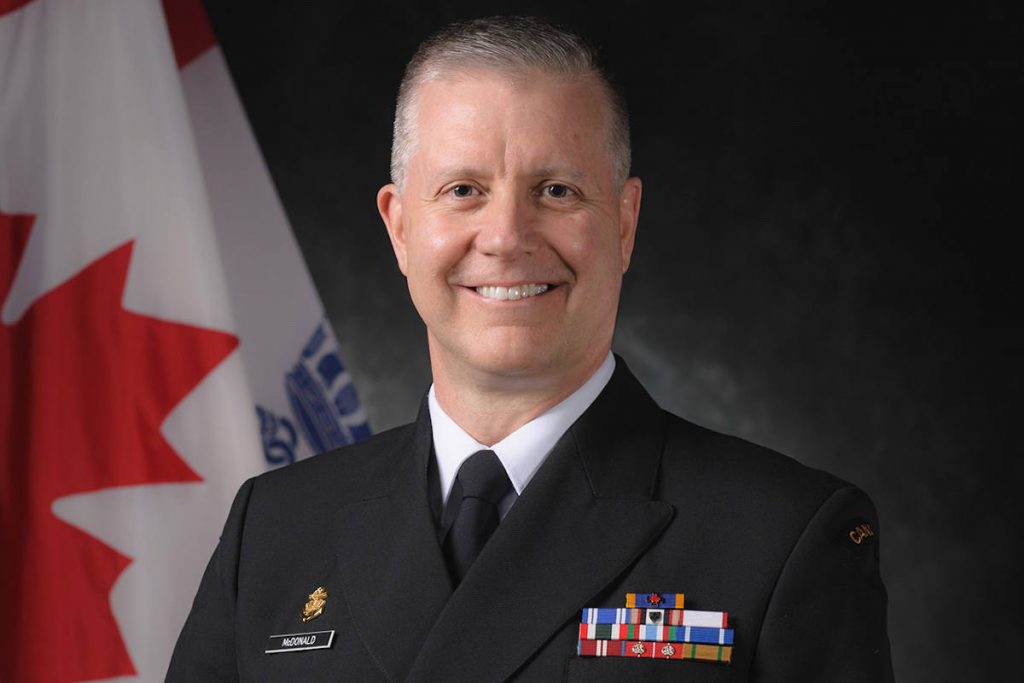 OTTAWA — The federal Liberal government has tapped a sailor to steer the Canadian Armed Forces, appointing Royal Canadian Navy commander Vice-Admiral Art McDonald as the next chief of the defence staff.

Prime Minister Justin Trudeau announced McDonald’s appointment during one of his regular COVID-19 updates on Wednesday, ending months of speculation about who would succeed Gen. Jonathan Vance as Canada’s top military commander.

“In his new role as chief, Vice-Admiral McDonald will oversee the work of the Canadian Armed Forces, including on vaccine rollout through Operation Vector,” Trudeau said in reference to the military’s role distributing COVID-19 vaccines across Canada.

“I know that Vice-Admiral McDonald’s leadership and expertise will be invaluable as the armed forces continue to work around the clock to keep Canadians safe.”

A former frigate captain who oversaw part of Canada’s humanitarian response to the devastating earthquake in Haiti in 2010 before commanding the country’s Pacific fleet, McDonald will be the first naval officer to serve as the permanent defence chief since 1993.

A change of command ceremony is planned for the week of Jan. 11, when McDonald will formally take over from Vance.

Wednesday’s announcement followed months of speculation around who would succeed Vance, who first announced in July that he was planning to retire after more than five years at the helm.

Congratulations to VAdm Art McDonald on his upcoming appointment as our new CDS. Welcome aboard! And thank you, General Jonathan Vance, for your unwavering leadership over these past 5 years. We wish you a happy retirement, Sir. Pro patria!https://t.co/B2AZ8J635L pic.twitter.com/msGjl3bGVM

Much of the speculation had revolved around whether Trudeau would appoint Canada’s first-ever female chief of the defence staff by tapping Lt.-Gen. Christine Whitecross for the job.

Not only was Whitecross the highest-ranking woman to have served in uniform, she also led the military’s early efforts to crack down on sexual misconduct in the ranks following the launch of Operation Honour in 2015.

Trudeau also raised eyebrows when he declared in an interview last week that one of the next defence chief’s top priorities would be to crack down on right-wing extremism, white supremacy and hate in the Armed Forces.

Yet McDonald’s appointment speaks to another looming challenge for the military and Liberal government: the ongoing effort to build a fleet of new warships for the Navy, and concerns the $56 billion set aside by Ottawa for those 15 ships won’t be nearly enough.

The parliamentary budget officer will release a report next month on the expected costs of those warships. There has been a great deal of handwringing inside the Department of National Defence and some corners of government that the price will be billions higher.

That would set off a fresh round of lobbying by defence companies — add more pressure on the government — to abandon the project, which is supposed to see 15 Type-26 frigates built at Irving Shipyards in Halifax over the next 20 years, and go another route.

It is also likely to force some tough discussions within the military and government about whether to throw more money at the project, which was originally budgeted at $24 billion when it was launched in 2011 — or dramatically scale back the plan.

While the government made no mention of the warship project as it announced McDonald’s appointment on Wednesday, Defence Minister Harjit Sajjan said the new defence chief will be responsible for continuing to implement the Liberals’ 2017 defence policy.

That includes spending billions of dollars over the next 20 years on new equipment.

Sajjan said in a statement that McDonald will also “continue the work to transform the culture of the Canadian Armed Forces to ensure zero tolerance for sexual misconduct and harassment while eliminating hateful conduct and systemic racism from the organization.”

Trudeau and Sajjan also thanked Vance for his service, including his more than five years as chief of the defence staff, the longest-ever tenure for a Canadian military officer in that position.

Vance took over as defence chief in July 2015 as the military was fighting the Islamic State of Iraq and the Levant in the Middle East and struggling to deal with complaints about sexual misconduct at home. His first order was to establish Operation Honour.

McDonald will be the first naval officer to serve as the military’s top commander since vice-admiral Larry Murray filled the position on an acting basis in 1996-97. The last sailor to hold the position on a permanent basis since Admiral John Rogers Anderson in 1993.