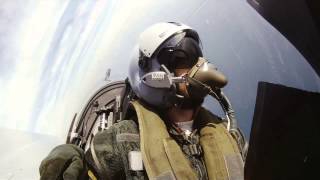 On March 20, 2014, Dassault Aviation organized a formation flight of the nEUROn unmanned combat air vehicle (UCAV) with a Rafale fighter and a Falcon 7X business jet. It was the first time in the world that a combat drone flew in formation with other aircraft. The entire operation lasted 1 hour and 50 minutes and took the patrol out over the Mediterranean to a range of several hundred kilometres.