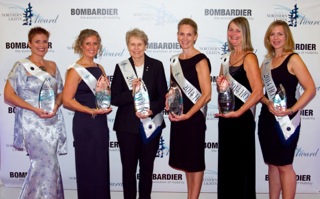 Each year, the national not-for-profit foundation honours outstanding Canadian women in aviation and aerospace who have made significant contributions in their field and are laying the groundwork for other women to soar to new heights.

Joy Parker Blackwood, vice president of the Northern Lights Award Foundation said, “As we celebrate these amazing female leaders, we inspire younger generations of women to consider careers in the aviation and aerospace industry. The legacies of these women will be honoured throughout time, and our outreach efforts within the communities will bring about more visibility, recognition and support that will benefit the program through various other initiatives to ultimately engage a diverse range of talented Canadian women. One young Air Cadet who took part in the celebrations was so impressed with what the award recipients could achieve in the industry that she now knows she wants to be part of it as she works towards her career path.”

The Foundation’s award program, called the Elsie MacGill Northern Lights (EMNL) Awards, is named after aviation pioneer and human rights advocate Elsie Gregory MacGill, who, amongst many accomplishments, was pivotal in the design and production of the Hawker Hurricane in Canada during the Second World War. MacGill served on aeronautical research and regulatory committees for the National Research Council, and of the United Nations. She was the first woman Chair of the United Nations Technical Committee, and drafted the first airworthiness regulations for the International Civil Aviation Organization (ICAO). MacGill was appointed to the Canadian Royal Commission on the Status of Women, and was made an Officer of the Order of Canada.

The evening’s keynote speaker was Dr. Roberta L Bondar, O.C., O. OF ONT., MD, PHD and the world’s first neurologist in space and Canada’s first female astronaut. Bondar captured the audience with her colourful and humorous aviation and aerospace themed stories. Her energy and passion were infectious. “Life for a young girl interested in aviation in the small northern town of Sault Ste. Marie, Ont., felt lonely. I wanted to go into space, and had no female role models to help guide me. We weren’t even allowed to fly in the Air Force.” Bondar mentioned that celebrating the many talented females in the industry would create ambition and determination in our youth to not give up on their dreams.