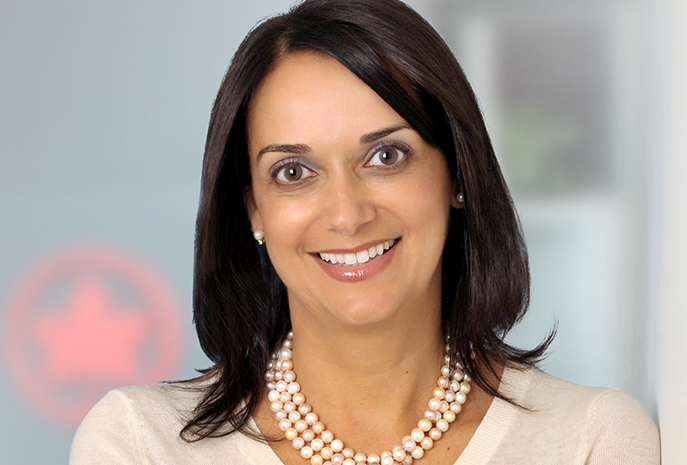 Arielle Meloul-Wechsler, who has been a member of Air Canada's Executive team since 2013, receives the Business Award in the 2022 Northern Lights Aero Foundation’s Elsie MacGill Awards program. (Photo: Air Canada)

The Northern Lights Aero Foundation announced the 2022 recipients of its annual Elsie MacGill Awards, which honour Canadian women who have made outstanding contributions in aviation and aerospace.

“We’re thrilled to be honouring these eight women in aviation and aerospace this year,” said Kathleen Lang, President of the Northern Lights Aero Foundation. “Once again, we received many deserving nominations, indicating the number and calibre of women working in this industry in Canada.”

The Northern Lights Aero Foundation provided the following descriptions of its 2022 recipients, who will be honoured at a gala dinner on October 22, 2022, in Richmond Hill, Ontario.

Business Award – Arielle Meloul-Wechsler
Arielle Meloul-Wechsler is Air Canada’s Executive Vice President, Chief Human Resources Officer and Public Affairs, and has been a member of Air Canada’s Executive team since 2013. She has oversight for all human resources and culture change initiatives across the company, labour relations, labour and litigation legal services, customer service training, as well as internal and external communications, government relations and community investments to support Air Canada’s goal of becoming a Global Champion.

Under Arielle’s leadership, Air Canada has been named for multiple consecutive years, one of Canada’s Top 100 Employers, one of Montreal’s Top Employers, one of Canada’s Top Diversity Employers, in addition to being recognized as one of the Top 10 Most Admired Corporate Cultures in Canada. Arielle also has oversight for both the Air Canada Foundation as well as Air Canada’s CSR Reporting. Arielle was elected President of Airline People Directors’ Council (APDC), an exclusive global Airline HR Leaders’ Network, in March 2017. She was recognized by the Women’s Executive Network in 2019 as of one Canada’s 100 Most Powerful Women in Business in the Corporate Executive category. She is a Member of the Conseil du Patronat, and she also serves on the Board of Directors of the Air Canada Foundation; the National Airlines Council of Canada (NACC), the Canadian American Business Council, and Element Fleet Management Corp.

Education Award – Stéphanie Angrand
Currently an instructor at the Canadian Forces leadership and recruit school in Saint-Jean-sur-Richelieu, Québec, Stéphanie teaches basic training to all new recruits joining the Canadian Armed Forces. Stephanie joined the Canadian Forces in 2006 as an aircraft maintenance engineer. Her first posting was on the CF-18 jets in Cold Lake, Alberta where she worked as an engine technician. She got to travel all over with the jets and feel the power of afterburners with her bare hands. In 2013, she moved on to the civilian world of CRJs 700-900-1000 with Bombardier in Mirabel, Québec. She witnessed the C-series first flight ever and also did some contracting work for Skyservice in Montréal.

In 2015, back with the military, Stéphanie started to work on the CH-146 Griffon helicopters (bell 412) in Saint-Hubert, Montréal. She taught the maintenance type course for three years, which sparked her passion for teaching and mentoring. She continues to teach, mentor, encourage, highlight and help women find their voice and place in this industry. With Alisha Sohpaul, she co-founded Hangar Queens, a corporation soon to become a non-profit. Through instructional capsules, workshops, calls, and social media, she wants to help women thrive and grow in numbers, and turn this 2% of women AMEs into much more.

Engineering Award – Damineh Akhavan, P.Eng., MBA
Damineh Akhavan is a Senior Engineer with more than 17 years of experience in the aerospace industry. Moreover, she is a Founder and CEO of Global Women in STEM Inc. promoting equality for women and equity-deserving groups and challenging the status quo in Science, Technology, Engineering, and Mathematics (STEM) through education, advocacy, and action. Damineh holds a Bachelor of Engineering in Mechanical Engineering, a Bachelor of Science in Physics, and an MBA in International Business from the University of Victoria. She has been an advocate for Equity, Diversity, and Inclusion (EDI) for women in STEM, and a champion for women in engineering, a passion that has grown over the years, especially after becoming a mother. Damineh’s true calling and lifelong goal is to serve her community with long-lasting and sustainable global impact. She’s been involved with local, provincial, federal, and global organizations in mentorship, youth outreach, advocacy, justice, and EDI initiatives for nearly two decades. She has been an active member, contributor, and collaborator with many diverse organizations serving local (University of Victoria, HR MacMillan Space Centre), provincial (Engineers and Geoscientists BC), national (Women in Aerospace Canada, Engineers Canada, Canada Beijing +25 Network, Society for Canadian Women in Science and Technology, Institute for Change Leaders), and global (Engineers Without Borders, NGO CSW/NY) communities.

Flight Operations Award – Kim Winsor
Kim is a third-generation pilot in the Winsor family from St. John’s, Newfoundland. She began her aviation career nearly 30 years ago with Provincial Airlines, initially as a flight instructor before moving on to the airline’s passenger division flying the Metroliners and Saab 340s. Before joining Air Canada in 2007 she also flew for CanJet Airlines in Halifax and Sunwing Airlines in Toronto flying throughout North America and Europe.Kim is currently a training captain on the Boeing 737 Max.

She has also flown the Embraer 190, Airbus 320. Additionally, for the past 12 years Kim has been involved in the training department as a simulator instructor. Her love for flying and aviation continues outside her job. Kim has flown gliders and vintage tail wheel aircraft. In her spare time, she also enjoys sailing and horseback riding. Kim has been actively involved with The Ninety Nines since 1995 and is the Governor for the East Canada Section. She is also a member of Women in Aviation International and The International Society of Women Airline Pilots. Kim enjoys mentoring young aspiring aviators.

Government Award – Gisele Garceau
Gisele Garceau was born in Berthierville, Québec, in a family of 8 children. Although she had no family influence in the aviation industry, she had a dream, to become an astronaut. To achieve that she decided to focus on becoming a pilot and master the instrumentation of a cockpit. As a result, she obtained her pilot licenses in parallel with learning avionics aircraft mechanics.

She started her career with Canadair as the first female avionics mechanics in pre-flight. Four years later she joined Transport Canada rank as the first female airworthiness inspector. In this role, she provided approvals and inspection advice to avionics shops across the country. She became the first woman to hold a Category ‘E’ avionics license for avionics. Gisele is a professional engineer, a commercial pilot and a flight instructor. Her extensive career saw her living in Ottawa and Quebec, where she conducted industry audits and inspections across the region. She spent two years in Hong Kong, studying Mandarin and was active with the French-Canadian Chamber of Commerce in Hong Kong. Gisele was instrumental in writing the new regulations and rules associated with avionics work and licensing at Transport Canada. She is a strong advocate for women in non-traditional roles in the aviation and aerospace industries.

Trailblazer Award – CWO (Chief Warrant Officer) Marlene Shillingford
CWO Marlene Shillingford was born in Newmarket, Ontario and enrolled in the Canadian Armed Forces over 35 years ago as an Aircraft Technician. She graduated from basic occupational training at the Canadian Forces School of Aerospace Technology and Engineering in Borden and started her career on the CT-114 Tutor at CFB Moose Jaw. In November of 1992, Marlene was selected to become the first female technician with the Canadian Forces Snowbirds and in 2006, she was selected to return as the first female Crew Chief. She has served at 8 Air Maintenance Squadron in Trenton, maintaining the CC-130 Hercules and deployed to South West Asia. She instructed future junior leaders at the RCAF Academy in Borden and was posted to the NATO Airborne Early Warning & Control Force in Geilenkirchen, Germany, deploying with NATO as the Detachment Chief in Afghanistan.

Marlene served at the Canadian Forces (Joint) Warfare Centre in Ottawa, completed the Officer Professional Military Education program and in 2014 was invested into the Order of Military Merit by the Governor General of Canada. She was promoted to her current rank in 2017 and was selected as the 12 Air Maintenance Squadron CWO in Shearwater, Nova Scotia and was then appointed as the 15 Wing CWO, returning to Moose Jaw. Marlene is a mentor for Elevate Aviation and last year, she was appointed as the Division CWO at 2 Canadian Air Division in Winnipeg.

Rising Star Award – Donya Naz Divsalar
Donya obtained her BSc. Honours degree from Simon Fraser University in Health Sciences in 2019 and is currently a Master of Sciences Candidate with the Aerospace Physiology Laboratory at SFU. Prior to immigrating to Canada in 2014, Donya attended Debrecen Medical School in Hungary. She is an ambassador for the Canadian Space Agency as well as the founder of SFU Aerospace; an organization that bridges the gaps in education, technology and entrepreneurship and aims to provide technical aerospace education to non-technical students.

Donya also spends her time as the science lead and payload developer of SFU Satellite Design team to bring science and CubeSat technology together by designing unique biological and biomedical payloads. She is currently working on ALEASAT, a student-made 1U CubeSat that is projected to launch in 2022. In 2019, Donya was selected as one of the Top 25 under 25 winners of Surrey Board of Trade for her work in fostering aerospace on the west coast of Canada. Donya is the founder and CEO of Caidin Biotechnologies, a start-up company that aims to improve human health and performance in extreme environments through biomedical advancements. Donya’s work will directly contribute to preserving and improving astronaut health during Lunar and Martian missions and deep space exploration.

Rising Star Award – Zainab Azim
Zainab Azim is a UNOOSA Space4Women Mentor dedicated to empowering young girls and women interested in pursuing space and STEAM fields. She is the world’s youngest Future Astronaut set to fly with Virgin Galactic, allowing her to fulfill her dream of exploring space while creating access to opportunities through her mentorship and advocacy work in order for young women to fulfill their own. She continues to use her platform to inspire and mobilize the global community as a speaker and panelist at international forums, including the inaugural UN World Space Forum in Austria and the Space Girls Space Women Exhibition to promote the cause of Access to Space for All through education and space-based solutions.

She is the Founder of GIVE (Global Initiative and Vision for Education), an organization that works towards providing access to quality education in addition to innovating a holistic 21st century educational model based on neuroscience and psychology research to foster the creativity, curiosity, character, and innovation needed for solving the issues facing our planet. Zainab is also a student at the University of Toronto where she volunteers as a Research Assistant at the Ontario Institute for Studies in Education. She is currently working at the House of Commons of Canada to improve Diversity, Equity, and Inclusion.