The National Research Council Canada (NRC) is pleased to announce the acquisition of an Extra 300 aircraft as a platform for aeromedical research at its Flight Research Laboratory. 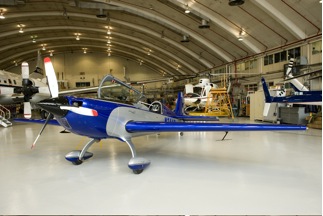 The National Research Council Canada (NRC) is pleased to announce the acquisition of an Extra 300 aircraft as a platform for aeromedical research at its Flight Research Laboratory.  They chose the aircraft for its proven aerobatic performance, easy handling and dependable stability.

“Aeromedicine is an increasingly important field in flight research,” says Stewart Baillie, Director of the Flight Research Laboratory at the NRC Institute for Aerospace Research (NRC-IAR).  “Using the Extra, we intend to look at the physiological and psychological effects of flight in high-performance aircraft, which are largely unexplored at sustained accelerations above 4 g.”

The “cognitive cockpit” is another potential area for research, which would focus on designing an adaptive cockpit that provides the pilot with information as it is required in changing situations.  This research will involve neuroimaging techniques to “read the pilot’s mind” in the flight environment, based on the timing, intensity and location of brain activity.

With room for a pilot and a safety pilot, the Extra 300 can do plus or minus 10 g (depending on the weight of the research instrumentation) with full aerobatic agility. The Extra is also expected to be less expensive to operate compared with other aircraft in the NRC fleet, making it suitable for supplemental use in supporting general aviation research, training and evaluation.

Designed by Germany’s Walter Extra for aerobatic instruction and display, the Extra 300 has a six-cylinder, 300 hp engine. Its fuselage and wing structures are manufactured with carbon composite materials to minimize weight and maximize strength for withstanding high-g manoeuvres.

The NRC-IAR Flight Research Laboratory develops, maintains and operates a small fleet of dedicated research aircraft, including a Falcon 20, a Convair 580, a Harvard Mark IV, a T-33, a Twin Otter, a Bell 412, a Bell 205A and a Bell 206. Researchers use these aircraft to support projects in the lab’s main program areas: flight mechanics, avionics and airborne research experimentation.

For over 50 years, NRC has helped Canada adapt to the changing needs of the aerospace industry and gain world leadership in niche markets, such as regional and commuter aircraft, civilian helicopters, and small gas turbine engines.