How do you get all the advantages of a P-8A Poseidon mission system without footing the bill for a US$170 million maritime patrol aircraft? 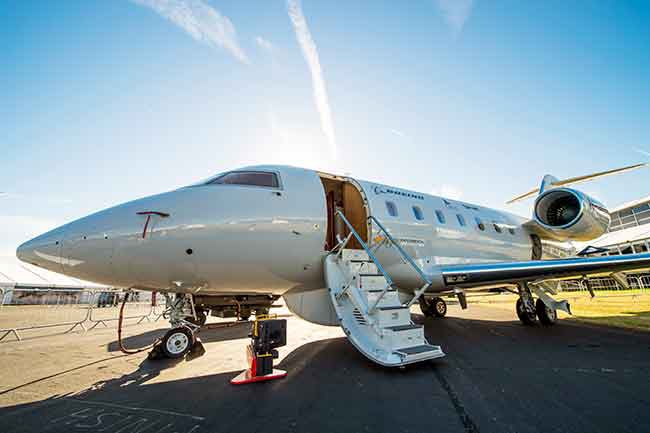 Shrink the plane and drop the weapons.

Make no mistake, Boeing is still seeking foreign sales for the P-8A, a multi-mission maritime aircraft based on a 737 airframe. But for countries requiring all-domain ISR capability without anti-submarine warfare (ASW) systems, the company has developed a lower cost alternative: the Maritime Surveillance Aircraft, or MSA.

The MSA is a Bombardier Challenger 605 or 650 structurally modified and reconfigured by Field Aviation of Toronto. But it comes with many of the bells and whistles of a Poseidon.

“You are basically benefiting from the huge investment the U.S. Navy and Boeing have made in the P-8 mission systems as well as AWACS,” said Jim Barnes, director of business development in Canada for Boeing Defense, Space and Security. “You are putting that in a smaller platform. So for countries that just need ISR capability – that don’t need the ASW – this platform is great.”

First unveiled as a concept at the 2012 Farnborough Air Show, the MSA has rapidly progressed to a demonstrator aircraft – a Challenger 604 that was previously the private jet of recently retired Boeing CEO James McNerney. Boeing conducted the first flight on February 28, 2014, and the plane has since been performing technology demonstrations to potential customers worldwide.

“In less than three years we went from concept to completion for the demonstrator aircraft,” Matt Carreon, head of global sales and marketing for Boeing Military Aircraft, explained during a recent stop in Ottawa. “This is not a prototype, this is a fully missionized aircraft that can do the mission tomorrow.”

The Canadian content is no accident. Carreon, a former P-3 Orion tactical navigator, says  Boeing “defined the mission” before identifying the aircraft. “We came up with the Challenger based on its capability, payload, size, weight and power – key characteristics when you are adding sensors. We did a full trade analysis on the Bombardier aircraft.”

Not only is it the “largest selling midsized business jet on the market,” the Challenger offers “growth capacity” to accept more sensor capability and the flexibility to adjust to other mission requirements, he added. “[It] has the added benefit of being easily reconfigurable from an ISR platform to a transport or medevac role. Even after we have added all these sensors and the mission system and the crew stations, there is still room for growth on this aircraft – additional sensors based on customer requirements.”

Brian Love, Field’s chief commercial officer, said the conversion model is one the Toronto company has been using “successfully for the last 40 years. We are a big believer in the market, in the model, and obviously in Boeing as a partner.”

The structural modifications range from the tail cone to ESM antenna, a retractable EO/IR camera and an underbelly radome, and were designed to ensure the aircraft could accept whatever sensors, radar, camera and other system the customer requires. Love said the alterations were designed by Boeing or Field Aviation and then adapted for the aircraft by Field, a process he jokingly equated to “sleeping with an elephant.”

“Our two engineering teams worked extremely well together,” he said. “Boeing was willing to learn from us in some areas and certainly we learned a lot from them.”

Love said the modifications involved about 30,000 man-hours per aircraft and the company would have to consider expanding its workforce if there is high demand for the MSA.

Having spent a significant amount of his U.S. Air Force career on surveillance missions over land and sea, Carreon believes the MSA is an “innovative concept” ideally suited for the tasks of tomorrow’s ISR operations. With an endurance of eight to nine hours, depending on mission profile, he sees the aircraft as a perfect fit for South East Asia where monitoring the vast array of maritime traffic is a critical requirement. Arctic nations, too, could incorporate a range of sensors, including oil slick detection, to monitor increased traffic.

To date, however, much of the early interest has come from Eastern Europe where countries are looking to strengthen overland and border ISR capability.

As a Canadian built and modified aircraft, Boeing is also hoping to acquire a customer in the Royal Canadian Air Force. Boeing still aims to eventually sell Canada on the P-8, so there is no intent to replace the CP-140 maritime patrol aircraft with an MSA. Rather, Carreon believes there is a complimentary role for the Challenger to help extend the operational life of the Aurora fleet.

“Anyway we can support [DND’s] plan for the CP-140, we will,” he said in an interview at CANSEC, noting that the air force now plans to keep the Auroras flying until 2030. “The MSA could be a solution by either offsetting their flight hours or reducing the flight hour stress on the CP-140.”

In July, he added that Boeing had spoken with both the RCAF and Special Operations Forces Command about the “mission capability” of the MSA. (SOFCOM, through National Defence, has since September 2013 been seeking a multi-sensor manned airborne ISR capability known as the MAISR project. However, in a notice posted on July 8, DND confirmed its interest in the competitive procurement of a modified Beechcraft King Air 350ER platform.

Carreon said offsetting some CP-140 missions with an MSA could save the RCAF more than $2.5 billion over the next 10 years, according Boeing’s analysis. The cost per flight hour of a CP-140 is about $19,000 while the Challenger 604 is roughly $4,500, he noted. “It is a very cost effective aircraft.”

The Royal Australian Air Force operates both CP-140s and Dash-8s for coastal patrol and is now acquiring four Challengers “into a similar program,” Love observed. “The cost analysis on the CP-140 versus the Dash 8 is something like 3.90 per square nautical mile patrolled versus 31 cents, including the acquisition costs of the aircraft.”

And as a business jet with a global commercial market, its maintenance costs are significantly less than a military aircraft.

If the Challenger has a unique selling feature, John Verniest says it is the aircraft’s reliability. Seated in the demonstrator’s cockpit on the tarmac in Ottawa, the lead test pilot on the MSA program glances across the apron at an RCAF Challenger parked nearby.

“In talking to [their pilots], they have a 99.7 rate of being able to meet their sorties,” he says of the Bombardier VIP transport aircraft. “We have been flying [this MSA demonstrator] for just about two years now and the only thing we have replaced on it is a fuel boost pump. It is a super airplane, and that is coming from a guy who wears a Boeing flight suit.”

That reputation for reliability is only going to improve with the use of a Challenger 605 or 650 for the actual MSA, he added, noting a range of avionics upgrades such as the Rockwell Collins Pro Line 21 integrated flight deck and a tablet-accessible mission system that will be on the final aircraft.

With high demand for enhanced ISR capability, Boeing believes it has struck on a solution that meets the needs of many countries for maritime and land operations without the high operating costs of larger aircraft. And it is ready to entre operations tomorrow. The question is, is Canada buying?

Cream of the Crop
Earlier this spring, Boeing recognized six Canadian suppliers in its annual Boeing Performance Excellence Awards (BPEA) program for 2015. With approximately 600 suppliers across the country, Canada is one of the largest international supplier bases for Boeing.

“BPEA winners – roughly four per cent of our supply chain – are among the best aerospace suppliers the world has to offer, and Canadian companies are regularly among our top achievers,” noted Jim Barnes, Boeing Defense, Space and Security director of global marketing for Canada. “Our Canadian suppliers and partners are critical to our efforts to address the needs, not just of Canadian customers, but of customers around the world.”

Apex Industries of Moncton, N.B., received a gold award for providing products and services to Boeing that meet or exceed lofty performance targets for quality, delivery, cost and other areas.