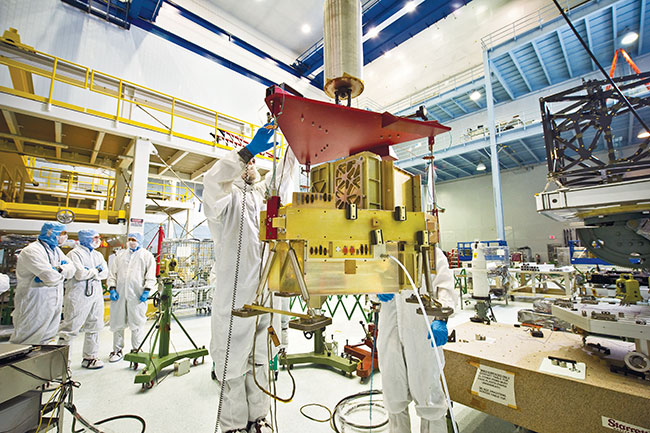 The closest exoplanet to us, Proxima Centauri b, is 4.2 light years away, or 265,000 times the distance between the Earth and the sun. To the naked eye, the planets in our solar system appear as bright spots. Using a telescope, these dots stand out from the stars and reveal structures like Jupiter’s Great Red Spot, Saturn’s rings, or the ice caps of Mars.

Although the presence of such phenomena is expected on exoplanets, their distance from the Earth prevents us from directly resolving their surfaces. Nevertheless, there are ways to learn more about the structure of their atmospheres. I am a PhD student in astrophysics at the University of Montreal. My work is related to the characterization of exoplanet atmospheres. More specifically, my research focuses on the development of tools to map the atmosphere of exoplanets using observations from the James Webb Space Telescope.

The majority of exoplanets are detected using indirect methods, primarily observing the effect of the planet’s presence on the light emitted by its star. The transit method has led to the greatest number of exoplanet detections. A transit occurs when an exoplanet passes in front of its host star, which means light from the star decreases as its surface is partially obscured. Light is divided into a spectrum of wavelengths that correspond to different colours. When a transit is observed at several wavelengths, it is possible to measure the atmospheric composition of the exoplanet. For example, water molecules strongly absorb light in the infrared wavelengths, making the planet appear larger, since its atmosphere blocks a larger fraction of the light from its star. In a similar way, it is possible to measure temperature of the atmosphere and to detect the presence of clouds.

In addition, a transiting planet can also pass behind its star. This phenomenon, in which only the light from the star is observed, is called secondary eclipse. By observing this, it is possible to isolate the light coming only from the planet and thus obtain additional information about its atmosphere. The transit method is more sensitive to the presence of clouds, while secondary eclipse provides more information about the temperature of the atmosphere.

In general, the atmosphere of an exoplanet is considered a one-dimensional object when analyzing it. That is, its composition and temperature are considered to vary only with altitude and not with its position in longitude and latitude. To take these three dimensions into account simultaneously would require complex models and observational accuracy. But solely considering altitude may produce approximations that are not valid. On Earth, for example, the temperature at the equator is much higher than at the poles.

Although it is impossible to observe the surface of an exoplanet directly, it is possible to measure the spatial variation of the atmosphere using two methods: phase curve analysis and secondary eclipse mapping.

The phase curve is the variation of light from the star-planet system during a period of revolution. Since the planet rotates on itself during its orbit, different sections of its atmosphere are successively visible to us. From this signal, it is possible to map the intensity of the light emitted by the planet in longitude. In the case of hot Jupiters, whose day side is generally hotter, the maximum of light from the planet is near the secondary eclipse. Similarly, the minimum of the curve is near the transit, since it is then the night side that is observed. In secondary eclipse mapping, the day side of the exoplanet is resolved. As the planet moves in and out from behind its star from our point of view, sections of it are hidden, allowing us to isolate the light emitted by a given section of its atmosphere. By measuring the amount of light emitted by each individual section, it is then possible to map the day side of the atmosphere against longitude and latitude.

To date, phase curve analysis has been applied to several planets using space telescopes, including Hubble, Kepler and TESS. Secondary eclipse mapping has only been applied to one exoplanet, Hot Jupiter HD189733 b, from observations with the Spitzer space telescope. However, these observations are usually made at a single wavelength, and don’t provide a complete picture of the atmospheric processes at work on these exoplanets.

With a 6.5-metre mirror, compared to the Hubble’s 2.4-metre mirror, the Webb telescope will provide unprecedentedly precise observations over a wide range of wavelengths. Four instruments, including Canada’s NIRISS (Near-infrared Imager and Slitless Spectrograph), will observe in the infrared range and characterize the atmospheres of a multitude of exoplanets.With the Webb telescope, it will be possible to apply the mapping methods available to us to measure the three-dimensional variation of exoplanet atmospheres. These measurements will allow us to deepen our knowledge of atmospheric processes.

This article was originally published by The Conversation.