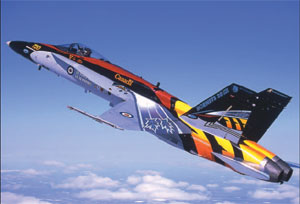 In stark contrast to the usually excoriating stuff in her various
reports to Parliament, Auditor General Sheila Fraser has given The
Boeing Company what amounts to a thumbs-up for its CF-18 modernization
program.

A
total of 138 CF-18s were ordered from McDonnell Douglas in 1980, two
years after the Department of National Defence had narrowed down the
contract to replace its CF- 100 Canuck and CF-101 Voodoo interceptors
to the M-D aircraft and the General Dynamics F-16 Falcon. The
$2.34-billion contract, the largest military purchase in CF history,
saw first delivery in 1982 and Canadian pilots quickly distinguished
themselves with their new aircraft in head-to-head competition with
many of their allies.

But the rapid march of digital technology
meant that many of the CF-18 systems, state-of-the-art when the
aircraft was designed in the late 1970s, were soon deficient. That
prompted DND to announce plans for a midlife update in 1992 but federal
budget cuts under then prime pinister Jean Chrétien meant it was 2001
before Treasury Board approved funding for the core avionics Phase 1 of
the CF-18 modernization.

Eighty aircraft were designated for the
upgrade, with up to 41 others to be declared surplus. Most ostensibly
would be designated for sale to NATO allies – subject to US approval
because some ‘controlled’ technologies are involved – and some held in
reserve. The Czech Republic had been interested in 14 of the surplus
Canadian aircraft but Sweden scotched that by offering new Saab JAS-39
Gripens at what are understood to have been fire-sale prices.

To
date, 40 upgraded CF- 18s have been delivered to the Canadian Forces
through Phase 1, which is due for completion in 2006 at the rate of two
aircraft a month. It includes better radios and radar as well as an
improved weapons management system and a beyond-visual-range
friend-or-foe interrogator. Canada has benefited from work already done
by Boeing on US Navy and Royal Australian Air Force aircraft. New
operational flight program software runs the upgraded navigation and
weapons delivery computers.

“National Defence . . . has been
able to meet its own target to deliver two squadrons of Phase 1
upgraded aircraft that are capable of performing North American
Aerospace Defense Command (NORAD) roles,” Fraser’s report says.

Tactical
Squadrons 416 and 441, part of 4 Wing at CFB Cold Lake, are fully
equipped with the upgraded aircraft but 410 Operational Training
Squadron isn’t scheduled to take delivery of its aircraft until next
fall. Meanwhile, the first upgraded CF-18s are arriving at 3 Wing in
Bagotville, home to 425 and 433 Tactical Squadrons.

Boeing’s
vice-president for Canada, Al DeQuetteville, who wound up a 37- year
military career as Chief of the Air Staff in 1998, said the pilots are
“pleased as punch” with the improved platform. While the operational
envelope hasn’t changed, the new contents have made the Canadian
fighter the equal of anything else out there.

“She was quite
laudatory,” DeQuetteville said of Fraser with a chuckle. “We couldn’t
have been happier with her report. The program is on time, on budget.”
He also pointed out something that wasn’t in the report: Boeing has
discharged about 60% of its industrial offsets in the first three years
of a seven-year program.

But DeQuetteville said that “probably
most important, as an aviator, is to know that the operators are
absolutely ecstatic and that Col. Duffy Sullivan, the commanding
officer at 4 Wing, is more than pleased with how the upgraded aircraft
are performing.

Maj. Jason Regenwetter, 416 operations officer
and lead test pilot on the upgraded aircraft, agreed wholeheartedly.
“This takes us . . . not necessarily into the future but back up to
date with current technology,” he said. “The radar upgrade alone has
made our air defence role, either for NORAD or any potential taskings
for combat air patrols and whatnot, so much easier. It’s a lot more
reliable and the detection, ranges and capabilities of the radar are
leaps and bounds over where we were.”

The new radar is a
Raytheon APG-73 follow-on to the original APG-65. It’s standard on the
C and subsequent models and while it’s also in the E-model Super
Hornet, it will eventually be replaced with phased-array radar.

Having
accumulated 2,600 hours on CF-18s since 1993, Regenwetter has been
involved in the upgrade from when two prototypes were put through their
paces at at the US Naval Air Weapons Station in China Lake, California.
He said the Phase 1 improvements have yielded “monumental” changes in
the CF-18’s already formidable mission capability. “And because we’ve
upgraded the mission computers, we were able to upgrade the core
software, so everything about the airplane just works that much better.”

The
original CF-18 computers have been likened to Commodore 64s whereas the
new ones are a Pentium III level of technology. “It’s certainly not top
of the line by any stretch,” Regenwetter conceded. “But the capability
increase certainly has brought us back into the game, on par with our
allies. There are better platforms out there, the brand-new platforms,
but if you base-line what is available across NATO, we’re right up
there with the leaders of the pack again.”

Converting to the
upgraded aircraft is relatively straightforward: about a week of ground
school, several simulator missions, a dual checkride and then a solo
dedicated checkride. “It’s just getting used to the different
displays,” he said. “There is more information presented but it is very
logical and easy to interpret. It’s really well thought out.”

Once
the final 40 Phase 1 upgrades are completed, Phase 2, which will boost
the overall modernization bill to $2.6 billion, is scheduled to begin
almost immediately. That would involve installation of a radar warning
receiver, a data link, electronic countermeasures and a missile
approach warning as well as a helmetmounted sight. Even farther out on
the horizon, as DND foresees the CF-18 remaining in service until at
least 2017, are stealth enhancements. When the original CF-18 contract
was signed with McDonnell Douglas in 1980, the operational lifespan ran
no later than 2003.

“There aren’t a whole lot of good-news
procurement stories around these days,” DeQuetteville said, adding that
Boeing and the federal government are enmeshed in the Phase 2
negotiations. “It bodes well to have established our credibility in
Phase 1,” he said. “We have a very happy customer.”

If there was
a negative note in the auditor general’s report, it was about the
government’s commitment to long-term support for defence programs. “In
Phase 1, we found some problems with project and risk management, staff
shortages, and approval delays. These concerns need to be addressed so
that they do not become impediments to the successful completion of
Phase 2. If they aren’t addressed, the final delivery of fully upgraded
CF- 18s could be delayed beyond 2009. The current CF-18 airframe has a
limited amount of flying hours left, so the department needs to take
full advantage of its investment in the modernization by ensuring
upgrades are installed and available to pilots as soon as possible.”

Then
there’s the question of whether there will be enough pilots. Due to
shortages last year, the Air Force wasn’t able to use all available
CF-18 flying hours. It currently caps annual flying hours at 182.7 per
pilot, which is considered enough to maintain proficiency for
mediumthreat scenarios compared with 240 hours required to train for
high-threat scenarios. New simulators which are supposed to come into
service this year are expected to improve the situation but Fraser’s
report says DND clearly needs more pilots. “Shortages are felt
particularly at the training units, which often suffer first when there
are not enough experienced pilots for both squadron operations and
training unit demands,” she said, citing a DND internal assessment that
available funds will only cover about 65 per cent of stated needs by
2007-08. “This may introduce uncertainty and volatility in the
department’s ability to maintain and continue flying the CF-18s to meet
operational commitments.”