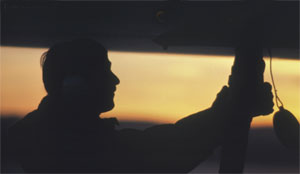 Industry braces for oil-price shock
It
could not have come at a worse time. Surging oil prices may not be
enough to knock an industry recovery off course, but the latest spike
in the cost of crude may sink growth projections by at least a point or
two.

In May, the price of a barrel of crude oil hit levels not
seen since the start of the first Iraq war 14 years ago. The reasons
for the increase are varied and have more to do with speculation and
consumption in the US and China than with the Organization of Petroleum
Exporting Countries’ controlling hand on the spigot. Despite noises to
the contrary, OPEC is pumping oil at near full tilt, suggesting that
current pricing may be more than a short-lived summer phenomenon.
Whatever the global reasons for the recent jump in fuel costs it will
be local operators already bruised by higher insurance premiums, rising
airport fees and last year’s round of avfuel hikes that will pay the
price. For now, FBOs appear to be shielding customers from taking a
full front-on hit by holding the line on price increases. Still, as the
cost goes up there is less room to manoeuvre.

Even so, not all
operators will be hit the same way. Newer aircraft with greater fuel
capacity are giving owners the option to ‘tanker’, meaning they will be
more selective about where and when to buy. “Shopping is becoming a
factor,” said one source. “An FBO may be the only game in town at their
airport – but they may have to deal with a competitive influence from
another field.”

The PW610F is the smallest
member of the new-generation PW600F family of turbofan engines in the
900- to 3,000- pound thrust category. The engines are aimed at the
entrylevel jet and turboprop market. The more powerful PW615F, chosen
by Cessna to power its Citation Mustang, achieved its first test flight
aboard the P&WC flying test bed in April. The PW610F achieved its
rated takeoff thrust of 900 pounds five hours into the test run, and
will be transferred to the flying test bed in August.

“The
ability to achieve takeoff thrust during the first run is an example of
how well the program is progressing,” said Vern Raburn, president and
CEO of Eclipse Aviation. The first of the PW610F prototypes will be
delivered to the Eclipse plant in Albuquerque, New Mexico in early
December. Test flying of a PW610F-powered Eclipse 500 is scheduled to
begin on December 31, with certification of the Very Light Jet (VLJ)
expected in the first quarter of 2006. The manufacturer reports that
the order book for the Eclipse 500 exceeds 2,000 aircraft.