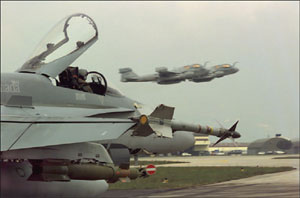 KELOWNA FLIGHTCRAFT POCKETS $1.77- BILLION TRAINING CONTRACT
Kelowna
Flightcraft has been selected by the Canadian government to operate the
new Canadian Forces Contracted Flying Training and Support (CFTS)
service program. Based in Southport near Portage La Prairie, Manitoba,
Kelowna Flightcraft will lead a team of Canadian companies collectively
known as Allied Wings to provide flight training and support services
to the Canadian Forces over a 22-year period.

Allied Wings,
which includes Canadian Helicopters, Atlantis Systems (simulators and
other training devices), Canadian Base Operators (support services) and
Coastal Pacific Aviation went head-to-head with Bombardier for the
$1.77-billion contract. Bombardier has disputed the outcome, causing
some observers to call the contract ‘revenge of the west’, a reference
to the 1980s when Bombardier trumped a superior bid by Winnipeg-based
Bristol Aerospace to overhaul Canadian Forces CF18s.

But that
ignores Allied Wings’ ability to carry out the contract. The Allied
Wings consortium has over 3,000 full-time employees in 35 locations
across Canada. It operates over 200 fixed- and rotary-wing aircraft and
three advanced training schools that train more than 500 pilots a year.
Allied Wings also operates a number of major US military bases on a
‘performance incentive fee’ basis.

BOMBARDIER TO OFFER NEXT GENERATION REGIONAL JET TO CUSTOMERS
Bombardier’s
board of directors has granted the manufacturer authority to offer the
proposed CSeries family of aircraft to customers. The authority to
offer is seen as an important step in the process that could lead to
the aircraft program launch. Prior to launch, Bombardier will seek firm
commitments from potential customers, suppliers and government partners.

“In
the CSeries status report presented to board members, Bombardier
Aerospace demonstrated the significant progress made in the evaluation
of the aircraft configuration and performance, the strong market
interest for the CSeries family as well as the overall business plan,”
said Pierre Beaudoin, president and COO of Bombardier Aerospace. “We
will now offer sales proposals to potential customers and finalize
sales and partnership commitments before returning to the board to
request program launch and recommend the final assembly site location.”

In
a move that some analysts believe is intended to clear a path for the
next generation passenger jet, Bombardier has suspended its annual
dividend to family members for the first time in more than 20 years.
The dividend has provided a steady source of income for the family, but
is now needed to conserve cash.

BOMBARDIER CUTS DELIVERY TIME FOR AOG PARTS
Bombardier
Aerospace has launched a new high priority parts delivery program aimed
at getting aircraft-on-ground (AOG) parts to North American business
aircraft operators within 12 hours. The manufacturer reports that
preliminary results indicate that the initiative is already delivering
parts for all Bombardier aircraft in less than 12 hours from when the
order is taken.

By
centralizing all AOG parts deliveries with Expeditors International, a
global freight forwarder with 170 offices worldwide, Bombardier is also
providing customers with improved Web-based tracking and tracing
capability. In addition, AOG orders are now routinely ready for
shipping within 90 minutes of receiving a customer’s request.