Features Operations
One on One: Alex Arychuk 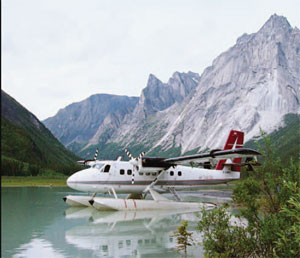 AIR TINDI BEGAN OPERATIONS ON NOV. 1, 1988, WITH JUST FOUR AIRCRAFT AND
EIGHT EMPLOYEES IN YELLOWKNIFE. WHAT KIND OF A JOURNEY HAS IT BEEN TO
TODAY’S WORKFORCE OF 160 EMPLOYEES IN PEAK SEASON? IS AIR TINDI NOW THE
LARGEST CHARTER AIRLINE IN NORTHERN CANADA?
It’s
been a fun one, without a doubt. There are a couple of equals – Kenn
Borek Air has been around longer, and is throughout the whole Arctic,
but not headquartered in the Territories. I never noticed it as hard
work, it’s just what we do.

HOW MANY AIRCRAFT DO YOU OPERATE, AND WHAT TYPES? WHAT ABOUT FLEET EXPANSION?
We
operate 24 airplanes, and we run from a Cessna 185 with three
passengers to three Dash 7s carrying 46 passengers. The way the
aircraft is built, the last four seats were aft-facing. To run them as
combis, it was a necessity to remove them each time, so we elected to
leave them out and run the Dash 7s with 46 seats. In the short term we
are looking at a brand new Caravan coming onboard, and with all the
contracts that are out for tender right now we’re waiting to see.

IS THERE ONE PARTICULAR AREA OF THE NWT WHERE YOU HAVE FOCUSED YOUR OPERATIONS?
We
do look at the entire North, but our focus is truly a 500-mile radius
from Yellowknife. That has been our forte, to stay here and try and
capture what we have in our own backyard. With the start of the diamond
rush in ’94 to today, staying focused and trying to meet the demands of
our clientele at home has been key. We’ve done OK by staying home and
not trying to be in 20 different communities.

AIR TINDI IS VERY MUCH A FAMILYRUN COMPANY. WHAT ROLES DO ARYCHUK FAMILY MEMBERS PLAY?
There
are four Arychuk owners, two families. Peter and Teri: Peter does the
marketing, he’s the vice-president of marketing, and Teri is our
operations manager. Sheila looks after the accounting, she’s executive
vice-president of finance, our CFO. I’m the president and director of
maintenance. The jobs are well shared out. From previous companies that
I’ve worked for, where one man carried everything, they burned out in
10 years. We’ve got it split up in four.

BY THE SUMMER OF 1992
AIR TINDI OPERATED FOUR DHC-6 TWIN OTTERS ON FLOATS AND HAD BECOME THE
LARGEST FLOAT PLANE OPERATOR IN NORTHERN CANADA. IS THIS STILL THE CASE?
We
still are. It’s been good for us. We will run four Twin Otters again
this summer, and we have the Caravan and the single Otter to go along
with them, plus a couple of 185s. The float side of the company is a
very important part of the operation – it’s the butter on the bread.
The Twin Otter on floats is the ultimate bush plane.

HOW DOES YOUR CUSTOMER PROFILE DIFFER FROM CANADA’S MAJOR OR REGIONAL AIRLINES?
I
think the customer profile is quite similar across the country. There’s
a phenomenal amount of hunting, fishing and trapping customers. The
tourist side seems to be a shrinking industry – right now the Japanese
aren’t coming, they’re heading to Alaska. It does make it appear as
though we’re in a diminishing tourist section at this time. But with
every downturn there’s an upswing, and I think we can feel and sense
that mining is back in a big way. The precious-metals prices are up,
and we’re looking for uranium and gold again. So with one downswing
there’s another swing up.

AIR TINDI RECORDED SOME MAJOR
MILESTONES DURING THE PAST YEAR INCLUDING THE ADDITION OF SEVERAL
DIFFERENT AIRCRAFT. WHAT WERE THE AIRCRAFT ADDED TO YOUR FLEET, AND
WHAT HAS THEIR ADDITION MEANT TO AIR TINDI?
For the airplanes,
we bought First Air’s last 300 series Twin Otter, and we brought on
NWI’s Cessna Citation. It moved us from about 130 to 160 people. For
Yellowknife, we have 165 jobs here.

AIR TINDI IS A LOCALLY OWNED AIRLINE. WHAT UNIQUE QUALITIES AND STRENGTHS DO YOU FEEL THIS BRINGS?
It’s
a fact that we we’re all born and raised here. My brothers and I grew
up on the highway, which gave us access to all the people who were
coming and going out of Yellowknife, and the benefit and the knowledge
of the friendships of our father and mother from the business that he
ran in Fort Providence. We had people who when we started said “we’ll
give you a try, because your father was good to me.” So we had some
ground hoed for us when we started.

I have to credit the
employees that have stayed as long as they have. We’re close to a
10-year tenure with our people, and there are many who have been with
us for 15 years and longer. They’re what build the company, and they’re
the people we’ve got to look after and continue to grow with.

AIR TINDI IS INVOLVED IN TWO JOINT AIRLINE VENTURES, TLI CHO AIR AND AQSAQNIQ AIRWAYS. WHY?
Tli
Cho Air was originally set as an “anchor” for Air Tindi. I’ve been in
the industry since 1973, and the only thing that’s been truly
consistent is those people. Do we take forever, or do we share? And I
decided that we share. And to do that, we joint-ventured with the
locals. Aqsaqniq Air was started with the same principle in mind – we
are all students of Akaitcho Hall, and all those lads that we partnered
with are also students of Akaitcho Hall. It just seemed like a natural
fit, it gave us local representation in the communities with people we
already knew.

WHAT ROLE DOES AIR TINDI PLAY IN AIR AMBULANCE/MEDEVAC SERVICES?
Our
medevac service is one we’ve been building on. I was a volunteer with
the fire department for 11 years and the ambulance was part of it, and
it was a natural fit for us to continue to pursue air ambulance. We are
the dedicated carrier for the Northwest Territories. We work in
conjunction with Aklak Air out of Inuvik, and theoretically there could
be a third partnership. We’ve been partnering together for the last
five years. It’s a singlesource contract awarded to Air Tindi, and
Aklak represents us in Inuvik. We run dedicated King Air 200s both in
Yellowknife and Inuvik, and for Yellowknife we have two dedicated
airplanes. One is set up with a Lifeport tandem stretcher kit, and the
second is an aircraft with a large door, which is ideal for back
injuries, pregnancies, etc. It’s well suited for the job, and we run a
third one that stands by as a dedicated aircraft, also with a single
med kit. The Citation is equipped as a fourth airplane to fit into the
fleet; it also has a Lifeport med kit. We hope to be doing it for the
next 15 years. But it’s a job that people often don’t understand – most
of it is at night, it’s in the dark. It’s a different type of work.

DO YOU SEE AIR TINDI EXPANDING ACROSS CANADA?
We
operate within a 500-mile range, mostly of Yellowknife. In the
immediate future, no. As I keep telling everybody here, there are 100
airplanes that we don’t operate. We’ve got lots of room for growth.