WESTJET IS CELEBRATING 10 EXTREMELY SUCCESSFUL YEARS SINCE ITS 1996 LAUNCH. 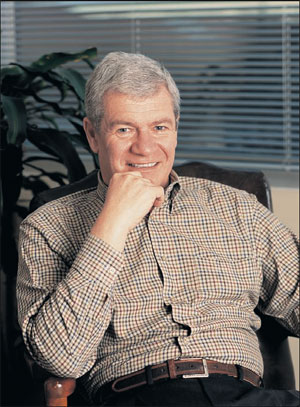 WESTJET IS CELEBRATING 10 EXTREMELY SUCCESSFUL YEARS SINCE ITS 1996
LAUNCH. IT HAS FLOWN OVER 44 MILLION PASSENGERS AND GROWN TO OVER 50
B737 NEXT-GENERATION AIRCRAFT AND OVER 5,000 EMPLOYEES. WHAT KIND OF A
JOURNEY HAS IT BEEN FOR YOU?
There’s
no question, it’s been a very exciting and stimulating journey.
Probably the most rewarding part is seeing how our team has grown and
developed and matured and shown their ability to take on the new
challenges that come with being a large corporation. After a while it
(the process of physically growing the airline) becomes fairly
mechanical; we started taking 5 or 6 airplanes every year, gradually
building that up to 8 to 10.

We now take them, a group of
airplanes, and I’m not even sure it’s just occurred. So it becomes, I
wouldn’t say “ho-hum,” but it certainly becomes a very standardized
process. I now spend more of my time thinking about the bigger picture
and longer term than I do thinking about the dayto- day or week-to-week
operations of the company.

I think it (the current industry
situation) is looking pretty good – we’ve got a relatively healthy
duopoly existing with two of the biggest carriers in Canada. I don’t
think that’s likely to change much over the next few years. Although we
suffer today from the high price of fuel, what most people don’t
appreciate is that the increase in the price of fuel strengthens the
Canadian dollar, which gives us a significant offset to the escalating
price of fuel. So it’s sort of like a circular argument in a way. It’s
not nearly the detriment to us that the US carriers are feeling, the
escalation to the fuel prices.

YOU NOW OFFER SCHEDULED SERVICE
TO 34 CITIES IN CANADA AND THE US PLUS CHARTER OPERATIONS TO 24 CITIES
IN THE US, MEXICO AND THE CARIBBEAN; WHEN YOU STARTED IN FEBRUARY 1996
YOU FLEW JUST TO CALGARY, EDMONTON, KELOWNA, VANCOUVER AND WINNIPEG….
We now fly 305 flights a day, and we started out flying with just 12. So it’s a huge change.

YOUR
FLEET NOW INCLUDES B737-600s, 700s AND 800s, THE NEWEST FLEET OF ANY
AIRLINE IN NORTH AMERICA. DOES THIS UNDERLINE JUST HOW SATISFIED YOU
ARE WITH WESTJET’S BOEING EQUIPMENT?
We’ve certainly been very
thrilled with the 737 series and the family that we operate. It gives
us the ability to be flexible as to which type of aircraft we put on
which route at which time of the year. That’s certainly one of the most
important properties of the company. We can go without having
particular pilots trained on different types of aircraft. All the parts
of these aircraft are interchangeable, with very few exceptions. The
engines are interchangeable – it’s a very much more efficient way of
operating then the old way of having multiple aircraft types. We’re
very thrilled with the airplane, and probably the greatest strength of
these aircraft over the older ones, the 200 series aircraft, is their
effective range. We now regularly fly trips of up to six-and-a-half
hours, and that extends the range of the missions we can fly and of
course the markets we can fly to. So we’re very excited about that, and
of course it opens up many more opportunities for us in the future.

YOU
HAVE INTRODUCED PAY-PER-VIEW MOVIES AND LIVE SEATBACK TV, INCREASED
PASSENGER LEG ROOM AND SEAT PITCH, AND PROVIDED ONLINE CHECK-IN. HOW
HAVE THESE ADVANCES BEEN GREETED BY CUSTOMERS?
There’s no
question, each and every one of them has been extremely well received,
live TV probably being the most important entertainment and inflight
services product. The introduction of leather seats was in some circles
criticized, with critics saying we were spending more money than our
low-cost counterparts do. But point leather seats last five times as
long as cloth seats, so they’re quite functional and they actually are
quite low-cost. The longer leg room in the airplanes is really a
function of extending our stage lengths. It’s just not reasonable to
have the same sort of pitch on an aircraft that flies an average
distance of one or two hours as on one that flies to six. We’ve done
some things that are great for our passengers’ sake. By putting
ourselves in their shoes, we go the extra mile to make sure that we’re
providing the services that they require, and the services that
differentiate us from our competitors.

WHAT DO YOU THINK HAVE BEEN THE KEY FACTORS IN WESTJET’S SUCCESS, AND COULD YOU IDENTIFY A SINGLE KEY FACTOR ABOVE ALL OTHERS?
Oh,
absolutely. It’s our people. The commitment of our staff to our
company, because of profit sharing, because of shareholding, because of
the culture of the company, the sense of approval and the sense of
being appreciated, the sense of team effort and team success, the pride
they have for the company – all this reflects itself in the customer
service that our people provide.

COULD YOU OUTLINE THE LONG-TERM PLANS FOR WESTJET?
That’s
always a difficult question, because everybody finds it hard to define
long-term. In this industry I think long-term can be defined as one
week, the world changes so fast! I can only speak in general terms, and
that is that we will continue to add 10 to 15% more capacity. We will
continue to find and develop new markets, add frequency where it’s
needed, and continue to provide what I think is the best customer
service that an airline can provide and the best overall quality that
an airline can provide.

The rest I think sort of looks after
itself. There are probably some major strategies that we can look
towards over time, and that probably involves alliances or codeshare
arrangements with other carriers, but that’s a little ways off. There
will be more technology, more transborder, more frequent trips to more
destinations during the winter, and building frequency and building
connectivity.

THE NEW 737s THAT YOU’VE BEEN ACQUIRING SINCE 2001
ARE APPROXIMATELY 30% MORE FUEL-EFFICIENT THAN YOUR NOW-RETIRED 737-200
FLEET. WILL THIS HELP WESTJET MAINTAIN LOW FARES OVER THE NEXT COUPLE
OF YEARS?
Absolutely. If you draw on the wing-tip technology
that we’ve put on the aircraft on top of that, you’re talking about a
33 to 35% improvement in fuel efficiency. So yes, you’re absolutely
right. Where we’ve probably seen an equal benefit is the strength of
the Canadian dollar. The strength of that dollar, from 70 cents to 90
cents (US), has almost saved us somewhere in the vicinity of $100
million a year. So that’s been a tremendous offset to the escalating
price of fuel.

LAST YEAR WESTJET BECAME THE FIRST LOW-COST
CARRIER IN NORTH AMERICA TO OFFER TRANSBORDER SERVICE. HOW HAS THIS
WORKED TO DATE, AND DOES IT POINT THE WAY TO FURTHER INTERNATIONAL
EXPANSION?
No, I wouldn’t say that. It will certainly be an area
where we will focus more of our energies, with longer stage lengths
given the capabilities of the aircraft. We will be flying more
trans-border routes and we will be penetrating more of the US market
from Canada. There’s no question that that is probably the single
largest growth opportunity for us in the future.

IS THERE ANYTHING YOU WOULD LIKE TO ADD?
I
think you’ve covered it fairly well. We certainly see constant and
solid improvement in our business and in our load factors. We’ve
achieved a level of success that is really quite unique in the
industry, in that we’ve got three quarters now of consistent
improvement in load factors, in the face of increasing capacity. And
that is a phenomenon that this industry very, very rarely ever sees.
You usually have one increasing at the expense of the other. The fact
that we’ve pulled up all three in the last little while to me is a
great example of success and a tribute to our people. A general
thank-you to our people, who’ve done such a remarkable job, and to the
public for their support. Without the public we wouldn’t be where we
are today.