Features Operations
One on One: Mark Williams 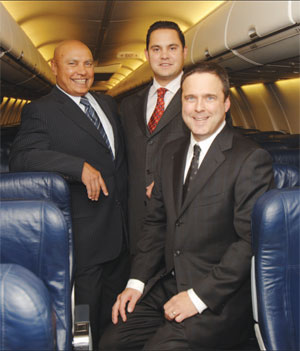 YOU ARE NOW ONE OF CANADA’S 100 FASTEST-GROWING COMPANIES. WHEN YOU
LOOK AT THE PROGRESS SINCE YOUR FIRST FLIGHT TO CUBA IN NOVEMBER, 2005,
WHAT KIND OF A JOURNEY HAS IT BEEN?
You
know, it’s always interesting when you try and start something up.
Colin Hunter, (Colin and Stephen Hunter own Sunwing Vacations),
approached me in May of 2004 with an interest in starting up an
airline. It really took us, once we got rolling, the better part of a
year-anda- half to get ready for our first flight. It’s always an
exciting accomplishment when the first plane gets off the ground. The
focus has really been on doing things a little bit differently than
everybody else. That goes from the type of routes we operate to the
type of service we have onboard the airplane.

HOW IMPORTANT IS THE B737-800 TO THE SUCCESSFUL FULFILMENT OF YOUR BUSINESS PLAN AS A LOW-FARE, FULL-SERVICE AIRLINE?
As
you know, obviously there’s a lot of things that go into making the
airline work well. The 737-800 is a key part of that. First of all,
they’re all relatively new aircraft, they’ve got good range for us,
they’re a very good size, with the winglets they’re the most
fuel-efficient aircraft in that size in the market, and when you’re
operating the aircraft with the type of hours we’re operating, having a
new aircraft with great fuel economy makes a big difference to us in
the kind of costs we have and therefore the prices we’re able to charge.

COULD YOU COMMENT ON HOW THE B737-800’S FUEL EFFICIENCY ALLOWS SUNWING TO PASS THE SAVINGS ON TO CUSTOMERS?
Obviously
being low-cost is very important for us. It’s a very, very competitive
market that everyone operates in, in Canada, and you need to get
advantages wherever you can. And for us, again that aircraft is not the
only part of the equation, but it’s a key part of the equation of how
we’ve been able to operate low-cost. We do two things with our lower
costs. One, obviously we pass lower costs on to our customers, and we
also made the decision that we would put more money into the product
onboard and pass some of the savings on in some areas into a higher
service level. On the longerhaul flights we do a bigger service then we
do on the short sectors, but even on the shorter-haul domestic routes
we do a choice of hot sandwich, we do a hot towel service, we’ve got
the leather seats, we do free movies, free head sets, and we’ve got
fantastic flight attendants. On the longer hauls, if you’re going south
on our flights, we’ve got a champagne service to start the flight, a
hot meal with complimentary wine, and all the other amenities as well.
In our winter operation, which is what we are focusing on now, 90% of
our passengers or more are going on vacation, and our philosophy is
that your vacation should start the minute you get on the airplane.

ONE
OF YOUR INNOVATIONS IS YOUR PREMIUM PACKAGE PLAN, OFFERING $400 WORTH
OF BENEFITS FOR ONLY $59 PER PERSON. HOW HAS THIS BEEN RECEIVED BY
CUSTOMERS?
When we put something out we want to get positive
feedback, and part of that is “how many people are interested in taking
the package?” We’ve had a very good response from it, and again,
primarily because in everything we do we try to offer fantastic value
for the money. So when you look at the types of amenities and benefits
you get from the package, it’s pretty easy for everyone to justify
wanting to spend the money to get the great set of benefits we offer.

YOUR
AIRLINE ALSO OFFERS AMENITIES THAT HAVE LONG SINCE DISAPPEARED FOR THE
ECONOMY CLASS PASSENGER ON MANY OTHER AIRLINES. HOW DOES THIS GIVE
SUNWING A COMPETITIVE EDGE?
It’s always a question of what
people want, and what they’re prepared to pay for. You’re in a
situation where often people won’t pay $10 or $20 more for the same
flight regardless of the service. But we’ve got low costs, and it’s
been our intention to put some of the cost savings we have on our
lowcost operations back into things that the customers can enjoy
onboard. We don’t do a lot of advertising, we’re very selective about
it, but we want to under-promise and overdeliver. We don’t worry about
what other airlines are doing – we’ve done this because we feel it’s
right for us, and other airlines are going to follow a different
business model based on what they feel is good for them. Right now the
product has been received extremely well and it’s allowed us to grow,
and that says to me that we’re on the right track with what we’re doing.

YOU
ALSO OFFER THE “WORRYFREE VACATION SECURITY PLAN,” ALLOWING TRAVELLERS
TO CANCEL THEIR VACATION FOR ANY REASON UP TO THREE HOURS PRIOR TO
DEPARTURE, AND A NO-AGE-LIMIT PLAN THAT INCLUDES MEDICAL EXPENSE
COVERAGE, POSTDEPARTURE TRIP INTERRUPTION PROTECTION, TRAVEL DELAY
PROTECTION, ETC. HOW IMPORTANT HAVE THESE INNOVATIONS BEEN TO MARKETING
AND DIFFERENTIATING YOUR AIRLINE?
We like to offer things that
other people don’t have. As you know, even with everyone booking in
advance and being excited about a trip, things still come up where
people can’t go. In the past, people bought medical insurance, but that
only covered you for medical emergencies. We thought that type of
policy should be expanded to something that would be more readily used
by people. So, if you book a trip for March break in January and all of
a sudden something comes up at work and you can’t go, now we can say
“fine, that’s no problem.” You can cancel your trip and we’ll refund
the purchase price or provide you with travel vouchers, and you can
take a trip at another time. That’s the product people want, and
Sunwing is the only place to get it.

RECENTLY SUNWING ANNOUNCED
FLIGHTS TO THE SOUTH FROM CALGARY AND WINNIPEG ON AEROMEXICO 737-700S.
HOW DO YOU ANTICIPATE YOUR EXPANSION INTO WESTERN CANADA WILL BE
RECEIVED?
We’re always positive about going into new markets –
we have a great product, and great prices. Everywhere we’ve gone the
product’s been really well received. That’s why, as you mentioned,
we’re one of the fastest growing companies in Canada. We’ve got a
great, established market now in Ontario – we fly out of more gateways
in Ontario than anyone else. We’ve recently expanded into the Quebec
market, and we’re operating flights out of Eastern Canada this winter,
and we look for the same kind of thing out of Western Canada as well.
We believe that there’s room in the market, and the more choices
consumers have the better off they are.

YOU HAVE RECENTLY
EXPANDED DRAMATICALLY IN ATLANTIC CANADA, INCLUDING ALL FOUR ATLANTIC
PROVINCES. WHY DID SUNWING EXPAND SERVICE SO QUICKLY IN ATLANTIC CANADA?
We
looked at the market and felt there was a real need for our product. A
lot of the places we’re looking at doing direct flights to southern
destinations in the winter haven’t had service at all, or haven’t had
service for a long time. We did some service last year in Ontario out
of Sudbury, which is a smaller market. I’d say for the first year of
operation we were generally pleased with the way things went. We
operated out of Halifax and St. John’s last year, and after discussing
with people in the communities, the airport authority people, travel
agents, and our customers in the region, everyone felt there was a
market for our product in those areas. We rely on our travel agent
partners to sell our product. They were very supportive of us in
Halifax and St. John’s last year. Certainly when you look at Sydney and
Gander as an example of smaller cities, and we’re also doing
Fredericton, Moncton, Saint John and Charlottetown, everyone in those
communities seems extremely excited about us being there.

WILL YOU BE STICKING WITH THE 737-800 PRIMARILY, OR DO YOU SEE NEW AIRCRAFT TYPES ENTERING YOUR FLEET?
Obviously
the 800s been a fantastic airplane for us. It operates really well,
it’s got great maintenance reliability, good range and great fuel
costs. So that’s going to be the core of our fleet as we grow. I don’t
like getting into numbers or other fleet types we may be looking at
because I don’t want to give anything away, so I’ll just say we always
look at opportunities to grow. Depending on what markets you’re in, it
requires different aircraft types.

WHAT DO YOU THINK THE FUTURE HOLDS FOR SUNWING? CAN YOU FORESEE A MOVE POTENTIALLY INTO SCHEDULED OPERATIONS?
I
think it’s been a good start for Sunwing. I’m really proud of the
airline that’s been built here and the team that we’ve got in place. A
big part of it is the staff, in fact it’s the most critical part. We’ve
got fantastic flight attendants, we’ve got great crews, great people on
the ground, and that comes from hiring well and training well. I
believe that’s what sets us apart, and if other people want to try to
do what we’re doing, they’re going to have a difficult time doing it as
well as we do because of our employees.

You know, we were
talking before about sticking to our niche. Where we’ve seen other
airlines do not so well in the past is when people forget what they’re
good at. Our market is leisure traffic – we know the market well and we
serve it well. Even in our domestic program this summer we were
focusing on leisure traffic, on people going back home to visit friends
and family. I don’t anticipate doing anything other than that into the
future. I wouldn’t look to Sunwing to get heavily into the scheduled
market…. We look at opportunities wherever they are, but we know what
we’re good at and we’re comfortable in that market. I believe there’s
enough growth there that we don’t need to focus on things that we don’t
know as well.