Features Operations
One on One: Robert (Bob) Davis 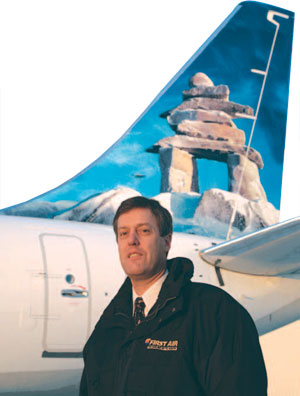 WHAT HAVE BEEN SOME OF THE KEY FACTORS THAT HAVE MADE FIRST AIR CANADA’S LEADING NORTHERN AIRLINE?
We’ll
actually be celebrating our 60th year in business in 2006, so that’s
something we’re pretty proud of. We’ve been providing continuous
service in the northernmost parts of Canada all that time, and have
been successful doing it. We use a little secret in our business that
we don’t like to share too much. Our secret to success is that we try
very hard to spend less than we make! But really, the key to our
success is that we’re a niche player. We’re kind of a conglomerate of
small businesses, and we operate across a wide geographic area,
offering a number of services, scheduled, charter and other types of
services. We have a pretty diverse set of revenue streams, and we also
operate niche-type airplanes that are specially outfitted for the North
– combi aircraft specifically – that give us a wide range of
flexibility. We also operate a wide range of aircraft types to
accommodate all of the different markets in both cargo and passenger
services. We also have a Hercules (C-130) business, operating the only
civilian-registered Hercules in Canada.

HOW BIG A ROLE DOES INNOVATION PLAY AT FIRST AIR?
Very
much, because there are special needs in the North. The use of combi
aircraft is prevalent, and it’s the best way to serve small, unique
markets. So we’ve done a lot of our own engineering work. For example,
we’ve incorporated all the latest technology on our recently acquired
ATR42 aircraft. We want them to be a 20-year solution for the turboprop
to the smaller markets. The aircraft has been equipped with a C-Class
compliant cargo compartment while maintaining the flexibility of being
able to move the bulkhead in the cabin to accommodate more cargo or
less seating or the reverse of that, or even go to a full freighter. To
do that was a bit of an engineering challenge, given the requirement to
meet C-Class fire containment. We’ve also outfitted the airplanes with
the latest in compasses and laser gyros to keep us on the leading edge.

WE SEE THE FIRST AIR B727 FLEET OPERATING INTO LOCATIONS WITH LIMITED TAKEOFF AND LANDING DISTANCES. HOW UNIQUE IS THIS?
Yes,
we do use the jet aircraft in unique situations for the most part, and
on charter work it’s usually unique stuff. We have done work onto ice
strips and shorter gravel strips. It is quite a challenge; of course,
we can do it quite safely if we’re properly prepared for it. I would
say though it’s more of a declining segment of our business. Flying
into shorter strips is more into the charter side for mining activity,
or tourist and fishing and hunting. The airplane is quite good for that.

HOW DO YOUR CARGO LOADS DIFFER FROM THOSE IN THE SOUTH?
The
predominant portion of the cargo that we do carry in the North is food
items, and that’s something we have developed quite a good skill set at
delivering. In the North where we fly there are no roads or railways
and a very limited marine season, so to get foodstuffs in there, by
airplane is the only way. We’re also what’s known as a one-way cargo
airline; there’s really no cargo shipment from the North to the South.
Our airplanes are pretty much full going north and empty coming south,
and as I said the predominance of the cargo shipped is food. We have a
lot of infrastructure to support that, a lot of it is perishable or
frozen goods so special cargo handling techniques, loading and
unloading, and what have you (are very important).

HOW DID YOU DEVELOP YOUR INHOUSE MRO PROFICIENCY?
We
developed a strong technical backbone from inside the organization.
Flying in such remote regions, there are no external services or
third-party services obviously available at hand. If we didn’t look
after ourselves, we were going to be stuck. So the company did develop
quite a strong engineering and maintenance and repair capability, and
today we operate a component overhaul shop as a separate business
segment within the organization. I’ll go back to my original comment,
saying that we’re a conglomerate of small businesses. We consider this
a business in and of itself; it generates its own bottom-line profits
for the company, and we receive landing gears, generators, cabin
superchargers for overhauls from as far away as Sweden.

WHAT KINDS OF UNIQUE AIRCRAFT, ESPECIALLY B727 VARIANTS, HAS FIRST AIR DEPLOYED?
The
Boeing 727 has been a fantastic aircraft for us. We operate three combi
727s at present and two freighters. The combis we operate on scheduled
routes – we have both 100 series and 200 series airplanes – the 200
series has been modified to be C-Class compliant in the cargo
compartment as well.

However, with the latest spike in oil
prices over the last year or so, it’s really put an economic
obsolescence factor into the use of the 727s. So, in fact, we’re
starting to move away from that aircraft, we’re retiring two 727-100s
this year and replacing them with the B737-200. And we’re also, to look
after the freight side of our business, we will continue to operate
727-200 series freighters for another year or so, but our intention is
to replace that airplane with the Boeing 757 or 767 within the next
year.

HOW HAS FIRST AIR CAPITALIZED ON THE VERY DIVERSE TYPES OF FLYING REQUIRED IN NORTHERN OPERATIONS?
On
the charter side of our business we’re a niche player. We don’t have
the right equipment to go up against the larger carriers doing sunspot
charters and what have you, so we do see that as our niche – I guess
you could call it “all the business left over that nobody else wants to
do.” We do lot of charters moving car parts down into Mexico, moving
aircraft engines around the world for other airlines, and things like
that. And again it comes down to, we have the right kinds of airplanes
to do that kind of work, and we also have the right style of
operations. We have a great set of employees who know how to get the
job done, know how to operate in many different conditions. We are out
of the Twin Otter business now; that was historically one of our very
strong areas. We did do a lot of North Pole/South Pole work with Twin
Otter aircraft.

HAS FIRST AIR HELPED BLAZE THE TRAIL IN PROVIDING MRO/TECH SERVICES AND GROUND HANDLING?
I
don’t know if we blazed the trail, but I think again it goes back to
our original operating philosophy – we are a conglomerate of small
businesses. We do offer handling services and have done that quite
successfully and profitably for years. Our component shop, the actual
airline side of things, is very diversified. So I guess in a way we
maybe were the leaders there, and we find it a very successful business
model to incorporate. Some of it’s changed over the years, the last few
years certainly with 9/11, the change in the rate of exchange, the
amount of surplus equipment for shops that’s around. So some of it has
been a little more challenging lately, but again we believe we’re of
the size at around 1,000 employees that we can move away from the
markets that are weak and toward the markets that are stronger.

HOW HAS FIRST AIR’S PRESENCE AS A TRUE INNOVATOR AND OPERATIONAL LEADER CHANGED NORTHERN TRAVEL?
We’ve
always been a leader in introducing new services and new types of
airplanes to the market. I come to our latest two initiatives – one is
to replace the turboprop aircraft with newer- generation equipment and
offer our customers better cabin comfort, speed, and whatnot. The
second is to look at our route network – we’re going to 28 destinations
in the North, we operate the North’s largest integrated jet and
turboprop network, and we have been rewarded by customers in the area
with a very good market share. Medical travel represents a significant
portion of our business, and the transportation of food. First Air is a
very dominant in the cargo business in the North. Our route network
provides people with a one-stop solution for all their transportation
needs, from ordering a quart of milk in the South to receiving it
anywhere you want in the North. We provide a very good and reliable
service to many communities, where nobody else is willing to even take
the business risk to fly to them.

HOW PROUD IS FIRST AIR OF THIS
ACHIEVEMENT, AND DO YOU THINK THE WAYS IN WHICH YOU’VE POSITIVELY
INFLUENCED NORTHERN CANADA ARE BECOMING MORE RECOGNIZED?
We hope
they are. I believe it is being more recognized, because again through
the loyalty of the customers that reward us with their business, we do
have a very good market share and people do keep coming back to us. And
we’re involved as much as we can be in the communities – we provide a
lot of local employment, we reinvest a lot of our money back into the
North in new infrastructure and new services and whatnot, and we do a
lot to help the local youth community in supporting sporting events,
putting on hockey tournaments, all that sort of stuff. Myself, I’ve put
on a charity ball in Iqaluit which will raise $70,000 that will be
donated to two local charities, one to purchase medical equipment for
the hospital and another one for suicide prevention. I think these
things are well recognized, and we sure enjoy giving something back to
the communities that support us so well.

WITH THE ACCELERATING
PACE OF NEW OPPORTUNITIES IN NORTHERN CANADA, HOW IS FIRST AIR HELPING
TO DELIVER NEW PROSPERITY TO THE REGION?
There are two areas of
the North that are really primary to improving its economics, and those
are the mineral and exploration area as well as tourism. In the mineral
and exploration area, we’re certainly involved there. We do a lot of
work in support of existing mining companies; our aircraft are used a
lot for exploration, to develop new mines. We’re certainly keeping a
close eye on what may happen with pipelines, the proposed pipeline in
the Mackenzie Valley. Airplanes play a very large role in these
development projects again because there are no roads or rail, and a
limited marine season. On the tourist side, because most of the tourist
seasons are relatively short, travel to the North is expensive. So we
try to work with outfitters and tour operators to get a competitive
price so we can offer a competitive tourism product in the North, which
is a challenge to do again because it is a long way away, and it
increases the cost.

COULD YOU COMMENT MORE ON CURRENT AND FUTURE PLANS FOR FLEET ACQUISITION AND RENEWAL?
Our
focus has been on replacing the turboprop airplanes, we’re pretty much
through that program as far as we can go at this time. We still operate
three 748s. We have to continue using them because there are a few
runways still in the North that won’t accommodate the ATR42. Once those
runways are lengthened we will go to an all-ATR42 fleet. So our focus
right now is on replacing our 727 freighter airplanes, and on that
we’re just finalizing the evaluation of whether to go to the 757 or
767. After that project is complete we will then be looking at trying
to find a common type of airplane to replace our 737 fleet, and that
will start in a three-to-five- year time frame. So we’ll continue to
operate 737 airplanes on our core-scheduled services for three-to-five
years, and hopefully have a 757 or 767 on the freighter market as soon
as possible.