Features Operations
One on One: Robert Milton 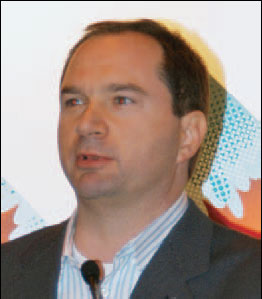 AS CHAIRMAN AND CEO OF ACE YOU ARE SEPARATING YOURSELF FROM ALL YOU
DESCRIBED AS "FUN" ABOUT RUNNING AN AIRLINE. WHY?
I
am happy to trade fun for the satisfaction of seeing this company and
its employees on a stable, competitive footing. Before handing over the
day-to-day operation of Air Canada to Montie [Brewer] I was not having
as much fun as when I was vice-president of marketing or COO. For me
the fun really ended when I arrived at the realization that
profitability could no longer be achieved simply by designing the best
schedules for the best network and using the right aircraft. Labour
costs had simply grown too much in relation to those at the low cost
carriers and a correction was sorely needed.

DOES THIS MEAN THE HEAVY LIFTING IS OVER?
In
this business, the heavy lifting is never over. Air Canada has shed the
weight of a legacy carrier with its roots as a government-owned Crown
Corporation. The airline has reinvented itself into a nimble carrier
for the future. What we have to do now is execute what we have
initiated on the foundation of a very strong balance sheet. That
includes upgrading our product.

HAS THIS EXPERIENCE CHALLENGED SOME ASSUMPTIONS ABOUT CANADIAN AIR TRANSPORT?
Our
experience highlights the fact that commercial airlines in Canada are
subject to a number of factors they cannot control, including the
privatized and fiscally ungoverned air traffic control system and
airports. These are true, natural monopolies. As we get our costs under
control it’s disturbing to see that – other than fuel – the only cost
line item that is continuing to go up is that of the monopoly service
providers. Canadians pay more governmentmandated air travel fees than
anyone else in the world.

WE HAVE WATCHED US AIRLINES RETURN TO CHAPTER 11 SHORTLY AFTER EXITING. WHAT’S THE DIFFERENCE WITH AIR CANADA?
Globally,
many airlines have not sufficiently come to grips with just how bad the
revenue environment will become as low-cost carriers proliferate. Air
Canada knew early on what a system-wide domestic meltdown in revenues
looked like. We realized that low-cost carriers were here to stay and
that the legacy airline model was broken forever.

The US
industry is more unstable with massive excess capacity and the
inability of American carriers to move capacity elsewhere. One key
advantage Air Canada has over US airlines is unfettered access to
international routes. US carriers must compete with each other for
rights to fly to a certain country.

US airlines have yet to make
significant, customerfriendly changes such as eliminating the required
Saturday night stayover or implementing more transparent,
easy-to-understand fare structures. Customer response to Air Canada’s
simplified fare structure and web product has been overwhelmingly
positive and was a major contributor to the record load factors we have
experienced for the past seven months.

Finally, we approached
the need to reduce labour costs from a different angle than the US
carriers. Rather than focusing on salary cuts, which are more onerous
on employees, we went after productivity gains by negotiating work-rule
changes in union contracts. US airlines in reorganization have made a
habit of continually going back to their unions for more pay cuts.

YOU HAVE BEEN A CEO THROUGH AN UNPRECEDENTED TIME IN AVIATION. HAVE WE IN THE MEDIA BEEN TOO QUICK TO CRITICIZE?
Incredibly,
I am now the longest-serving head of a North American airline and most
senior in service on the Star Alliance Board. When I step back from the
situation, I know that I’m not singled out for media criticism. I am
surrounded by Canadian CEOs who’ve simply had the responsibility of
fixing their companies in broken industries. I do get frustrated when
CEOs are criticized in this country for taking tough steps or for
trying something different.

When you think of it, you cannot
name another airline that has been through as much as Air Canada has.
We were among the first to feel the effects of the burst of the
high-tech bubble. We were the only market outside of the US to have had
our airspace closed after 9/11 – a market where we probably had more
flights than all international carriers combined. We were the only
non-Asian country to have been named by the World Health Organization
as a SARS hotspot.

I call it a perfect storm. And it was
happening against the backdrop of some of the highest government fees
in the world. The bottom line is, whether it’s the public, employees or
the media, change is tough.

WHAT ARE YOU LOOKING FORWARD TO MOST OVER THE NEXT FEW YEARS?
At
this stage I’m focused on seeing Air Canada move successfully toward
the redefined future I know it has. I see the Air Canada of the future
being recognized as one of the half-dozen best international airlines –
connecting regions everywhere in the world, with domestic services
still representing an important but smaller share of total revenue. No
other airline of our size and capability is in the same enviable
position.


Related
ONE ON ONE with Robert Milton
One on One: With Robert Deluce
One on One: Robert (Bob) Davis
Ottawa Perspective: Free Trade in Air Transport?