Features Operations
One on One with Michel Leblanc, CEO Jetsgo Corporation

In Jetsgo's first year of operation, it carried 50% more passengers than forecast. 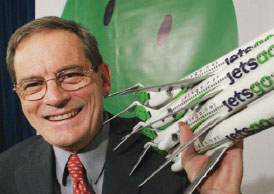 In your first year of operation, Jetsgo carried 50% more passengers
than forecast. What is driving such growth?
Having
the right business plan at the right time. We were the first airline in
Eastern Canada to deploy the low-cost model following the big void left
with the demise of Canada 3000. We were also lucky in sourcing
airplanes at the right price. Our success is also a function of
in-flight and airport services. Our people are young, eager. We give
them a lot of leeway, and it shows. The atmosphere in the Jetsgo cabin
is different than any other airline in Canada.

Some industry observers suggest your success is in two-for-one and other promotions that aren’t sustainable.
The
first thing they need to understand is if you launch an airline that is
a copycat of everything that has been done before, then you don’t bring
anything new to the marketplace. If you don’t bring anything new, why
are you in the marketplace? Creative promotions like ‘two-for-one’ and
loonie sales are a key part of Jetsgo’s marketing. The only guys it
doesn’t please are our competitors – and we’re not in business to
please our competitors.

Attracting passengers who would use surface transport is also part of your marketing strategy.
If
you are only going after existing market share, sooner or later you’re
going to get into trouble. The guy who has the share will not let it
get away so easy. We have to be effective in stimulating new markets
away from surface travel to air. The “Are We There Yet?” promotion was
clearly directed at that market. We’ve succeeded when I see VIA Rail
cutting prices and advertising on some routes where they haven’t
advertised for years.