Features Operations
One on One: With Robert Deluce 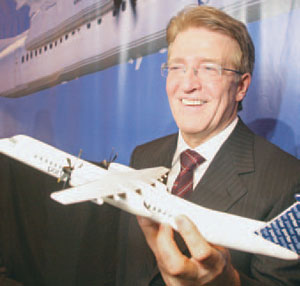 WHY IS NOW THE RIGHT TIME TO LAUNCH THIS AIRLINE?
The
market is looking for additional choice, and at this particular moment
the operations out of Toronto City Centre Airport are at an alltime
low. There’s an expectation that with Porter coming on board, and with
increased frequencies and with connections to additional points, that
obviously will be good for the industry and provide an alternative to
that which is offered by the mainline carriers. So I think we’re
hitting it at a point in time when traffic is robust, and there’s
demand, particularly by time-sensitive business travellers, for a new
and innovative product. And of course we’re sitting here with nowhere
to go but up in terms of traffic growth because the previous carrier
certainly allowed the traffic to drift down to almost a point where it
was non-existent. And I think we can improve upon that substantially.
The timing is certainly right all the way around.

WHAT WILL DISTINGUISH PORTER AIRLINES FROM ITS PRIMARY COMPETITORS?
I
think there are a number of things that will distinguish us. We are
targeting the timesensitive business traveller, and at the same time
because of our location we are offering a service that during certain
times of the day, midday, and during the season will also very much
appeal to the leisure traveller. Our business concept is really based
on speed, convenience and service. I think it’s a lot easier when
you’re starting a new airline, whether you’re at Southwest or JetBlue
or whatever, to build in from day one a corporate culture that lends
itself to service. We don’t have any of the baggage that some of the
legacy carriers obviously have that inhibits their ability to properly
service customers. I think we will have a very fresh attitude toward
our marketplace, and we’ll be doing everything we can to make the
traveller’s journey convenient and efficient right from start to finish.

WHY DID PORTER CHOOSE THE Q400 FOR ITS FLEET?
The
70-seat Q400 is the absolute best choice in terms of an aircraft. We’re
operating from an urban airport, it’s environmentally sensitive, and it
was important to have a leading-edge aircraft in terms of
(noise/emissions) suppression and sensitivity. The aircraft meets the
requirements that are set out in the agreement between the city and the
port authority and the federal government, the 50- year tripartite
agreement that has existed since 1983. It precludes the use of jets,
other than for air ambulance or medevac. So picking a turboprop that
could operate from here in an efficient manner and with the lower fuel
consumption was very important.

But there are a lot of
turboprops that could operate from this airport; picking the Q400, we
think, was the right decision, because the Q400 is really a turboprop
that thinks it’s a jet. It has cruise speeds that resemble those of
typical regional jets, and in any of your short-haul regional
marketplaces we will have block times that are comparable to or in some
cases even shorter than those that you would get on a regional jet. So
the Q400 was ideal for fuel, for the environment, and from the point of
view of meeting the restrictions that were set out in the tripartite
agreement. All those things made our choice of a Canadian-built,
Toronto-built aircraft pretty easy. It’s an absolutely great aircraft,
and the PW150 (engine) is a beautiful piece of machinery. The aircraft
holds certain climbto- cruise records for certain classes of aircraft.
It really climbs at a good rate, and that helps with noise abatement.
Because of that high climb rate it really leaves quite a small noise
footprint in the surrounding area, and that also is an important
consideration. Also it’s 30 per cent to 40 per cent more fuel efficient
than a comparable regional jet – that makes pretty good economics, and
it makes the Q400 all the more attractive.

DO YOU THINK PORTER’S
CUSTOMERS WILL APPRECIATE YOUR NEW TERMINAL AND THE NEW FERRY AND
TRANSFER FACILITIES BEING BUILT BY THE TORONTO PORT AUTHORITY?
Very
much so. Those are important ingredients that are needed to improve the
overall passenger experience. Let’s face it – we’re competing with
Pearson. Pearson has some very good facilities, and so it’s important
for us to have facilities that also meet the requirements of our
passengers, having a brand-new, updated, state-of-the-art ferry that
can transverse that 400-foot gap with ease.

In the other
facilities that Porter is involved in, including the improvements to
the ramp and to the slip area, loading piers, they’re all very much
necessary. This is a facility that hasn’t had much in the way of
capital investment for a good number of years, and it really did need
to be improved. Those facilities are now well under way, and they’ll
all come together in the late summer/early fall, in time for a start-up
by Porter into some of the key markets we’ll be flying into.

COULD YOU COMMENT ON THE EMPLOYMENT AND ECONOMIC DEVELOPMENT ACTIVITY THAT PORTER AIRLINES WILL GENERATE?
We
will employ directly, by the time we take in a good number of our firm
and option aircraft, in excess of 500 people. And there will be a
number of indirect jobs created with the hotels, tourism, restaurants,
and other industries, all in close proximity to the airport.

Equally
important I think is that our order is significant. Anytime you put in
an order for ten firm and ten option aircraft, that’s big news for the
aerospace industry, and in this case the particular plant, the
Bombardier Downsview plant, will benefit considerably from the economic
stimulus that comes from Porter. The aerospace industry in general
within Ontario and Canada will benefit from it. The studies that we
have done would suggest that there is somewhere in excess of $100
million worth of economic benefit being generated today by this airport
to the City of Toronto. With our utilization of the airplanes that we
have on order, and serving a good number of those destinations that
we’ll be targeting, we estimate that the economic benefit will be
somewhere in excess of $800 million annually to Toronto, and that’s a
significant number.

There are a lot of people who are looking
forward to Porter being up and running, and the fact that we’re well
capitalized, that we’re going about this in a very methodical and
business-like manner, I think it speaks to the fact that we’re here and
we’re putting in place something that is very sustainable longterm.

A
LOT OF PEOPLE ON THE PORTER TEAM, SUCH AS DON CARTY, ARE VERY WELL
KNOWN IN OUR INDUSTRY. COULD YOU COMMENT ON THE INDUSTRY VETERANS
WORKING TO SHAPE THE PORTER TEAM?
It’s important to point out
Don’s direct involvement – Don came aboard as chairman and as an
early-stage investor, and of course Don’s one of the betterknown
Canadians who are out there with North American and international
aviation experience. He brings certainly additional credibility, and an
experience level that’s hard to duplicate. Beyond Don and just looking
directly into our management team, we have well in excess of 300
person-years of aviation experience within our senior management ranks,
and that’s a pretty healthy level of experience to draw upon. So I feel
extremely fortunate to have such a capable group in place, and
obviously that will help immensely in terms of our start-up and in our
sustainability longer-term.

YOUR INVESTORS HAVE COMMITTED OVER
$125 MILLION FOR THIS START-UP. WHAT DOES THIS SAY ABOUT THE FINANCIAL
COMMUNITY’S DEGREE OF CONFIDENCE IN PORTER?
I guess we almost
feel humbled, and certainly feel fortunate to have that level of
interest and commitment. We have put together an equity raise that’s
second only, as far as we’re aware, to the JetBlue equity raise a few
years back. Having said that, we’re cognizant of the fact that there’s
a lot of things to do and to put in place in order to have a successful
airline. What we’re doing is just focusing on ensuring that we have all
of the right things in place that will make Porter a good success.

COULD YOU COMMENT ON PORTER’S ANTICIPATED DESTINATIONS WITHIN YOUR 500-NM OPERATING RADIUS?
We
have selected 17 destinations, and they are all destinations that have
a considerable amount of origin and destination traffic. In other
words, they don’t depend on connecting traffic. Now we’ve purposely
designed our business plan in that manner; we don’t factor in any
connecting traffic, even though we do know that we’ll have the
opportunity to carry some connecting traffic.

The destinations
that come to mind in terms of being in the first rung of places that
we’ll serve, not all of them at once, but over time as we receive
deliveries of aircraft, will include places like Ottawa, Montreal, New
York, Chicago, Boston, Philadelphia, Washington, Thunder Bay; those are
the places with the most amount of O & D traffic. And beyond that
there are places like Quebec City and Windsor, and in Northern Ontario
places that include Sudbury, Sault Ste. Marie and Timmins, and in the
U.S. there are places like Detroit, Cleveland, Cincinnati and
Pittsburgh that also will be added to our roster, and I think we’ll end
up with a nice bit of coverage, particularly in the northeastern part
of the US and in Ontario and Quebec. I think we’ll have a route network
that’s efficient and that serves the requirements of our short-haul
passengers quite nicely.

Just judging by the number of phone
calls we’re getting and the number of inquiries, there are a lot of
people that are wanting this service to start quite quickly. It will
all come together in due course, and certainly by late summer or early
fall we’ll be under way, and we look forward to that.

WHERE DO YOU PROJECT THE AIRLINE WILL BE A FEW YEARS FROM NOW?
Our
focus right now is on the short-haul regional marketplace. We’re
particularly focused on having one main hub from Toronto; but having
said that, if you were to look around at companies that are
successfully operating the Q400, today you’ll find that the aircraft is
used out there two-and-a-half to two-hoursand- fifty-minutes on certain
routes, particularly with SAS and with others in Europe. It’s providing
a good level of service, and with good block times for those sort of
destinations.

We are focused on 500 nautical miles or less,
which means in our particular instance that we’re going to have a block
time of about an hour-and-five-minutes or an hour-and-six-minutes on
average. Some of them will be shorter, some a little longer, but the
short-haul stuff is what we’re looking at, and we want to keep the
business plan quite simplified in terms of route structure at this
point. We’ll cross additional hurdles and additional requests for other
destinations when we get to them.