News Products
Over The Top Weather 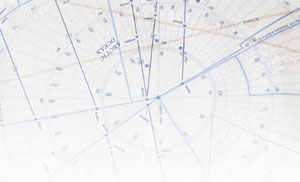 Until recently, the only regularly scheduled flights around the North
Pole were relegated to a roly-poly man with a white beard and red suit;
even then there was only one flight a year. But the opening up of
Russian airspace in the last few years created new opportunities and
today many airlines are launching daily flights over the top. But this
newfound flight path comes with many restrictions and meteorological
considerations.

Why
the sudden urge to take it over the top? Warren Lampitt, general
manager, technical programs, flight operations, Air Canada, explained:
“It knocks off at least one hour of flying time.” And one hour equates
to thousands of dollars in fuel savings on a four-engine jumbo jet.
(The A340-500’s thirst for fuel is about 9,000 kg/h). “Because less
fuel is required, more baggage and cargo can be added, plus no fuel
stop is needed— all adding to the bottom line,” Lampitt. Additionally,
turbulence is less prevalent because jet streams are busy corkscrewing
the globe further south and there are no weather fronts to contend
with. And, obviously, crew duty time is also lessened. It may not seem
like an issue but easily enters the equation if a less productive
routing is flown.

Space Weather Hurdles
North Pole
flights do present some unusual obstacles, especially concerning space
weather. Space weather, as used in this instance, is defined as the
conditions created on the earth by activity on the surface of the sun.
The potential impact of electromagnetic and solar radiation has been
categorized by the U.S. National Oceanic and Atmospheric Administration
(NOAA – see sidebar). Cosmic radiation levels are one of the concerning
factors from space weather. NOAA ranks these on a severity scale, from
one to five. S1 and S2 allow a safe journey but an S5 equates to about
100 chest x-rays. Forecast levels of S4 and S5 prohibit polar flights
with S3 imposing lower altitudes or a more southern polar route.

(Aircrew
and passengers run a slight risk of cosmic radiation particularly at
higher flight levels, but this increases toward the poles. Four factors
affect the potential dose of cosmic radiation: latitude, altitude,
flight duration, and solar activity. When travelling at higher
altitudes the atmosphere offers less inherent protection, lessening
toward the poles. This is not only because the atmosphere is thinner at
the poles, but Earth’s protective magnetic field also decreases near
the pole. Incoming cosmic radiation particles are deflected by Earth's
magnetic field. In general, radiation shielding is greatest at the
equator and decreases as one goes north or south.)

Another
element of flight impacted by space weather is radio reception. Again,
NOAA broadcasts a fivelevel range of severity. Some aircraft radios, HF
(High Frequency) work on the principle of bouncing transmissions off
the ionosphere allowing for long-distance communications. An R5 rating
implies radio communication would not be possible for hours, making
long-range communication impossible with the aircraft and air traffic
control. Luckily, FANS (Future Air Navigation Systems) through the use
of satellites, lessen the need for HF and played a major role in
implementing polar flights. Lampitt notes that due to difficulties with
SATCOM (satellite communication) Datalink and HF Voice communications
at high latitudes, Air Canada will be implementing HF Datalink on the
B777 fleet when it enters service.

Yet another parameter of
space weather is the Geomagnetic Storm Scale, and it also is ranked one
to five. A G1 rating indicates slight power grid fluctuations and minor
impact to satellites, but an extreme G5 causes possible power grids to
collapse, damaged transformers and radio blackout in many areas for one
to two days. Thus satellite navigation and communication unreliability
coupled with possible ground power outages would ground polar
operations.

Adapting to Space Weather
What can be done
about it? Airlines using these routes have adopted the policy flights
will not be conducted on polar routes if solar radiation, radio
blackout, or geomagnetic storm activity is at level 4 or 5. Solar
radiation at level 3 requires polar flights to be conducted at FL310 or
below.

As well, there are actually four polar routes with Polar
Route 2 being the closest to the pole, about 60 miles away. (No route
exactly traverses the pole). Hours before each polar flight, flight
dispatch determines whether space weather is deemed safe. Sometimes
varying the route or changing a flight level guarantees a safe flight.

Frigid factors
Another
weather contender is the extreme cold found in northern Canada and
Siberia. This poses the problem of fuel freezing. Flights into areas of
–65°Celsius must be restricted to 90 minutes. Depending on aircraft,
engine type and jet fuel type, fuel boarded may be analyzed and the
actual fuel freeze point determined. Flight Dispatch may datalink the
actual fuel freeze temperature to the flight after it is airborne.

On
a recent flight of mine, this very problem came up as the jet fuel
cooled to below –40°C, triggering a message in the fuel temperature
monitoring system. The fuel boarded had a threshold of –47°C, making
immediate action unwarranted. If the conditions persisted, procedures
are either to descend into warmer air or speed up. Descending burns
more fuel and increasing speed also requires more fuel in the tanks and
is less effective. Luckily, temperatures were forecast to warm – and
they did.

Yet another consideration is availability of suitable
airports in case of serious medical situations or emergencies,
particularly in Arctic winters. It’s why two Arctic survival suits are
packed with environmental clothing in case we have to exit the airplane
for coordination of services after landing. (Rest assured the junior
pilot will be delegated the task of donning the clothing.) One airport
in close proximity of the transpolar route is Tiksi, Russia with
briefing notes highlighting that it lies in the coldest region of the
northern hemisphere with temperatures as low as –71°C. A recent company
memo suggested only landing at these airports in situations of peril.

Just
this last Christmas enroute to Hong Kong our routing took us over the
top via Polar Route 1. (Seniority dictated I would have the honour of
spending Christmas abroad.) I’m not certain, even though my last
medical confirmed 20/20 eyesight, but with the combination of the
northern lights and ice crystals below, there appeared to be a glow in
the vicinity of the North Pole. Was it Santa’s workshop getting ready
for his departure?

Radio Blackout Scale
R5
– Extreme: Complete HF radio blackout on the entire sunlit side of the
Earth for a number of hours, navigational outages on sunlit side for
many hours.

R4 – Severe: One- to two-hour HF blackout on sunlit side of Earth, minor satellite navigation disruptions.

Geomagnetic Storm Scale
G5
– Extreme: Power grids can collapse, transformers are damaged,
spacecraft extensive surface charging, HF radio blackout in many areas
for one to two days, low frequency radio out for hours, aurora seen as
low as the equator.